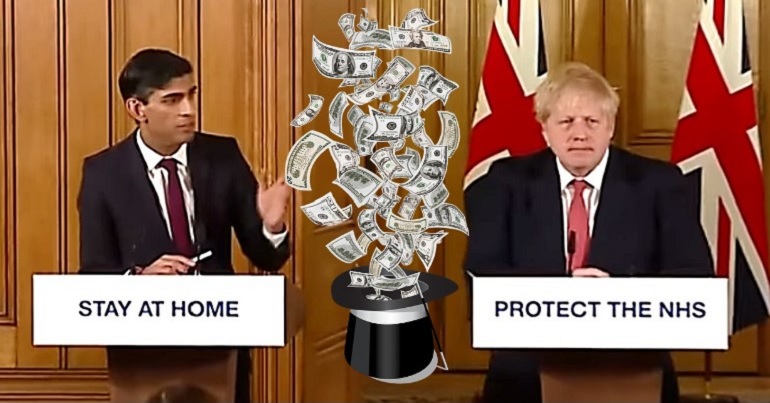 In the wake of the coronavirus (COVID-19) pandemic, the UK government is reportedly drawing up plans for another private sector bailout. If the Tories push ahead with it, it will be scarily reminiscent of the 2008 bailout of the banks. And it could spell disaster for years to come.

As The Canary previously reported, the airline industry is in trouble. Richard Branson’s Virgin Atlantic went cap-in-hand to the government, asking for £7.5bn in credit facilities for the collapsing sector. And now, it appears the UK government has listened.

On Saturday 21 March, the Financial Times (FT) reported that the Tories were considering bailing out UK airlines. It said:

The UK government is drawing up plans to buy equity stakes in airlines and other companies hardest hit by the coronavirus crisis after being warned that the economic packages it has announced so far will not be enough to save them.

The FT noted how these plans were similar to the ones that bailed out the banks in the wake of the 2008 financial crash. Although it also reported that the final plan may be more complex than that. FT sources noted how the Tories’ bailout package could extend to other failing businesses. Because apparently:

some companies had entered the coronavirus crisis with too much debt which would restrict how much extra borrowing they could take on.

In other words, failing companies won’t be able to borrow money from anywhere else. So, the only option left is the public purse. And tax expert Richard Murphy has already spotted the major flaws in the Tories’ plans.

For heaven’s sake, they’re bust. Don’t buy into them. Just nationalise them via a pre-packaged administration. Of all things that are a priority right now bailing out airline shareholders comes in at 3,587th https://t.co/tHYbndjDQ4

“They’re bust” is the key phrase from Murphy’s tweet. Because well before coronavirus, the airline industry was in crisis.

As AirlineRatings reported, growth in passenger revenue slowed in 2019 to its lowest levels since 2009.

Virgin Atlantic is a case in point. As The Canary previously reported:

a consortium led by Virgin Atlantic bought Flybe in 2019, promising a large cash injection to save the airline. Branson went into this deal despite the company issuing profit warnings. Was this a wise move, given that Virgin Atlantic has reported losses for two years in a row?

When coronavirus hit, things got worse. The International Air Transport Association (IATA) has said that globally governments may have to inject a whopping $200bn into the industry. This is without the overall fall-out from the pandemic being known.

So it now looks like the UK government may well step in. And its move to bailout an already faltering industry is almost a re-run of the 2008 crash.

After the 2008 financial crisis, the then-Labour government made the public bail out several banks. These included the Royal Bank of Scotland, Northern Rock, and Lloyds. The latter got around £20.3bn of public money to essentially stop it going bust. The government did this by buying shares in the banks. This is a similar plan to the one the Tory government is reportedly proposing for the airlines. But the deal the public did with the banks ended up being a con.

Because the government had to borrow money on our behalf to bailout the banks, we ended up worse off. This is because we paid interest on these loans. The overall loss to the public from all the bailouts was £23bn.

Now, the cost of bailing out the airlines is nowhere near that of the banks. But coupled with the government’s £428bn of other economic measures, the future is already looking dire.

As BBC News reported, the UK government is ploughing hundreds of billions of pounds into the UK economy. It’s doing this to try and stop a financial crash due to the coronavirus crisis. As BBC economics editor Faisal Islam noted, the money is coming from:

the banking system with the help of the Bank of England. …

At a stroke, every single forecast number in the Budget the chancellor gave… are out of date. We are in an entirely new world. A wartime effort, with wartime deficits to cover it.

And it’s the “deficits” part that should worry us all. The government will want to recoup this money at some point. And in the last decade, the Tories ravaged the country with austerity to pay back the deficit we had due to the 2008 bank bailouts. These bailouts were £137bn in total and cost each of us around £1,500 in 2018/19 alone. Yet these figures pale in comparison to the coronavirus ‘bailout’.

So when the pandemic dust settles and the Tories look to recoup the money they’ve bailed us all out with, chances are we can guess where that will be coming from. Because the Tories claimed the last decade of public sector cuts was to get the deficit down. Which, as we now know was a political choice to shrink the state.

So we need to be prepared for austerity ‘mark two’. Because it may well be worse than anything we’ve seen before.