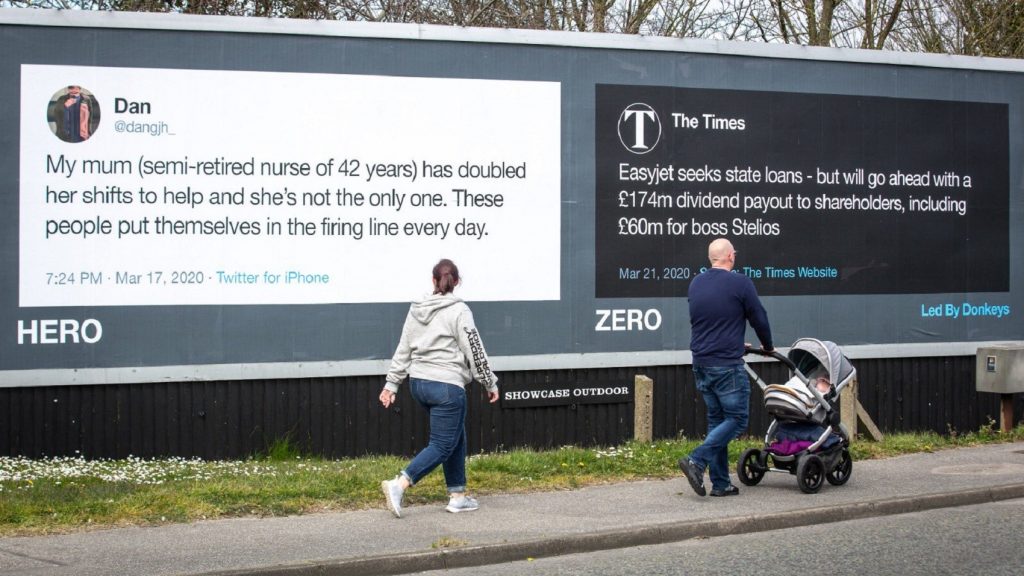 Political campaign group Led By Donkeys is using its platform to praise heroism amid the coronavirus outbreak and to call out those using it as “an opportunity to take”. The group is posting billboards in towns across the UK which compare “heroes” and “zeroes”.

An example in Hereford contrasts a tweet from a care home worker who has just spent eight hours disinfecting her residents’ living space with the news that Richard Branson forced his Virgin workers to take unpaid leave.

“At its heart the Led By Donkeys project has always been about political accountability and holding the powerful to account,” Led By Donkeys co-founder Oliver Knowles told the PA news agency.

“The point we’re making is at times of crisis, millions of people around the world step up and give more of themselves, while clearly others take away.

“We’re trying to praise those people who are doing really heroic stuff because they’re on the frontline or going the extra mile or helping a neighbour… Versus those who already have huge amounts of money and seem to see this as an opportunity to take more… More from the taxpayer, more from their staff – it’s essentially profiteering from the crisis and that’s appalling behaviour that needs calling out.”

A billboard in Christchurch, Dorset, shows two news reports – one on former footballers Gary Neville and Ryan Giggs freely opening their hotels to NHS staff and another on Sports Direct hiking the price of sports equipment by more than 50% in the wake of the pandemic.

“Constructive criticism, even during a time of crisis, is not only valid but it’s important,” Knowles said.

“We want to take great care to not impede the response to the crisis, but it is important that nobody is off-limits.”

Led By Donkeys first went viral in early 2019 by plastering politicians’ past statements onto billboards in an effort to highlight hypocrisy.

Knowles added that the group has been “overwhelmed” by the response to their new billboards, which have been widely shared on social media.

“People have offered really great comments, not just to Led By Donkeys but to the heroes we’re praising as well.”

Knowles said the group is taking care to ensure they are “playing by the rules” when putting up the billboards during the UK lockdown.