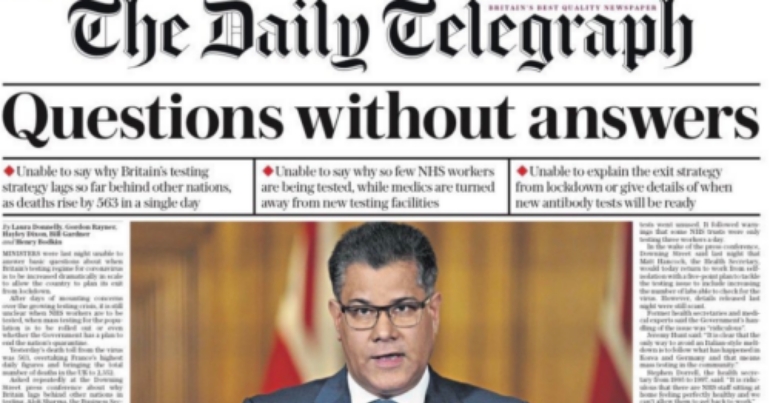 The establishment media is finally turning against Boris Johnson. On 2 April, longstanding friend and former Johnson employer the Telegraph published this scathing front page about his government’s handling of the coronavirus (Covid-19) crisis: 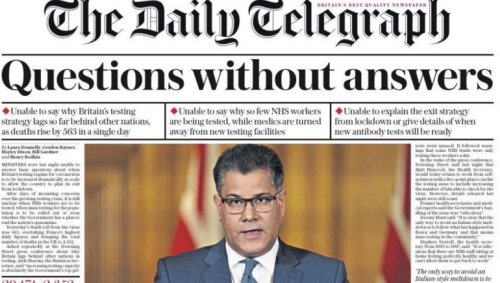 This front page is also reflected in the Daily Mail‘s coverage, with a comment piece entitled:

Testing is the only way to end this purgatory. The Prime Minister MUST now get a grip

And on BBC Newsnight, presenter Emily Maitlis was brutal about the UK’s approach to the pandemic on 1 April:

But in truth we’re still trying to understand what policy the UK is following.

While it’s good to see some robust challenges to government policy finally happening in the media, it’s a long way from the sycophantic election coverage that took place only a few months ago. And there’s one sickening reason why the establishment media has turned on Johnson: self-interest. This pandemic, and the government’s response to it, affects establishment figures. It affects their families and loved ones. And it’s why they’re finally demanding answers from the government that they should have demanded months ago.

As Maitlis and the Telegraph both allude to, UK policy and what the government is actually doing is as clear as mud. First, Johnson downplayed the virus; then there was herd immunity; now, there’s lockdown. The World Health Organisation (WHO) has long been clear that testing is key. And honestly, you don’t need to be an expert to work out that, given the infection rate and the length of time when you can be asymptomatic, testing and contact tracing of those infected is the most logical response.

But NHS staff are still struggling to get tested with only around 2,000 able to access tests up to 1 April. The government has lied time and again. Johnson promised 10,000 tests a day, then stated he was aiming for 25,000. But these tests aren’t materialising. And many people blame the lost months when the government either failed to take action or was promoting herd immunity. One in four NHS staff, meanwhile, are off work and self-isolating. And frontline staff are dying.

The NHS was already in crisis before the pandemic hit. Almost a decade of Conservative-led government cuts left the NHS barely able to cope with a normal winter influenza outbreak, let alone a pandemic. Former health secretary Jeremy Hunt, responsible for many of the brutal cuts the NHS is currently coping with, is now doing media rounds bemoaning the lack of personal protective equipment (PPE). But Hunt is failing to mention his role in previous government advice on PPE, including watering down the list of what should be stockpiled following an “economic assessment”.

Meanwhile, let’s not forget the Tories cheering after they blocked a pay rise for nurses in 2017. And let’s not forget that nursing was already in crisis following cuts to bursaries and an 85% cut in the number of EU nurses wanting to work in the UK since 2016.

These were all things happening before coronavirus – things that can be laid directly at the feet of the Conservative Party. And these were all things the establishment media was happy to ignore to get Johnson elected – something all of us must remember every single time one of these people praises or claps the NHS.

Oh, but now it matters

But suddenly these things matter. And suddenly mainstream journalists care about paltry matters such as Universal Credit being a nightmare or statutory sick pay not being enough to live on. Because now, even if it’s not affecting them, it’s affecting their friends and their families. It doesn’t appear to matter that austerity was linked to 130,000 preventable deaths long before this crisis broke. Equally, it’s the people most impacted by this crisis – vulnerable people, elderly people, and working-class people risking their lives keeping shops and deliveries going – that are still being ignored by the establishment.

On 1 April, the Guardian reported that:

The coronavirus pandemic in Spain is taking a disproportionate toll on the poor, the elderly, the marginalised and those working in low-paid but vital jobs

So far, there’s no evidence to believe that things will be any different in the UK.

While it’s great to see some elements of the media finally standing up to Johnson and his government, it shouldn’t take a pandemic and naked self-interest for this to happen. Because if the mainstream media had looked past their own bank balances and billionaire owners a while ago, we could be facing this pandemic with a better equipped NHS and a government already prioritising people over profit. And this is something we must never forget and we must never forgive.