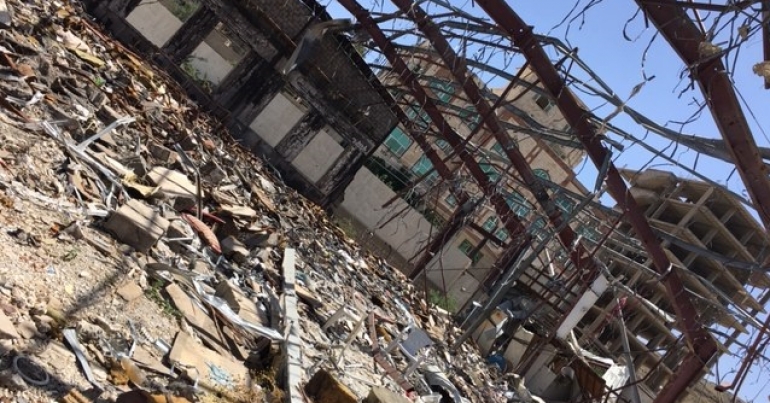 Nasser Arrabyee, a Yemeni journalist based in the country’s capital, Sana’a, has accused the UN of “whitewashing” the crimes of the Saudi-led coalition in his country. While speaking to The Canary, in an exclusive interview, Arrabyee called the recent decision of the UN secretary general António Guterres to remove the coalition from its annual list of child killers a “disaster” and a “big scandal”.

Of course, the UN has been covering up all the time and whitewashing for Saudis all the time. But to do this, in front of the world, is even worse, it’s very bad. It’s telling everyone that okay Saudi Arabia, you can kill all the Yemeni children.

Four children killed the day before the UN report was published

Arrabyee, who owns and manages the site Yemen Now, says that one day before the UN published its report on child killers on 16 June, a Saudi airstrike killed “14 civilians, including four children”. The Saudi’s claim Houthi militants were the targets and have denied killing any civilians.

Guterres’ decision to remove the Saudi-led coalition from the list of those who have committed severe violations against children appears to be based upon the reduction in the number of children explicitly identified by the UN as being killed or injured by the coalition from 729 in 2018 to 222 in 2019. The same UN report also attributed to Houthi forces the killing or injuring of 313 children.

A Yemeni child dies ‘every 12 minutes’ due to the war

But these figures completely ignore a UN-commissioned report which in April 2019 calculated that a child in Yemen dies directly and indirectly from the war and its consequences “every 12 minutes”.

Our new research sheds light onto the impact of conflict in Yemen.

The conflict has set back development in Yemen by 21 years.

One child dies because of the conflict every 12 minutes.

This thread introduces the report findings:

Jonathan Moyer, co-author of the 2019 report and assistant professor at the Joseph Korbel School of International Studies, noted on Twitter that:

Since 2015, the conflict has killed 140,000 children from violence, malnutrition, disease, and reduced family income.

In 2019, a child dies every 12 minutes from conflict (both direct and indirect).

Overall the report estimated that while 102,000 Yemenis will have died directly from the war (e.g. from being shot or bombed), by the end of 2019, even more – 130,000 – will have died due to “lack of access to food, health services, and infrastructure” as a result of the war. The Saudi-UAE coalition, the only party to the conflict with an airforce, and which is armed and assisted by the British, US, and French governments, has bombed schools, hospitals, markets, funerals, weddings, farms and sites that provide drinking water. Arrabyee stressed that while the report was commissioned by the UN, it technically was not conducted by their own personnel.

The country, which was already one of the world’s poorest before the war, has also been under an air, sea, and naval blockade imposed by Saudi Arabia. According to a leaked 2019 French military intelligence report, without the Western assistance the Saudi-initiated war on Yemen could not continue.

Arrabyee: The UN stopped counting the dead years ago

Arrabyee said that, by his own observations and information provided by local groups throughout the country, the number of civilians killed directly from the war is closer to 150,000. Although he acknowledges that his estimate may be wrong, he is open to debate them and said the UN has no teams in the country properly assessing the situation. He slammed what he sees as capitulation to the richer more powerful UN states who are prosecuting the war against his country and described as ‘shameful’ the figure of 10,000 civilians dead which the UN and news media repeated over a number of years.

Arrabye also pointed out that the UN’s removal of the Saudi-led coalition from the “list of shame” is reminiscent of the 2016 decision of then UN secretary general Ban Ki-moon to do the same thing. Moon himself admitted that the threat of losing financial contributions was the motivating factor.

Arrabyee: No progress towards peace only “a lot of destruction” and “killing”

The Canary asked Arrabyee whether there was any reduction in violence or progress in terms of the war.

No. The violence is not reduced at all. Not reduced because the so called ceasefire is the same [as without a ceasefire]. But in terms of progress, no progress since six years ago, the same, there is a stalemate, it’s a deadlock, for six years. I would say Houthies made some progress recently in the Eastern part of [the Yemeni capital Sanaa’a]. That is a big breakthrough for Houthies, a big progress, because [they are] now controlling two provinces, most important provinces, both of them are bordering Saudi Arabia. This is a big thing [for them]. There has been, of course, a lot of destruction, a lot of killings, a lot of you know, a lot of people, civilians, killed and injured and a lot of infrastructure destroyed, yes. But no progress.

He explained the failure of the Saudi-led coalition in succeeding to re-install their preferred ruler this way:

And you can imagine, what progress they can make?

Yemenis “don’t care” about coronavirus – they care about Saudi airstrikes

The level of devastation unleashed onto Yemen by Saudi Arabia, after the government it backed fell in an internal conflict with a Houthi-led alliance, dwarfs any concerns the population may have due to coronavirus (Covid-19), Arrabyee said. While acknowledging the novel coronavirus was “already here” in Yemen, “people don’t care because it’s something that is from the nature”, he explained. Saudi Arabia, on the other hand, is “our neighbour and they are killing people every day. So this is what people care [about]”.

Arrabyee concluded his thoughts saying that the crown prince of Saudi Arabia Mohammed bin Salman wants to extricate himself from what has been a very expensive and ultimately futile endeavour. He added that from Salman’s perspective “it’s a matter of saving face” and on finding a way to leave which will “make defeat look like a victory”.

Meanwhile, the war on Yemen rages on.