The anti-fascists who help protect Seattle's autonomous zone - The Canary 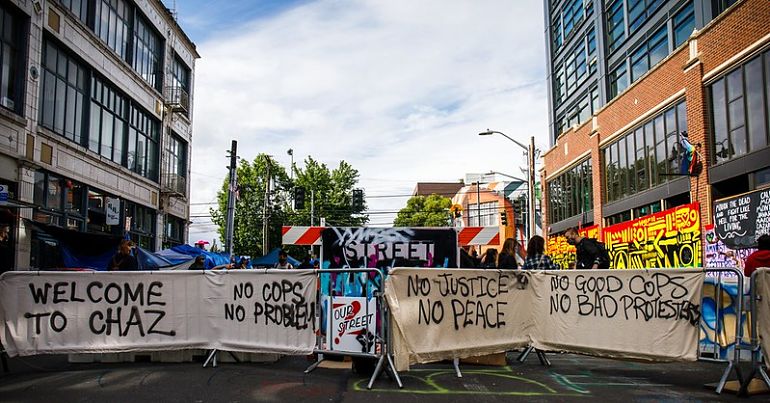 Far-right group the Proud Boys were seen in the vicinity of the Capitol Hill Autonomous Zone (CHAZ) in Seattle. Members of the Puget Sound John Brown Gun Club (JBGC) were reportedly there too.

The Puget Sound JBGC is an armed group that is ideologically on the left. Let’s find out more.

The CHAZ was declared following attacks by police against peaceful protesters. The protesters were demonstrating their support for Black Lives Matter in the wake of the brutal killing by a police officer of Black man George Floyd.

It’s claimed that the far-right Proud Boys were “heard to be” in the Capitol Hill area. So members of the JBGC apparently turned up to act as a deterrent:

Radical Left Governor @JayInslee and the Mayor of Seattle are being taunted and played at a level that our great Country has never seen before. Take back your city NOW. If you don’t do it, I will. This is not a game. These ugly Anarchists must be stopped IMMEDIATELY. MOVE FAST!

But CHAZ survived, despite crude attempts by Fox News to discredit the zone.

So who are the JBGC?

The John Brown Gun Club is named after the abolitionist who led numerous attacks to liberate Black slaves. On 16 October 1859, Brown and his fellow abolitionists decided to take the armoury at Harpers Ferry, West Virginia. After a siege, Brown was captured, sent for trial for treason, and hanged.

The local JBGC chapter that covers the area in and around Seattle is the Puget Sound JBGC, which operates in the Pacific Northwest. Puget Sound JBGC also works with the West Coast Community Defense (WCCD) in Oregon and California.

In their own words

Puget Sound JBGC’s mission, in summary, is to assist:

training and arming people from communities marginalized and oppressed in our society, and offering ourselves in defensive work as invited.

It further adds that:

We believe in active resistance to the corrosive and destructive social effects of white supremacy, sexism, bigotry, and economic exploitation. …

We work to counter the rise of fascist and far-right groups and entities in the Puget Sound (Salish Sea) region. That includes disrupting fascists and their structures to keep them from effectively organizing, and especially resisting fascists holding public events and maintaining a public presence. …

Redneck Revolt is another organisation and has chapters in a number of states – it describes itself as:

a national network of community defense projects from a broad spread of political, religious, and cultural backgrounds. It is a pro-worker, anti-racist organization that focuses on working class liberation from the oppressive systems which dominate our lives. In states where it is legal to practice armed community defense, many branches choose to become John Brown Gun Clubs, training ourselves and our communities in defense and mutual aid.

In a July 2019 article by Kim Kelly in Vox, the author explains that during a 2017 protest against the far-right Unite the Rally in Charlottesville:

the only time I truly felt safe was when members of Redneck Revolt — a working-class, anti-fascist, anti-racist armed community defense group — showed up open-carrying and secured the park where a number of us were gathered. The police may have stood by and done nothing as a neo-Nazi murdered one of us, but Redneck Revolt was there to offer protection — and the fascists steered clear of that park because of it.

Kelly added how Redneck Revolt is part of a long tradition of defence for marginalised communities:

As the black militant liberation group the Black Panthers showed back in the 1960s, as the Zapatistas showed in the ’90s, and as anarchists in New Orleans showed during the aftermath of Katrina, when cops and other fascists see that they’re not the only ones packing, the balance of power shifts, and they tend to reconsider their tactics.

Puget Sound JBGC was affiliated with Redneck Revolt (RR). However, following claims of sexual assault involving a former member of the Arizona chapter of RR, Puget Sound JBGC made it clear it was highly critical of the way RR had handled the matter and consequently it and other chapters have de-affiliated.

There are many examples globally of armed resistance against authoritarian rule and fascism. These include not just the Zapatistas revolution of Chiapas (Mexico), but also the resistance by the YPG and YPJ of Rojava (who helped defeat Daesh in Syria); the anarcho-syndicalist and anarchist CNT/FAI war against fascism in 1930s Spain; and the anarchist resistance in Italy during World War II and in Spain afterwards.

The US struggle is very different from those struggles. In America its a fact that many far-right groups are armed and the same, of course, for police – so defensive measures take on a different meaning. In contrast, in the UK most anti-fascists regard the carrying of guns or approval of those who carry guns as anathema. Groups like the JBGC hold arms not to attack, but to protect people and act as a deterrent to right-wing groups who may also carry guns.

Ultimately, it could be argued that real power lies with ordinary people uniting through mutual aid. Achieving that is the real challenge we all face.