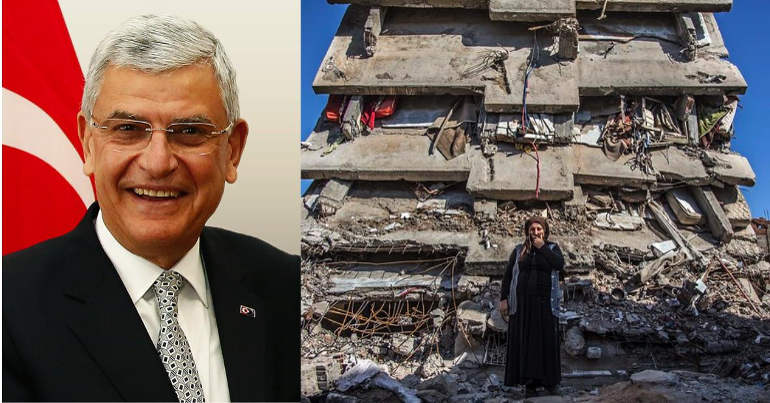 A politician for Turkey’s fascistic Justice and Development Party (AKP) has been elected as the new head of the UN General Assembly. Greece, Cyprus, and Armenia – all countries with experience of Turkey’s murderous policies – tried to block the nomination.

Volkan Bozkır has been an MP for Istanbul and head of Turkey’s Foreign Affairs. He was hand-picked by dictatorial Turkish president Tayyip Erdoğan in the country’s bid for the presidency. This is the first time that Turkey will hold the position.

Greece, Cyprus, and Armenia argued that:

Turkey threatens the peace and security of the entire region in order to achieve the leading role in the region by periodically violating the UN Charter and international law, including UN penalties.

Turkey has been imposing a strangling blockade on Armenia for more than thirty years.

The Turkish government – and president Erdoğan – have consistently denied the Armenian genocide and Ottoman Turkey’s murder of 1.5 million people. It comes as no surprise that Volkan Bozkır is also an Armenian genocide denier. So it’s outrageous that Bozkır was allowed the top UN role with barely any objection.

In 2015, Pope Francis stated that the Ottoman Turkish murder of Armenians was genocide. Bozkır replied:

This statement is extremely controversial and it is not based on any historical documents… Turkey will not accept this statement and considers it as null and void.

In May 2020, Bozkır stressed that one of the UN’s top priorities would be women’s rights:

Another cross-cutting priority is to improve the living standards and rights of women. Women’s full and equal participation in all spheres of life, by strengthening their status within society, is an absolute must in all our endeavours.

This statement would be laughable if it wasn’t so tragic. Turkey’s AKP government consistently targets women’s organisations and imprisons women activists and journalists. In January, the Turkish state even passed a so-called “marry-your-rapist” bill, meaning that men who rape women under 18 can avoid punishment by marrying their victims.

When he was elected, Bozkır tweeted that he will “guide the efforts to contribute to international peace”:

1) I am thankful to all UN member states, for electing me with an overwhelming majority,as the President of the 75th UN General Assembly. As we mark the 75th anniversary of the UN, I will guide the efforts to contribute to international peace, in the challenging times we live in. pic.twitter.com/0cJGzgIw4E

This ridiculous statement was liked and retweeted by thousands. But no one can really be under the illusion that Bozkır and the Turkish government care about peace. In the last four years alone, Turkey has invaded north-east Syria and is alleged to have used chemical weapons on civilians. It has invaded and occupied Afrin, launched a major drone attack on Idlib, and murdered its own civilians. It continues its war in Libya, while repeatedly bombing Iraqi Kurdistan.

It was Bozkır who corresponded with the US when Turkey began its 2019 attack on Rojava, northern Syria. “The objective of this operation is to ensure our border security [and] neutralise terrorists in the region”, he said. The Canary has reported on how Turkey is attempting to ethnically cleanse the region.

On top of all this, Turkey continues to scramble for oil and gas in the Mediterranean, while provoking Greece. In a bid to claim offshore energy reserves, president Erdoğan threatened:

You [Greece] had better collect yourself and know your place. If you don’t know your limits, then what Turkey would do is obvious.

How much power does Bozkır really have?

By awarding an AKP politician this role, the world’s most powerful states are showing that they have no intention of reeling Turkey in, or intervening in Turkey’s continuing military aggression and ethnic cleansing.