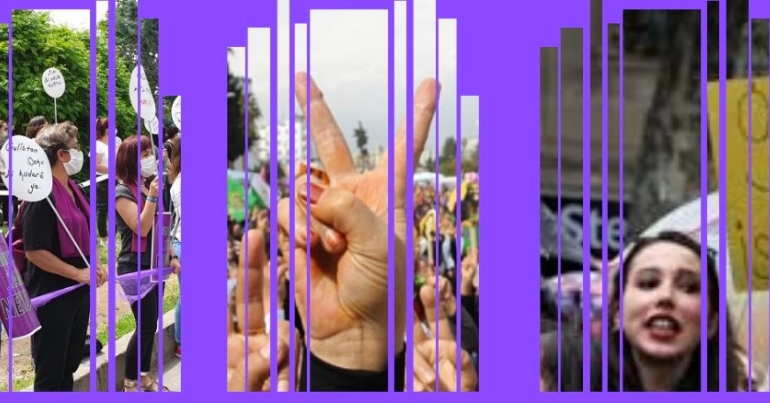 A new wave of repression against women in Bakur (the majority-Kurdish area of NATO member Turkey) took place on 22 May.

Now, more than ever, we need to act in solidarity with women in Bakur. And in the words of a good friend there, “let’s grow women’s solidarity together”.

Why did the arrests take place?

According to a document seen by The Canary, lawyers involved in the case questioned the women’s involvement in a range of activities from supporting hunger strikes in 2019, to involvement in a rally for International Women’s Day on 8 March (pictured in the image above).

Prosecutors in the case are also claiming that certain slogans are illegal, such as “Jin jiyan azadi” (Women, Life, Freedom), “don’t interfere with our free will”, “no to isolation”, and – quite spectacularly – “women want peace”.

But there is another disturbing element to the case. On 5 January, 21-year-old Gülistan Doku went missing in Dersim. And women across Turkey have been putting pressure on the government to find out what happened to her.

In February, The Canary visited Jin News, a media organisation run entirely by women. The women we interviewed highlighted the case as the sort of story they investigate because they aim “to reveal things that the government wants to hide”. This is risky work in Turkey. They told us that 14 “free press” women were in prison, nine from their organisation. According to Reporters Without Borders, Turkey is “the world’s biggest jailer of media professionals“.

Doku had been missing for 27 days when we talked to Jin News. Jin News had been to Dersim to interview Doku’s family and friends. The women said that “the government doesn’t do anything” and set out some crucial facts in the case:

And it seems the police aren’t happy with women investigating and asking questions about Doku’s disappearance. Because interrogators questioned the women about their campaigning around the slogan “Where is Gulistan Doku?”.

The police raids and arrests were a clear attack on women’s organisations in Bakur. In a statement, the TJA said the attacks:

show that the AKP-MHP government is intent on continuing as a misogynist, militaristic, racist, and sexist government

Being a woman, being Kurdish, living in Kurdish geography results in a threefold increase in oppression.

And it claimed it was targeted because:

it opposes… the draft law to pardon child marriages and to pardon rapists which agree to marry the child. If children are seen eligible to marry on their own solid will why is the right to universal suffrage granted at 18? Putting children in the position of giving childbirth is in fact the atrocity of this century.

Under the increasingly dictatorial and fascistic government of Recep Tayyip Erdoğan, women’s rights are being eroded at a national level. In January, a so-called “marry-your-rapist” bill was introduced, meaning men who rape women can avoid punishment by marrying their victims.

The Canary was also invited to a women’s conference in February, organised by the TJA under the banner of:

We ARE women; we ARE here; we LIVE for our freedom; we have RISEN for change.

Representatives from the organisations targeted were present at the conference, as well as some of the women who were detained. A representative from the Rosa Women’s Association spoke. She explained that the organisation had been set up around a year and a half ago to “work on ending violence against women”, including offering abused women psychological support and helping them finding shelters.

Violence against women is a huge problem in Turkey. She explained that:

many women subject to violence were married at a young age and subjected to rape.

Every day there are women ‘suicides’ but we know that they’re not actually suicides.

She also set out another case that the group was involved with:

In Mardin, we had a case where a kayyum [a ‘trustee’ put in place by the ruling AKP party to replace an elected mayor] appointed… was selling women to other men. We informed organisations and now there is a court case opened against him. We’re following this court case.

The association was also involved in Doku’s case and issued a statement and a press release from Dersim about it.

The Saturday Peace Mothers were also present at the conference and we visited them separately during our time in Amed. They are a group of women who meet every week to remember and demand answers about their children, who were ‘disappeared’ by the Turkish state. They hold pictures of their missing children and have traditionally gathered in the street to hold vigils.

Repression from the Turkish state means that these women are no longer able to meet on the street. Their gatherings have been banned by the Turkish authorities. In August 2018, police arrested 47 people, fired tear gas, and used water cannons against the mothers in Istanbul. Some of those attacked were in their 80s.

As one person there told me during a trip to Amed in 2019, “it is too dangerous to meet on the streets”.

The mothers we met in February told us about their struggle to escape male domination. One mother from Istanbul told the conference her story:

I was always at home, washing dishes. But with this movement, I realised who I am…There are still mothers who can not leave their homes. We need to go to them and say ‘let’s go out together’. If a woman knows that she can go out, she’ll go to demonstrations and the government will be scared of all the women on the streets. It will be very powerful.

Although every mother has a tragic story of lost, disappeared, or imprisoned children, their vitality and resistance shines through. As another mother from Hakkari stated:

We don’t have anything to be afraid of. Our children are imprisoned or have been killed. The state has already done everything to us.

This new wave of repression follows a continuous pattern for Kurdish citizens across Bakur. During the local elections in 2019, the left-wing HDP (Peoples’ Democratic Party) won back municipalities seized by Erdoğan after Turkey’s 2016 coup attempt. He had replaced 100 mayors with AKP kayyums (‘trustees’). The Canary was told 94 of these mayors were from the HDP. A large number of elected mayors, including all those from the big Kurdish cities, were imprisoned.

Despite hope from the newly elected mayors that history wouldn’t repeat itself, the operation against Kurdish mayors began just five days after the election. Since then, in total,  Erdoğan has replaced mayors in 45 out of the 65 municipalities that the HDP won. There are now 21 mayors in prison.

But this new wave of repression, targeted at women and their organisations, is particularly sinister in a climate of increased violence and oppression against women.

Women in Bakur are not only fighting for their autonomy against a backdrop of repression, they are providing an example for women everywhere. The Kurdish women’s movement is at the forefront of the women’s struggle worldwide. Lipservice isn’t just paid to women’s equality in the Kurdish freedom movement; equality isn’t something that can be sorted after other struggles are won – it’s a central foundation that is visible in every aspect of organising. And it shows. Not just with the women at the conference we attended but in the movement’s political structures. For example, the HDP has female and male ‘co-chairs’ to ensure there’s equal representation for women across the party.

But these women need our solidarity. The Turkish state is afraid of the power of these women. And they need to know their struggle is not being ignored and that we are making a noise about their repression. Whether it’s joining the campaign to Boycott Turkey, educating people about the Kurdish women’s movement and the Kurdish freedom movement generally, writing to politicians, or targeting the arms trade, there is something every one of us can do to ensure Turkey can’t get away with repressing women fighting for equal rights.

As one of the Peace Mothers in Amed told us in February:

We need to awaken the public about the Kurdish struggle… We can organise all over the Earth. Women especially should resist more.

Speaking about the current repression in Amed, my friend said:

Our women’s struggle cannot be tried.

She is right. And it’s through our collective and international solidarity that we can raise our voices together, speak out, and make sure that one of the most vibrant and progressive women’s movements in the world isn’t silenced.

Featured image via TJA with permission