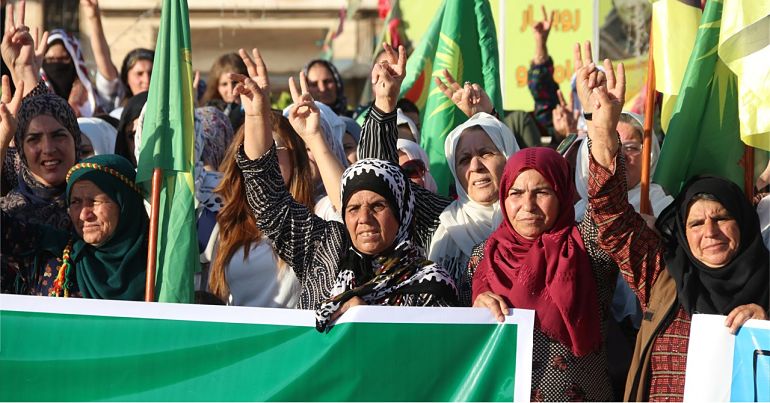 The Yezidi (Yazidi) people have faced over 70 genocides and mass killings throughout their history. Most recently, they were left undefended when Daesh (ISIS/ISIL) swept through Iraq, killing, raping, and enslaving thousands of the long-oppressed minority in what the United Nations described as a genocide.

Daesh was driven out of the Yezidis’ mountainous homeland of Shengal (also known as Sinjar). But the Yezidis now face fresh attacks – from a NATO partner.

Turkey this week launched an unprecedented wave of airstrikes, with around 20 jets striking the Yezidi homeland scores of times and sparking fears of further atrocities against the Yezidi people.

The results of a Turkey’s bombardment. Civil houses destroyed of Yezidi in Shengal, while claiming militair targets. #Kurdistan #Yezidi pic.twitter.com/IkI1VldwGk

A history of genocide

Frank Mei is a researcher with the Rojava Information Center who has just completed a paper about religious minorities in the region.

He tells The Canary:

The Kurdish-speaking minority who practice the syncretic Yazidi religion have often been slandered as devil-worshippers, facing repeated pogroms and mass killings.

Prior to the 2014 genocide, there were about half a million Yazidis living in Iraq. But Iraqi Kurdish ‘Peshmerga’ forces were ordered to withdraw before ISIS’ advance, leaving the Yazidis defenceless.

55,000 Yazidis fled into the nearby Sinjar Mountains. They faced extermination at ISIS’ hands until Syrian YPG units and PKK fighters stationed in these mountains together opened a humanitarian corridor to Rojava.

Before withdrawing from Shengal in 2018, the Kurdistan Workers’ Party (PKK) helped train new all-Yezidi military forces, the Shengal Resistance Units (YBŞ), and all-female Shengal Women’s Units (YJŞ). Hundreds of thousands of Yezidis have fled, but others are returning to organise themselves autonomously as Yezidi people.

Yezidi units crossed into North and East Syria to participate in the campaign against Daesh, and they now focus on protecting their homeland from external threats. Yezidi civil society activists have also been re-organizing their community, establishing communes, democratic assemblies, and autonomous women’s organisations.

Saoud Digire is a Yezidi woman who was enslaved by Daesh but joined YJŞ when she was liberated. She told Rojava Information Center:

Like Nadia Murad, she was kidnapped, enslaved & abused by ISIS.

But after her liberation, she joined the Shengal Women's Units, and fought against ISIS in Raqqa, "taking revenge for all Yazidi women".

She shares her story here: pic.twitter.com/lw3zP2ZxQH

In the years since the genocide, Turkey has launched repeated airstrikes against Shengal, often targeting areas home to vulnerable Yezidis and Internally Displaced Persons (IDPs). Some of the latest round of airstrikes fell near hospitals and IDP camps, Simon Klamper – a foreign volunteer with the YBŞ media centre – tells The Canary:

The Turkish army hit our positions with airstrikes, for example in Serdeşt, where there is a refugee camp and three hospitals. Four people were injured.

Footage which shows #Turkish jets that are actively bombing near civilian locations in #Şengal. pic.twitter.com/DHrAethtTX

The airstrikes came on the same day as hundreds of Yezidi IDPs who have been displaced since the 2014 Daesh genocide moved back to their homeland for the first time, prompting an outcry from human rights organisations including the US Commission on Religious Freedom.

Nobel Peace Prize winner Nadia Murad, herself a survivor of the 2014 genocide, said:

Yezidis were abandoned to face genocide, systematic sexual slavery & six years of forced displacement. The international community has again abdicated its moral responsibility to facilitate a safe and dignified return for Yezidi genocide survivors to their homeland.

Mount Sinjar is a war zone right now. Turkish fighter jets are bombing multiple locations. Over 150 Yazidi families had just returned to their homes. When will @IraqiGovt & the international community apply some courage & political will to resolving security challenges in Sinjar?

To reach Shengal, Turkish jets travel over 200km through airspace controlled both by the Iraqi Federal Government and the Kurdistan Regional Government (KRG), the semi-autonomous region primarily controlled by the Kurdish-nationalist KDP party.

KDP has a track record of oppressing and discriminating against the Yezidi minority, in contrast to neighbouring North and East Syria, where Yezidis, Kurds, Arabs, and Christians live together in a pluralistic system known as ‘democratic confederalism’.

Zinar Cafer is a Yezidi journalist based in North and East Syria. He tells The Canary:

Turkey could not have passed into Shengal’s airspace without consent from Iraq and the KDP. Only afterward does [the Iraqi government] issue a statement condemning the attacks. This is a joke. In reality, they did nothing to prevent these attacks.

These attacks could mark the opening of what Turkey is calling Operation Claw Eagle, and what Cafer fears could become the “74th genocide” against the Yezidi people.

Turkish warplanes also targeted a Kurdish refugee camp in Iraq and PKK positions in the Qandil Mountains. Moreover, 5,000 Turkish soldiers have gathered in Silopi near the Syrian and Iraqi border, raising the spectre of a ground invasion, a source in the city tells The Canary.

Turkish intelligence chief Hakan Fidan recently paid a secret visit to Baghdad, while the KDP has been allowing Turkey to build up troops and military bases in the KRG for years.

A Turkish ground invasion would spell disaster for the Yezidi people struggling for safety, democracy, and self-determination in Shengal. Cafer says: