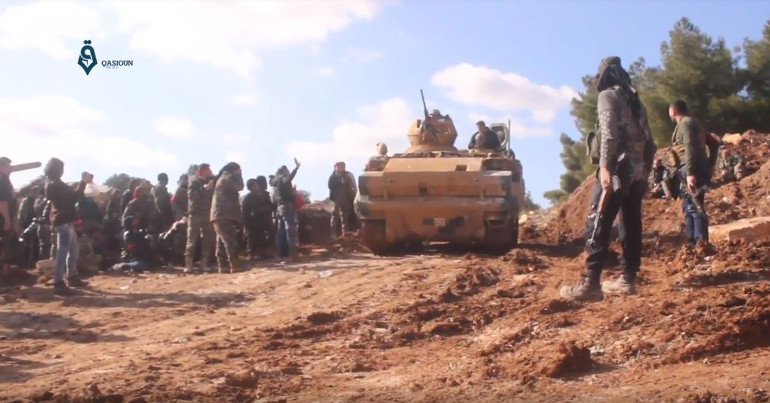 An internationalist volunteer has spoken to The Canary about joining the armed resistance against the Turkish invasion of Afrin in northern Syria last year.

In 2012, a revolution began in the majority-Kurdish region of Rojava in northern Syria. People organised themselves into communes, declared autonomy, and began practising stateless direct democracy. The revolution, however, was under threat from the very beginning and has faced invasion by Daesh (Isis/Isil) and Turkey. Hundreds of women and men from around the world have volunteered to join local people in defending the revolution.

Originally from the US, Argeş travelled to Rojava in 2016 to join the Kurdish-led People’s Protection Units (YPG) in a fight against Daesh in Raqqa. He joined Rojava’s social revolution after the liberation of Raqqa.

Argeş volunteered to fight again in January 2018 to help defend the revolution against Turkish invasion in Afrin. This is the second part of his eyewitness account. In part one Argeş described the war crimes that were carried out by the Turkish military and its proxies. In this interview, he describes the weaponry that was used in the attack and the complicity of Western states and the companies that supplied it.

What were the weapons that Turkey and its proxies were using? And where were did they come from?

The proxies had NATO weapons. The majority were small arms. G3 [rifles], which are produced in Germany. They had M16s which are American, and of course, Kalashnikovs. For sure these were all [supplied to them] by Turkey.

The majority of casualties were coming from Turkish air strikes and drones, and then artillery, in that order.

F16s were conducting the air strikes and then three types of drones. Two were unarmed surveillance drones… [including the] Turkish Aerospace Industries Baykus, and then there was one armed drone called the Bayraktar which is produced in Turkey [by Baykar Makina]… The Bayaktar fires rockets: the Roketsan MAM-L smart micro-munition.

Did you personally witness the drones being used?

Yes, I have seen all different drones being used… The Turkish strategy was heavily reliant on drones, and the drones would either directly strike you or coordinate the targets to artillery. The artillery… [which is] like a Howitzer, is on a tank called the T155 Firtina – that has a range of 40km. They can hit really accurately using the drone coordinates, and the ammunition for that is actually produced in Turkey and it’s very cheap for them to fire, so they would just be continuously firing artillery into our positions. The drones were pretty much in the air 24/7.

They had access to so much NATO weaponry that there were some Israeli and American drone designs that were probably used by them too, but I don’t know exactly which ones.

Did you also witness a Turkish Aerospace Industries drone in use?

Yes, the TAI Baykus was most commonly used because the Bayraktar is expensive to fire. So what they would do is have those unarmed drones up in the air all the time… [to use] for targeting.

They would use a strategy with the drones called ‘Rabbits Out’. ‘Rabbits Out’ is where they expect the target to be in a certain area. So what they will do is put an unarmed, or sometimes armed, drone above there and they’ll just start firing artillery into the area – sometimes supporting it with air strikes – to make us move… It was a psychological strategy so that we would lose our nerve and move, and once we did they could directly target us and hit us.

Were they using the drones to target F16 strikes as well?

Yes. Typically the drone would be flying above. If you were sighted it would make this movement like a spiral and then within five to ten minutes it would be followed by an F16.

Were Cobra Helicopters used in the attack?

Yes, they used that pretty frequently. The Super Cobra Bell AH1 J [manufactured by Bell Helicopter in the US].

Can you talk about how these weapons are being used?

Do you think the international companies and states providing the weaponry are complicit in what’s going on?

The US is still giving them weapons. And look at Germany. They [supplied] Leopard tanks to Turkey.

There is a call, not only from Rojava but from a number of groups around the world, for the different international actors to stop arming Turkey. Because now it’s abundantly clear what these weapons are being used for.

The companies should be held accountable because all that blood is on their hands.

Tom is part of Shoal Collective: a cooperative producing writing for social justice and a world beyond capitalism. Twitter: @ShoalCollective