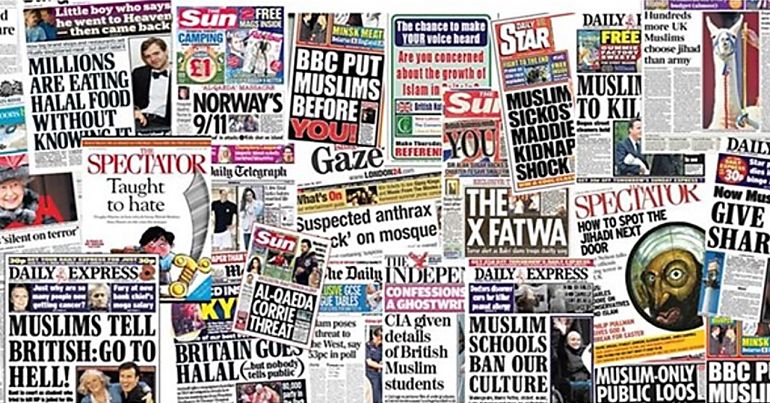 On 18 March, the UK’s security minister made a terrifying claim on BBC Radio 4‘s Today show. As the world mourns for victims of the Mosque massacres in New Zealand, Ben Wallace defended our “mainstream media”. The same media that’s led a relentless attack on Muslim people for years.

Are you saying that there really is an exact parallel between the radicalisation that we have seen in people’s bedrooms as they watch horror videos that leads to acts of Islamist terrorism… between that and this far right terrorism?

There is certainly very similar characteristics, which is: people’s ignorance and intolerance is going unchallenged. And… that’s partly because they can hide away from it. And it’s why I believe that one of the most important things in Britain’s society, and why I… have some optimism for the future is we have a strong mainstream media that does challenge people’s perceptions; that does challenge people’s views.

Wallace also defended the government’s controversial Prevent programme and said our “strong mainstream media” was a “rock in the storm”. When Robinson asked about measures to “recognise and confront Islamophobia” in the Conservative Party, Wallace did acknowledge that Islamophobia exists “up and down the country”. But he failed to answer Robinson’s question directly. There are growing concerns that the Conservatives have not dealt with complaints about racism in the Party.

Clearly, Wallace isn’t aware of the appalling coverage of this latest atrocity from many establishment media outlets. He also seemed to miss the BBC giving a platform to a known far-right group the day after the killings. And certainly, he failed entirely to acknowledge the extent of negative media reports about Muslim people.

Miqdaad Versi, a spokesperson for the UK Muslim Council, took time to explain fully the role played by the mass media:

Some people doubt the scale of Islamophobia in the media, claim it is limited to certain views of Katie Hopkins, Rod Liddle and Melanie Phillips, and believe the far-right attitudes come from extreme rather than mainstream sources. This thread aims to challenge such assumptions.

As Versi pointed out, an academic study showed that establishment media reports contribute “to an atmosphere of rising hostility towards Muslims in Britain”.

Many will recall Hopkins' "final solution" tweet after the Manchester bombings, but here is an establishment journalist Trevor Kavanagh (he was on the Board of the press regulator IPSO) using Nazi-like language about Muslims ("The Muslim Problem")https://t.co/05FkspHBWC

Versi meticulously listed 26 examples of Islamophobic reporting by “mainstream” outlets. He also pointed out that even when those outlets are forced to apologise for “serious inaccuracies”, it’s too late. Because known far-right cheerleaders share these articles:

And that article was shared by Paul Watson to his 935k followershttps://t.co/MYMipqFdWA

Versi was accurate and clear when he said that the media fuels Islamophobia:

When asked where do people get their conspiratorial views about Muslims from, the answer is clear – sections of the media.

And the alt-right and far-right use these "mainstream" papers to support their narrative – a narrative that has devastating consequences. /END

Many other people agreed:

This is what the mainstream media has been doing for years and getting away with it, so someone tell Ben Wallace to wake the fuck up #Christchurch pic.twitter.com/06d9t0uPSU

Tory Ben Wallace on @BBCRadio4 this morning said the rise of extremism would be resisted by maintaining a ‘strong mainstream media’. I wish I had his faith when MSM platforms extreme views like Farage, Hopkins. Not to mention The Daily Mail’s fascist piddle for the last 100 years

And Wallace also failed to acknowledge that, as The Canary reported, Conservative MPs continue to make Islamophobic comments. Yet calls led by Tory peer Sayeeda Warsi to investigate fully the “overwhelming evidence of Islamophobia” in the party are ignored.

So, yet again, the BBC allowed a Conservative MP to make inaccurate and misleading claims about the extent of Islamophobia and the crucial reasons it spreads, live on air. As the Christchurch massacre showed, this has to stop. Because the consequences if it doesn’t are deadly.