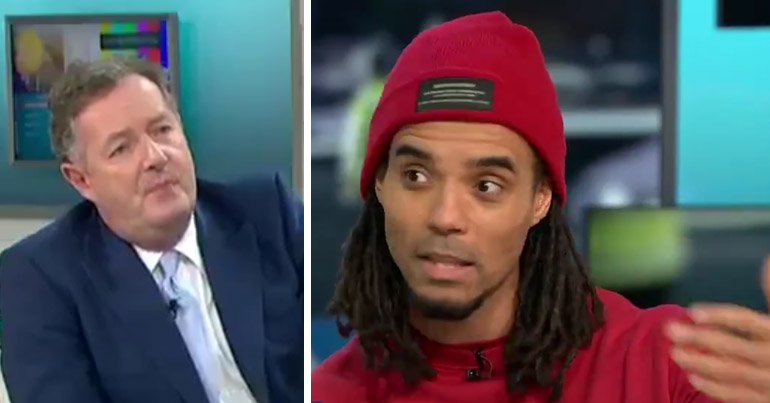 Rapper and activist Akala went on Good Morning Britain (GMB) to explain the pitfalls of racialising knife crime. The public were left speechless by his insight. And even Piers Morgan stopped ranting to listen.

We don’t discuss the real problems with knife violence

On 18 March, Akala was a guest on GMB as the show discussed knife crime. Morgan suggested to Akala that there’s a link between young Black males and knife crime. But Akala disagreed.

He pointed out that some of the most horrific examples of knife attacks have been by white people on white people. In these cases the rapper said “race suddenly becomes unimportant”:

‘Black-on-black violence is used to give the public the ridiculous impression all black people are at an equal risk of [committing] violent crime.’@akalamusic explains why making knife crime a race issue is counterproductive. pic.twitter.com/E9pFrTBdcw

But Akala agreed that a very specific group of young Black males are involved with such violence. It’s those that are:

at a very particular stage in their lives, filled with a degree of psychological self-hatred or contempt for themselves that they project onto people which remind them of themselves

When Morgan pushed Akala on whether race is “relevant”, Akala said that:

there is an internalised racism… But we never use it in that way because that would mean a wider dialogue about contempt for Black life in general.

“Glued to the TV”

The public loved Akala’s appearance on the morning chat show. Many welcomed his wisdom and insight:

Huge Respect to @akalamusic for his fulsome exploration of the knife crime situation in the UK, both past and present. He was well researched and provided facts that 98% of us do not know. If you missed the interview, do catch up. Thank you @gmb @piersmorgan and @susannareid100

@akalamusic is blessed with a wealth of knowledge and knowledge is power!! Stay blessed 🙏🏽

I LOVE Akala. This is bitesize education for the entire country. #GMB

Others talked of how engaging he was:

What an inspiring young man, I was glued to the tv listening to him. Well done all @GMB 👍👍👍

Meanwhile, some noticed that even Morgan – known for his tirades – took time to listen:

@akalamusic on @GMB take a bow, fantastic discussion that, it really was. Would also like to applaud @piersmorgan for the way he conducted himself, usually gets a lot of stick but he let Akala talk and highlighted key issues. Fantastic.

On the other hand, it seemed not everyone listened closely:

I don’t think it is racist to state the fact that most stabbings have a black stabber in London. This is not racist. This is a fact due to culture.

The morning’s discussion came after Nathaniel Armstrong was stabbed to death in London on 16 March. Armstrong was cousin to Alex Beresford, GMB’s weatherman who interrupted a GMB debate on 5 March to argue that changing social environment was crucial to tackling knife crime. Beresford praised Akala on Twitter for putting Armstrong’s murder “into an understandable perspective”.

A topic like knife crime is complex and can’t be explained away by pointing at a single source. While the mass media loves blaming drill music and politicians point to a lack of police funding, Akala shows the problem runs much deeper. And his GMB appearance builds on what Akala told Channel 4 News. On 4 March, he hit out at the “moral panic” over knife crime figures and described the “racial explanations” as a “way out”.

Internalised racism is part of the problem that the UK still has with ethnicity. And the popular focus on ‘cultural’ causes such as music displays just how unwilling many are to confront that problem. But the public response to Akala shows that some people are crying out for insight on the issue. And in giving his thoughts, Akala was even able to shut Morgan up.