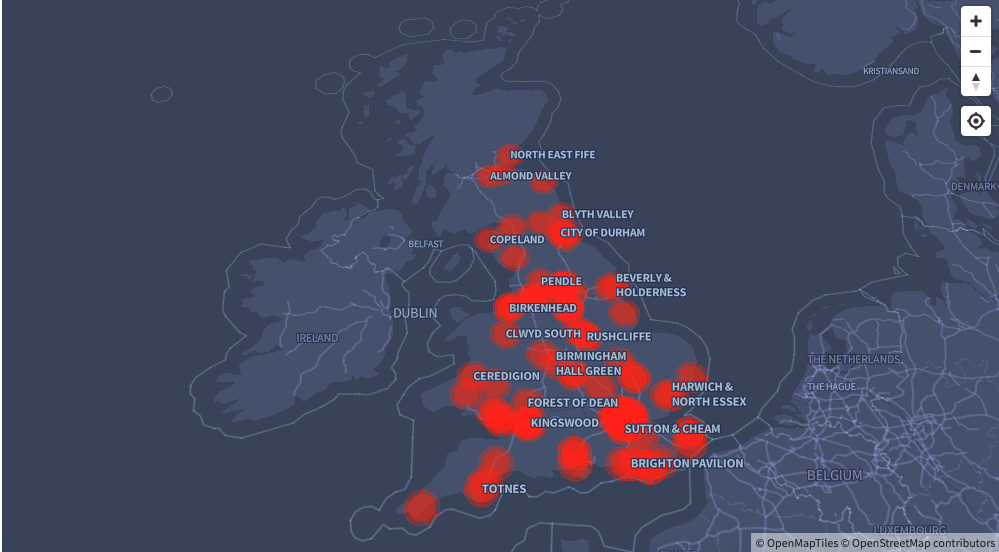 Regions of the UK continue to turn red as local Labour groups continue to challenge Keir Starmer’s leadership. How do we know? We’ve been tracking it.

As part of our #FactOfTheMatter series, The Canary has been tracking these rebellious hotspots to launch its first interactive investigation: and the findings show a clear rebellion beginning to form across the country.

Shut down, dismissed, and suspended

The rebellion follows the Labour leadership’s attempts to stop motions relating to Jeremy Corbyn’s suspension or criticism of its political decisions following the Equality and Human Rights Commission (EHRC) report.

While the EHRC found that “there were unlawful acts of harassment and discrimination for which the Labour Party is responsible”, as The Canary reported, there were several issues with the report. Not least in how it defined antisemitism.

However, since the EHRC report was published, Jewish Labour Party members have come forwards to accuse Labour of ‘weaponising fears’.

A member of Jewish Voice for Labour, a left-wing group of Jewish Labour members, called the ban “grossly insulting”:

The latest edict from party HQ, suggesting that Jewish members require a wholesale ban on discussion of anything that touches on the treatment of Jeremy Corbyn in order to feel safe and welcome in the party, is grossly insulting and inflammatory.

Using such a justification to invoke the delegated powers of the General Secretary to act against members who stand up for their right to free expression seems calculated to provoke revolt within the branches and CLPs, once again weaponising the fears and concerns of Jewish people to further Keir Starmer’s campaign against supporters of his predecessor as leader.

The Canary began investigating following reports of CLP members across the country claiming that their branch had been blocked from discussing motions relating to the solidarity or reinstatement of Corbyn, let alone being able to pass them.

The investigations team has worked diligently to verify the 92 CLPs that reportedly challenged the leadership. We found that CLPs in England, Scotland, and Wales rebelled by passing votes of no confidence, raising motions in solidarity with or to reinstate Jeremy Corbyn, and in one case, overthrowing a meeting entirely.

CLPs where motions were blocked:

“Motions of solidarity will be ruled out of order”

With growing uncertainty about what motions would be blocked, chair of Brighton Pavilion Constituency Jon Rogers wrote to general secretary David Evans in November to express his concerns.

It remains the case that motions which seek to repudiate the findings of the EHRC or question its competency to conduct the investigation remain not competent business for branches or CLPs. Motions relating to ongoing disciplinary cases are also not in order, in line with the instructions of my predecessor.

I am aware that other motions (including expressions of solidarity, and matters relating to the internal processes of the PLP) are providing a flashpoint for the expression of views that undermine the Labour Party’s ability to provide a safe and welcoming space for all members, in particular our Jewish members. Therefore, all motions which touch on these issues will also be ruled out of order.

While, rightly, organisations should go above and beyond to safeguard its members, Rogers’ response echoes the concerns from Jewish Voice for Labour.

Your guidance to me, as a CLP Chair is therefore that I should rule out of order all motions which include expressions of solidarity and all motions which relate – in any way – to the internal processes of the PLP. Among the motions, submitted by Party branches, which are before our GC at present and which, according to your guidance, it appears to me I should rule out of order are the following;

If I were to follow your guidance I should rule all of these motions out of order.

Our investigations team is currently aware of seven cases in which CLP branch chairs, secretaries, or co-secretaries have resigned as a direct result of motions being blocked within the party.

These include councillor Tony Norbury, who represents Prenton on Wirral Council, and secretary of Liverpool Walton Alan Gibbons.

Norbury was suspended for voting in favour of three motions related to Jeremy Corbyn and the EHRC report. He is now sitting as an independent representative, like Jeremy Corbyn, while an investigation into his conduct takes place.

Labour candidate for Warbreck Moor and secretary of Liverpool Walton Alan Gibbons has also been suspended pending an investigation.

A Liverpool Walton CLP member told The Canary that the former secretary had not been told why he was being suspended:

He (Alan Gibbons) was notified about his suspension over email but wasn’t told why. Which from my understanding is similar to other cases we’re starting to see up and down the country.

A call against political censorship

As a result, of growing concerns within the party, the following CLPs recently passed a motion for freedom of expression and against political censorship:

The CLPs challenging democracy in your area

However, these are just a handful of the 92 CLPs challenging Labour’s leadership.

To find out more information about the rebellion in your area, follow our map.

Guidance has been withdrawn

In addition to motions being blocked, and members suspended, guidance has been withdrawn from the following constituencies:

(To access the full list of CLPs click here. Please note that this map is being regularly updated and is being managed by our investigations team.)

The meeting was overthrown

While some areas are seeing a stripping back of formal guidance issued to their CLP, others are stepping aside to let members pass motions without being blocked.

This was the case in November, when members of a CLP took their rebellion a step further by “overthrowing the meeting entirely”.

Members of Hastings & Rye attended a CLP meeting in which the chair and secretary ‘left’ in order for the CLP to discuss motions relating to Jeremy Corbyn.

A member told The Canary:

Hastings and Rye passed a motion of no-confidence in the leader and general secretary of the LP – by the rather nifty means of having their chair and seccy stand down so the CLP as a whole could take over the meeting. Innocent of any letters the chair and secretary may have received.

Another member went on to explain that the branch execs left in order for the CLP to pass the motion:

The meeting went as usual, and then towards the end, the chair and secretary left slightly early. So, the rest of the CLP carried on with the meeting, and were able to pass a motion of no- confidence in Keir Starmer and David Evans.

“This reign of terror cannot go on”

Joining the list of suspended members, former chair of South Thanet, Norman Thomas, was suspended after allowing a motion to be debated at his local CLP meeting.

The motion which Thomas allowed to be discussed called for the restoration of the whip to Jeremy Corbyn, a motion that only 51 CLPs were able to pass.

The current leadership has launched a kind of ‘reign of terror’ in the party, ordering people not to even talk about these issues at their local meetings and suspending anyone who dares to fight back. This cannot go on.

Our findings so far are clear. Labour Party members are rebelling and demanding the freedom to discuss these important issues.

Local branches, meanwhile, are also speaking up, and they are beginning to ask for the party to promote an open conversation. With the EHRC report on members’ minds, there is a growing group of people who don’t want the Labour Party to shut-down this topic. How far they will go in order to have this conversation remains to be seen.

The Labour Party have been contacted by The Canary for comment, but had not responded at the time of publication.