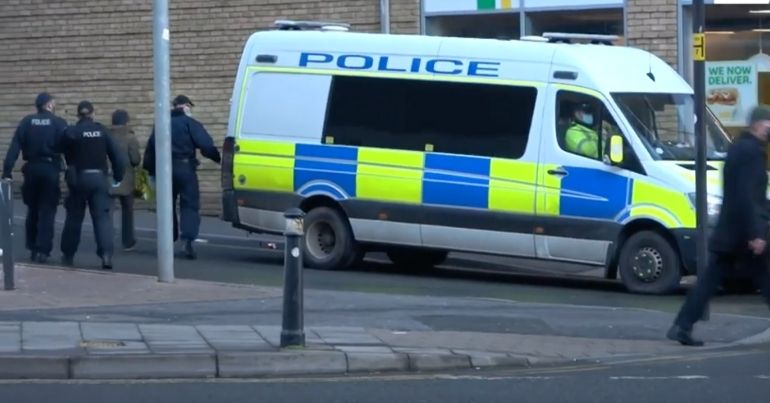 On 25 January, Avon and Somerset police arrested literary activist Ros Martin outside Bristol magistrates court for damage to the pavement by chalking and a breach of coronavirus (Covid-19) regulations. Martin has made a number of complaints to the police force for what she believes is “unlawful arrest, detention & discriminatory treatment”. Her case reflects widespread issues of police disregarding people’s health, using coronavirus regulations to clamp down on protest, and institutionalised racism in the Avon and Somerset police force.

Blatant disregard for safety during a pandemic

While taking her daily cycling exercise alone, Martin stopped outside Bristol magistrates court to chalk “let justice prevail” on the pavement to express solidarity with the ‘Colston four‘. Contrary to the force’s “misleading” online account, rather than follow recommended practice to engage, explain, and encourage those breaching lockdown regulations to disperse, police immediately arrested the literary activist.

I was alone at the time, there was no other protester, I had a mask on and socially distanced, wrote three words and was immediately arrested.

According to Martin – a 59-year-old Black woman who is immuno-suppressed and has an underlying health condition – police showed a disregard for her safety. They failed to carry out an adequate health risk assessment, and when Martin struggled due to arthritis, they roughly “hoisted” her into the police van. Martin felt the arrest put her in unnecessary danger of contracting the deadly virus.

Using coronavirus regulations to clamp down on peaceful protest

Martin believes her “heavy handed” arrest to be disproportionate to the alleged crimes of chalking the pavement and breaching coronavirus restrictions.

In her statement, Martin said:

I believe Avon and Somerset were using Covid regs to politically silence an individual creative dissenting voice and make an example of me.

A spokesperson from Bristol Copwatch told The Canary:

We are facing a difficult battle to retain our civil liberties and right to protest under increasingly draconian COVID-19 emergency powers.

The police have a duty of care to engage with the public and explain the law, encourage them to change their behaviour and enforce as a last result only. It’s clear that Avon and Somerset police were disturbingly keen to flex their muscles… A trait that is becoming all too common with forces across the UK.

Indeed, Martin’s case is part of a worrying trend of British police using coronavirus regulations to clamp down on peaceful protest. In 2020, the Met police used coronavirus measures to intimidate Palestine Solidarity protesters. And the Network for Police Monitoring (Netpol) found that police failed to uphold their legal duty to facilitate the public’s right to protest during Black Lives Matter demonstrations. More broadly, we have seen a rise in police infringing ordinary people’s civil liberties following the introduction of new offences and increased police powers due to the pandemic.

Another case of discriminatory policing in Bristol

According to Martin, policing that day was “discriminatory and uneven”, with police arresting some protestors, warning others, detaining some, while allowing others to go home with a fixed penalty notice. Police detained Martin for four and a half hours. Meanwhile, they sent a visibly white woman home who was arrested for the same offences with criminal charges dropped.

Regarding her detention, Martin said:

I felt the prolonged detention by the custody officer wholly unnecessary, and indeed somewhat maliciously motivated, a waste of police time, resources and reduces public confidence when a penalty notice could have been issued in the street. I felt I was being treated like a criminal, put at unnecessary risk of Covid, and definitely compromising my health… I was never at any stage causing damage, public nuisance, obstruction or a risk.

We feel that the police were not at any point treating all protestors equally or fairly, and from what we can see, there is once again clear evidence of racial discrimination echoing through their ranks. This sadly is nothing new to Bristol, but for the police to so brazenly target a Black protestor is beyond the pale. We are seeing disproportionality rear its head once again with people of colour when it comes to Covid fines and the policing of our communities, and it’s clear that when it comes to political policing in the city PoC protestors are not treated equally in comparison to their white counterparts.

This bears the hallmarks of those in positions of authority who clearly have an agenda that must be challenged and the officers responsible must, without a shadow of a doubt be held to account. We would like to ask the police why they relentlessly harass anyone who isn’t white. How can they claim to be tackling institutional racism when we see cops on the street routinely abuse their authority?

The relationship between the police and Black communities in Bristol has a long, fraught history which is yet to be addressed on an institutional level. A 2019 freedom of information request revealed that although 160 allegations of racism have been lodged against the force since 2014, only 1% of outcomes were “upheld”.

These disgraceful statistics are reflected in people’s first-hand experiences, such as a Black man who caught police on camera carrying out an unnecessary stop and search. In 2017, Bianca Durrant won a court case against the force on the basis of racial discrimination. And Bristol police’s repeated targeting and tasering of then-64-year-old race relations adviser Ras Judah Adunbi demonstrates that even Black elders and community leaders aren’t safe from harm and humiliation at the hands of local police.

Martin launched her complaint in the hope that police might learn of the “devastating impact of poor policing on a member of the public and to public confidence”. She told The Canary:

What I found most shocking at the time was how routine it all appeared.

Avon and Somerset police must be held to account. It is evident that the force needs more than training and greater diversity. It urgently needs a dramatic shift away from a toxic culture that discriminates against Bristol’s Black population and emboldens officers to abuse their power.

A spokesperson from Avon and Somerset police told The Canary:

We can confirm we’ve received a complaint relating to the arrest of a woman in Bristol on 25 January. Our Professional Standards Department are looking into the complaint and it wouldn’t be appropriate for us to comment further while these enquiries are ongoing.