The British police are using COVID-19 measures to criminalise protest. We need to be ready to fight back. - The Canary 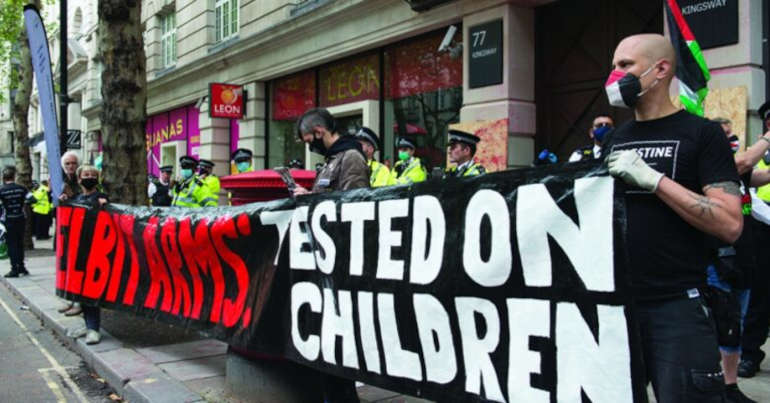 Increasing evidence is emerging that the police are using coronavirus (Covid-19) legislation to criminalise and disrupt protests.

Back in June, after Black Lives Matter demonstrations swept across the UK calling for an end to police violence, the Police Federation called for an outright ban on protests in the UK. The Federation said that the ban was necessary in the context of the coronavirus pandemic. The ban wasn’t enacted, but it shows that top police officers have been pushing for authoritarian measures.

With the government announcing further restrictions on gatherings of more than six people, it is more important than ever that we collectively fight back and don’t allow the state to use this legislation as a protest ban. While we all need to take action in response to the pandemic and look out for each other, our freedom to demonstrate is non negotiable. We need to defend our freedom to act collectively and to defend ourselves and our communities.

On 5 September, the Met police threatened to arrest Palestine solidarity protesters in London under Coronavirus legislation.

This video from Real Media shows officers threatening to arrest demonstrators at a protest outside the offices of the Israeli arms manufacturer Elbit:

No freedom to protest under new coronavirus measures

At the time of the Palestine Solidarity protest, coronavirus restrictions had eased allowing for the reopening of most businesses, but still restricting gatherings of over 30 people.

There are a number of exceptions to the 30 people maximum. For example, for gatherings organised by businesses or those related to work, training, or education.

There is only a limited exemption to the legislation to allow campaigners to organise protests. And on 8 September, new coronavirus regulations were announced by the government further limiting gatherings to six people. This legislation is due to rising coronavirus cases, but it does seemingly put strict limits on the size of demonstrations while allowing other activities like schools and weddings to continue. Under the new government guidance, protests will only be allowed when they are:

It is necessary for us to come together and demonstrate, particularly in a time where the government is awarding itself increasingly authoritarian powers off the back of this crisis. We need to determine when and how it is necessary to take collective action, and not leave it to the state to deem when protest is necessary.

According to the lockdown regulations, only businesses, charities, political parties and public bodies can organise gatherings of 30+

This excludes campaigners and community groups

The Met’s policing of last Saturday’s Palestine Action protest is only one of an increasing number of instances where the police have used coronavirus legislation to try to break up demonstrations.

One protester was arrested for demonstrating, even though he was taking part in a socially distanced protest in Parliament Square.

In the run-up to the August bank holiday weekend, Black community organiser Ken Hinds was threatened with arrest and prosecution for organising an anti-racism demonstration in Notting Hill, dubbed the Million People March.

The Guardian quoted an email Hinds had received from the Metropolitan Police warning him that he was not qualified to organise a demonstration as he was not:

a business, a charitable, benevolent or philanthropic institution, a public body, or a political body. What this means is that you are encouraging anyone attending to commit an offence contrary to [Health Protection] regulations 5 and 8

Hinds has since launched a legal challenge against the Met, and the march was eventually allowed to go ahead.

“This is a protest ban and it needs to END”

On 2 September, 10 Downing Street’s Twitter account tweeted that ‘Gatherings of more than 30 people are illegal’, and warned of fines of £3,200 for those prosecuted. But Big Brother Watch responded by highlighting the fact that the measures amount to a protest ban:

Unless you’re in a pub, restaurant, workplace, gym, school… 🤔

This is a protest ban and it needs to END.

Attending a peaceful demonstration should not be a criminal offence. https://t.co/IRLmBY7JqP

The Network for Police Monitoring responded:

This weekend Priti Patel threatened new restrictions on the right to protest and the Police Federation in London has called for an outright ban. Today, we begin consulting with the organisations we work with on a new Charter for Freedom of Assembly Rights https://t.co/vOVNaDMiRA pic.twitter.com/FTA5xRHyzh

We need to be ready to fight back against state control

The coronavirus pandemic is only the latest justification that the state has used to try to prise our freedoms away from us and attack our power to act collectively.

Margaret Thatcher and John Major’s Conservative governments mobilised fears of the Left, and of workers’ collective power, to introduce successive pieces of legislation aimed at restricting the ability of trade unions to take effective collective action, while the Tory Criminal Justice and Public Order Acts of the 80s and 90s scapegoated travellers, squatters, and ravers as a way to mobilise support for further restrictions on the freedom to protest. To read about this history see Chapter 16 of Corporate Watch’s book: Managing Democracy, Managing Dissent [written by the author of this piece].

The Labour governments of the late 90s and early 00s consistently used the threat of ‘global terrorism’ to introduce repressive terrorism legislation that criminalises Kurdish people and other communities involved in liberation struggles. The term ‘domestic extremist’ was also coined under Labour, and has been used to mobilise state repression against the UK’s animal liberation and ecological movements.

The Tory governments of the last decade have continued Labour’s scapegoating of Muslim communities and continued expanding the scope of its Prevent legislation, which aims to create a climate of fear, particularly amongst Muslims and other marginalised communities.

Using coronavirus regulations to justify the repression of protest is just another step in the state’s attack on our ability to collectively organise to defend our communities, to resist corporate power, to stop ecological destruction, to strike for better pay, to stop the landlords from evicting us, or the Border Agency from deporting our comrades.

We need to take note of this new state attack on our freedoms and be ready to fight, as we have done before, to maintain our collective power.