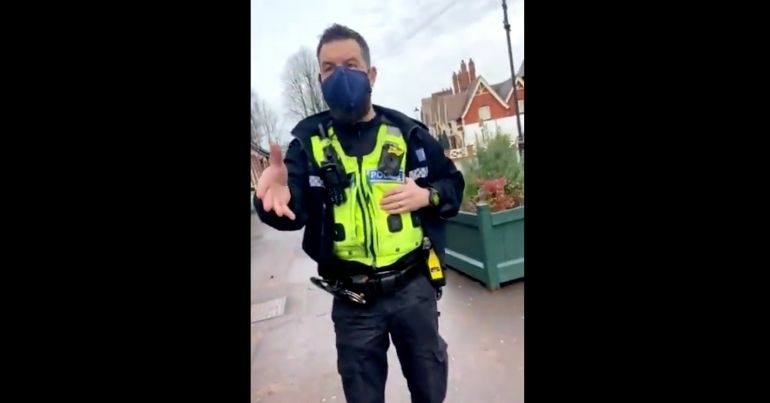 On Wednesday 27 January, a Twitter user shared a video of a West Midlands police officer stopping, harassing and arresting a man on his way to work. The officer’s abuse of police power reflects the draconian policing that has taken place throughout the coronavirus (Covid-19) pandemic. With the introduction of new police powers, we have seen officers lean further into toxic police culture. This incident isn’t the case of one rogue officer, but reflective of an institution built to protect the elite and disempower ordinary people.

In the video, a police officer stops a commuter and asks for his personal details under the guise of enforcing coronavirus legislation. The officer proceeds to harass the man, then arrests him for refusing to disclose his name and address, saying “we’re the police, not just ‘someone’, you idiot”.

My boy on his way to work this morning straight harassment and abuse of power @WMerciaPolice pic.twitter.com/XEFZY9yJyI

Kevin Blowe, coordinator for the Network for Police Monitoring (Netpol) told The Canary:

The person who was stopped complied by explaining he was on his way to work but although the police can stop you at any time and ask you questions, you do not have to answer them or give your personal details. Demanding a name and address was unlawful…

Police officers often use the authority of their uniform, the threat of arrest or outright aggression to frighten people into handing over personal details when there is no legal basis for demanding it.

He highlighted the importance of filming interactions with the police, saying:

It is remarkable that the young man not only managed to stay so calm but kept filming: without the video, this would have been just another everyday abuse of police powers, currently made worse by the guise of ‘enforcing lockdown regulations’, that would never have led to any possibility of accountability.

Solihull police commander, chief superintendent Ian Parnell responded to the video, confirming that the incident will be investigated. And the police force has now issued an apology. But as Blowe highlighted, it is unlikely this would have happened without the footage taken by the man.

But this is far from an isolated incident. The introduction of new offences and increased police powers in response to the coronavirus pandemic have given officers more opportunities to infringe people’s civil liberties.

Over the course of the pandemic, we have seen an increase in stop and search figures, inconsistent enforcement of lockdown measures, and Tories flouting the rules while ordinary people are met with extreme policing. People from ethnic minority and socio-economically marginalised groups have been disproportionately affected by the inconsistent, authoritarian policing of the pandemic. Black Lives Matter protesters were subjected to oppressive policing while exercising their right to protest. And unnecessary arrests put people at great risk of contracting the deadly virus. Prime minister Boris Johnson’s “non-essential” trip to Scotland confirms that there’s one rule for the ruling elite, and another for ordinary people.

In these troubling times, it is extremely important for ordinary people to stand up for their rights and challenge the unequal, draconian policing of this pandemic.