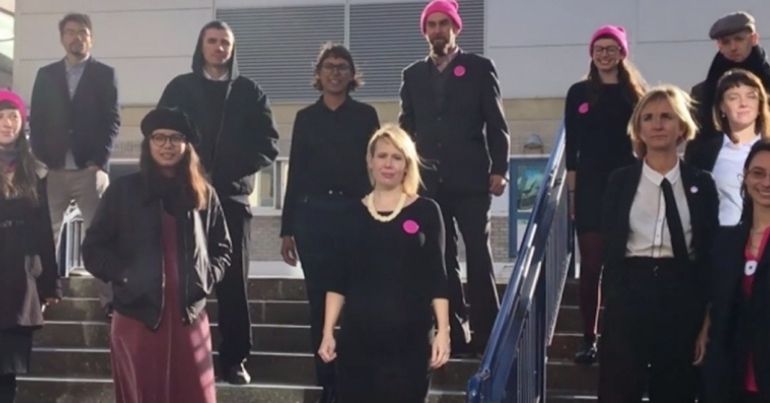 The Stansted 15, who stopped a deportation flight taking off, have had their terrorism convictions overturned on appeal on 29 January.

The group were found guilty of a terrorism-related offence on 10 December 2018 after locking themselves together to prevent a chartered deportation flight taking off with people from Nigeria, Ghana and Sierra Leone aboard. 11 of the people due to be deported that day are still in the UK. The maximum sentence for the offence was life imprisonment.

On 28 March 2017, activists cut a hole in the perimeter fence and entered London Stansted Airport. One group locked themselves together using tubes. The other “erected a two-metre tripod from scaffolding poles behind the engine on the left wing of an aircraft”. A banner was displayed with the slogan “No-one is Illegal”.

Mel Evans, one of the defendants, described why she took action:

I want to go back to the really simple call for help that we heard and that we acted on. These were her words:

“My ex-husband said he knows I am being deported next week. He is waiting for me. He is planning to kill me. I don’t want to go on that plane. I can’t go. I am begging.”

It ‘dominated our lives’

Following the news, one of the defendants, May MacKeith, stated on behalf of the group:

It is painful for it to be finally acknowledged that the past four years’ of prosecution should never have happened. But for many people caught up in the UK immigration system the ordeal lasts much, much longer. In the middle of a global pandemic the government is still locking people in detention centres and brutally forcing people onto secret night flights, often to places they don’t know.

The nightmare of this bogus charge, a ten week trial and the threat of prison has dominated our lives for four years. Despite the draconian response we know our actions were justified. 11 people, including survivors of trafficking, who would have been deported that night are still in the UK. Mothers, fathers, colleagues, friends and family members are rebuilding lives the government attempted to destroy.

To help us move closer to something that truly represents justice we need to challenge the cruel and racist logic that builds prisons and borders. That means stopping all deportation charter flights, closing all detention centres and ending automatic deportation of people who have been convicted of a crime. It means migrants should have the right to welfare support and not to be forced to live in appalling conditions or forced into unnecessary and dangerous reporting. It means dismantling the Home Office and enabling free movement for all.

Huge congratulations to the #Stansted15 for their victory today! Convictions quashed, vindicated once again

One of the activists, Ben Smoke, tweeted an image of himself wearing a shirt that said ‘ex-terrorist’.

BREAKING: WE (the #Stansted15) WON OUR APPEAL!! I'm so happy. I can't stop crying. We fucking did it!!! 😭😭😭 pic.twitter.com/EWWnodPaup

Supporters were understandably happy about the landmark win:

When they stood up for human rights & brought gross injustice to light, they were charged with terror offences.

Now the Lord Chief Justice says they had "no case to answer". Huge victory for the Stansted 15 & the right to protest.

BREAKING: We've just heard the news that the #Stansted15 convictions have been quashed.✊

This is a good day for justice. The #Stansted15 will take their place in the history books as human rights defenders who bravely brought injustices perpetrated by the state into the light. pic.twitter.com/H8yQGkGQNI

It should be a matter of great shame to the CPS and the Attorney General, that terror related legislation was used against peaceful protestors. Both have questions to answer as to why they authorised such an unprecedented charge. The plain fact is that the British Cabinet Minster consented to this prosecution with wholly inappropriate terror related charges against those who oppose their Government’s flawed and unlawful immigration policies. Amnesty International adopted the 15 as human rights defenders, Liberty intervened in the case and even the UN, through their Special Rapporteurs, expressed concern, yet the case went forward. Even now, the State does not draw a line and concede that they will not take this matter further and they will drop any remaining charges. These defendants have been through enough. We should focus on the inhuman migrant policies that this Government continues to pursue, rather th[an] continued criminalisation of protest.