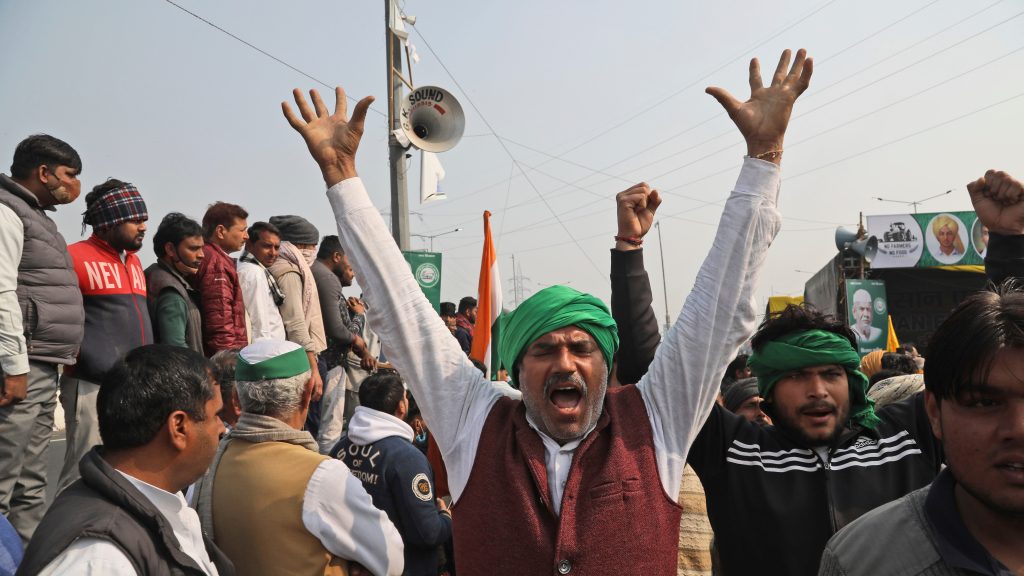 Indian farmers and their leaders, spearheading more than two months of protests against new agriculture laws, have started a one-day hunger strike. They’re directing their fury at prime minister Narendra Modi and his government.

Farmer leaders said the hunger strike will reaffirm the peaceful nature of the protests. It coincides with the death anniversary of independence leader Mahatma Gandhi.

Farmers are demanding the withdrawal of laws passed by parliament in September 2020. They say these laws will favour large corporations, devastate the earnings of many farmers, and leave behind those with small plots.

The long-running protests have largely been peaceful. But violence erupted on 26 January, India’s Republic Day. Tens of thousands of farmers riding tractors and on foot stormed the 17th-century Red Fort in a brief but shocking takeover. Clashes between the protesters and government forces left one protester dead and nearly 400 police injured.

Officials didn’t say how many protesting farmers were injured. But television channels showed many of them bloodied after police in riot gear hit them with batons and fired tear gas. Police also filed cases against journalists, activists, and opposition politicians, accusing them of sedition and inciting violence.

Modi and his leaders have claimed the laws are necessary to modernise Indian agriculture. However, farmers have vowed to stay at protest sites until the legislation is repealed.

Since November, tens of thousands have hunkered down at the edge of the capital while multiple rounds of talks with the government have been unsuccessful.

The protests by farmers, the most influential voting bloc in India, pose the biggest challenge to Modi. They brought together 16 opposition parties on 29 January when they boycotted the president’s address to parliament.

Sporadic clashes between protesters, police, and unidentified groups shouting anti-farmer slogans have broken out since the tractor rally on 26 January

On 29 January, a group of around 200 people, claiming to be local residents, barged into one protest site despite heavy security. They threw stones at farmers and damaged their tents. The group demanded that farmers leave the area. And they said the farmers had “insulted” the national flag during their tractor parade on Republic Day.

The farmers alleged that the vandals were largely made up of members of a Hindu nationalist group that has close ties with Modi’s party.