Once again the Tories throw students under the bus - Canary 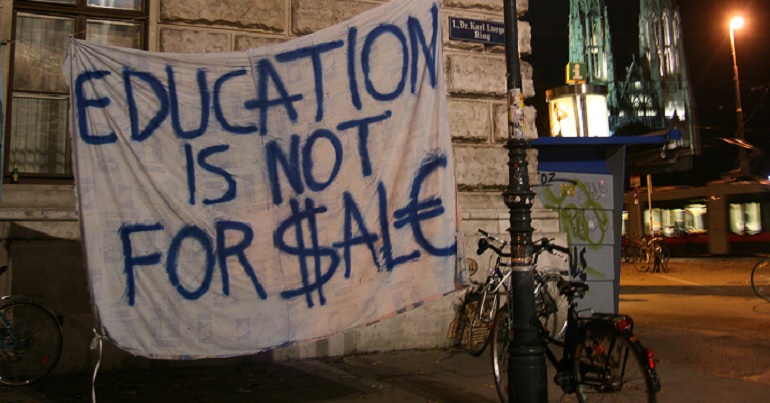 The government just refused to budge on a crucial issue for university students. It is one that has been at the forefront of political debate for nearly a decade, although the coronavirus (Covid-19) pandemic has driven the problem home. Yet still, the Tories are refusing to act to rectify an appalling situation.

Tuition fees: always in the spotlight

University students have been paying tuition fees since 1998 when Tony Blair’s government introduced them. Then, the fees were £1,000 a year. But in 2004, Labour put them up to a maximum of £3,000. And when the Tory-Lib Dem coalition took charge in 2010, it raised them to a maximum of £9,000 a year. Students, trade unions and opposition political parties have objected ever since. And the issue of tuition fees has become even more contentious during the pandemic.

The Canary has reported on the situation for students during the various lockdowns. As it previously wrote, many students have not been living in their halls of residence all the time during the pandemic. Moreover, a lot of their learning has been online. So, people have been questioning why students still have to pay both rent and the full tuition fees – given that they’re not receiving a complete service for either.

And someone also started a government petition over tuition fees.

A half a million-strong petition

It states that the Tories should:

Call[s] on the government to consider holding debates in Parliament between MPs and university students to raise/discuss issues that affect them. It will allow students to voice their opinions and concerns about tuition fees of £9250 a year which are too high, particularly as grants have been removed

As of 10am on Friday 29 January, over half a million people had signed the petition. And the government has responded. But what it said is not what many people were hoping for.

The government stated that:

Tuition fee levels must represent value for money and ensure that universities are properly funded. Government is not considering a reduction in maximum fee levels to £3,000.

This is a difficult time for students and Government supports the desire of everyone in higher education (HE) that students continue receiving the best possible learning experience, while recognising the wide range of issues that have arisen from the pandemic.

But students and some of the media have claimed that their tuition fees are not “value for money”.

The Telegraph columnist Victoria Lambert was scathing of the government’s petition response. She wrote:

What stands out to you? Is it the phrase “Value for Money”? Clearly this is nonsense when many students have missed swathes of practical instruction in areas from engineering to music that cannot be replicated via Zoom.

Or perhaps it’s the hand-wringing “difficult time for students”? You bet it is. Thousands of young people are wondering how they have spent chunks of the past six months either locked up on campus, threatened with absurd and petty fines or back home, sharing the family WiFi as they try to study fluid dynamics and number theory while sharing a bedroom with their Lego-mad younger sister. They may also be poleaxed with grief having lost a grandparent to Covid.

Yet the government seems unrepentant.

Students: put up or shut up

It went further in its response to the petition. It somewhat pointedly said:

Students have made their voice heard through a range of e-petitions over the past year. Government’s responses to previous petitions on fee refunds can be read here… [web link] The Petitions Committee held an inquiry into the impact of Covid-19 on students, and Parliament debated its impact on students on 16 November 2020… Students may engage with the democratic process further by writing to their MP.

In other words? Students should keep quiet. Because the Tories have had enough of hearing from them.

The challenge with the situation is that the problem isn’t new. The pandemic has just exposed tuition fees for the pernicious money-making scheme they really are. What happens now could be game changing. Students must continue to work together, collectively, to force the government to act.