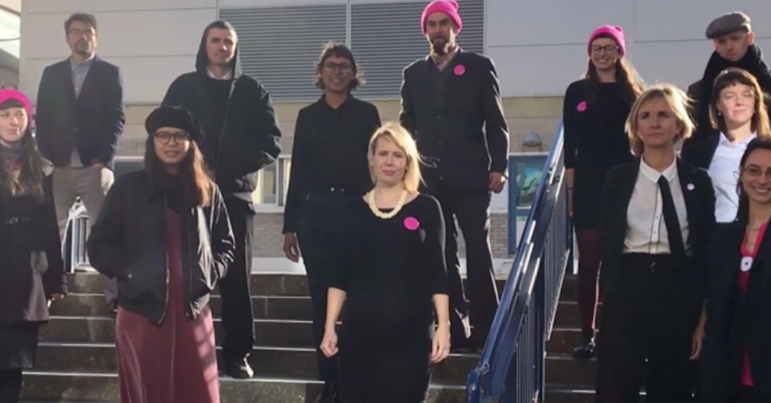 A jury in Chelmsford is deliberating whether 15 people who responded to a “call for help” should be convicted of a terrorism-related offence carrying a maximum sentence of life imprisonment.

The 15 locked themselves together to prevent a chartered deportation flight taking off. The flight was taking people to Nigeria, Ghana and Sierra Leone. 11 of the people due to be deported that day are still in the UK.

Although the judge has ruled that the jury should not consider the reasons why the 15 took action, the people involved gave evidence as to why their actions were necessary and why they did not endanger airport security.

On 28 March 2017, activists cut a hole in the perimeter fence and entered London Stansted Airport. One group locked themselves together using tubes. The other “erected a two-metre tripod from scaffolding poles behind the engine on the left wing of an aircraft”. A banner was displayed with the slogan “No-one is Illegal”.

One of the defendants, Mel Evans, who defended herself, explained to the jury why she took action:

I want to go back to the really simple call for help that we heard and that we acted on. These were her words:

“My ex-husband said he knows I am being deported next week. He is waiting for me. He is planning to kill me. I don’t want to go on that plane. I can’t go. I am begging.”

Speaking about the Home Office, Evans said that it wasn’t “keeping… people safe” and that:

When no other part of the system

is working to protect people from harm it is protected in law and it is part of the democratic process to intervene.

The 15 were charged with intentionally disrupting services at an aerodrome under the 1990 Aviation and Maritime Security Act; an offence that was introduced after the Lockerbie bombings. Given that the charges carry a maximum sentence of life imprisonment, campaigners have warned that the 15 are being scapegoated with the aim of deterring protest. Similar protests at airports have led to charges of offences such as aggravated trespass, which only carry a maximum sentence of three months’ imprisonment.

Amnesty International also sent observers to the trial because of these concerns. UK director Kate Allen described it as:

using a sledgehammer to crack a nut.

Human rights defenders are currently coming under attack in many countries around the world, with those in power doing all they can to discourage people from taking injustice personally. The UK must not go down that path.

Kevin Blowe, coordinator of the Network for Police Monitoring, agrees that it is a “deliberate attempt” to “crack down” on those taking action. He told The Canary:

The Stansted 15 acted out of necessity as last resort to stop the deportation of vulnerable people to an uncertain fate.

However, charging them with “endangering safety at aerodromes”, a law intended to fight terrorism, seems like a deliberate attempt by the CPS to send out a message: prosecutors will crack down hard on anyone prepared to take direct action to defend human rights.

Campaigners who are bravely fighting injustice deserve our praise and admiration, not the threat of imprisonment.

According to Evans, lives were saved as a result of the action:

We know 30 people were deported two days later, and another 16 deported in the following months, but that 11 people are still here.

Four of those people were women who were referred to a trafficking support group, and one person has had his case approved. He’s the one from the flight that I’ve met, [whose] girlfriend is British, and who only found out she was pregnant once he was taken into detention to be deported.

Because he stayed, he got to be with his girlfriend when she gave birth to their third child. For her and for him, I know that it meant so much that they could be together.

Evans is clear about why she took action:

This was never about politics. It was always about people. We wanted people to be safe. To make them safe, we had to take action safely. The two are tied together.

And now some of them are safe, and they’re able to be with their families and be with the people they love. And that’s all we were trying to do.

The defendants have received support from high profile politicians and commentators, including David Ramsbotham (formerly HM chief inspector of prisons), who signed a letter supporting their actions. The letter is clear that the action was both right and successful:

The Stansted action was the first time a deportation flight has been grounded in the UK by people protesting against the immigration system. People who would have been forced on to the flight were able to stay in the UK because of the action, as it gave them time to have their applications heard.

Signatories also included MPs David Lammy and Caroline Lucas, who called for the charges to be thrown out:

People across the UK are standing together to stop the Home Office breaking up families and tearing communities apart. We call for all charges against the Stansted 15 to be dropped and for the Home Office to immediately cease chartering flights for deportation.

Whatever the jury’s decision, it is clear that the actions of the 15 saved lives. They received a “call for help”, and they acted. They did what the Home Office failed to do. A department fixated with a hostile environment would have deported all those people. And if those 15 people hadn’t taken action, the future of the 11 people who stayed in the UK would have been very different.

Whether or not the 15 broke the law is something the jury will decide. But without doubt, they acted bravely and morally. And we should not only thank them but stand with them and take action to stop future deportations.