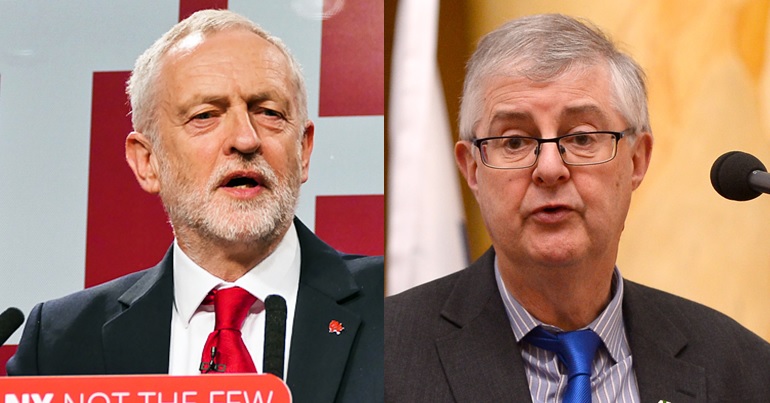 Corbyn-supporting candidate Mark Drakeford has just become the leader of Welsh Labour – and will therefore almost certainly be the next first minister of Wales. And many left-wingers on Twitter are celebrating his election as a big step forward.

And as the New Statesman pointed out:

The newly-elected Welsh Labour leader has the chance to put Corbynism into practice – and he can expect to be watched closely if he does.

The reasons why I support Jeremy Corbyn, and the democratisation of our party, lie in the political tradition to which I belong – the mainstream radical, Welsh socialist tradition.

And Twitter users on the Labour left were quick to express their hope for the future under his leadership:

Congratulations to socialist @MarkDrakeford on being elected leader of Welsh Labour today ✊ pic.twitter.com/WavehyExxw

Congratulations to @MarkDrakeford on his election as leader of @WelshLabour – a brilliant result and an inspiring platform of ideas to take Wales forward. pic.twitter.com/RHFLaeWxOd

‘Labour Basic Income’ congratulate @MarkDrakeford’s campaign to become leader of Welsh Labour. He will be a fantastic First Minister of Wales.

Drakeford has previously made comments in favour of Universal Basic Income. pic.twitter.com/3SyNRJ4Sb4

Congratulations to socialist @MarkDrakeford on being elected leader of Welsh Labour today. A loyal Corbyn supporter who will transform Welsh Labour & bring it in line with the UK party's leftist principles. Solidarity 💪

Huge congratulations to the new Welsh Labour leader, the super sharp socialist Mark Drakeford. Even though they're punished by Tory austerity like the rest of us, let's hope Wales can set an example for progressive politics the rest of us can follow. https://t.co/Erjsjrlucp

Support from further afield in Wales

Congratulations @mark4leader! @DanBeardUnison: We congratulate Mark Drakeford, a UNISON member, on becoming leader of @WelshLabour. UNISON Labour Link Cttee has been proud to support Mark and we look forward to working with him in future @Petercrews18 pic.twitter.com/DcjN6EssIE

Wonderful to hear @shavtaj tell us that Mark Drakeford has always been open, honest & approachable even when there have been tough discussions with Trade Unions. He has never shut the door. He really stands with us and the trade union movement. @mark4leader ✊ #C21Socialism pic.twitter.com/yZTSFtN5Ua

Congratulations to Mark Drakeford on becoming the new First Minister of Wales.

We look forward to working with you to scrap Trident. pic.twitter.com/nBEqS6NvDp

Newly elected leader of @WelshLabour, @MarkDrakeford is a strong supporter of Proportional Representation – and is from a Constituency Labour Party that unanimously backed electoral reform earlier this year.

And a politician that wants a second vote, a #PeoplesVote Congratulations indeed. #Brexit pic.twitter.com/PCiMEWTbkW

Congratulations to the new leader of @WelshLabour, @MarkDrakeford.

We look forward to working with you in opposing this blind and botched #Brexit deal.#NotMyBrexit #PeoplesVote pic.twitter.com/dYEqDsmST3

Congratulations to Mark Drakeford on becoming Welsh labour leader today. He pledged to make Wales "a beacon of hope in a darkening world and a future which works for the many in our society and not simply for a privileged few". We sincerely hope he makes good on that pledge

Drakeford’s past, present and future

Although Drakeford is likely to face some minor opposition, analysts expect the Welsh assembly to elect him as first minister next week.

The new Welsh Labour leader is definitely not without his critics, though. As the BBC reported, Drakeford is on the left, but some see him as a “pragmatist”. He has been a “passionate” defender of the Welsh NHS, for example, overseeing budget increases and proposing an “annual review of PFI contracts across the Welsh public sector, and to buy them out where that is better for public finances”. In a finance role in government, however, he had to oversee “less generous settlements” (or even cuts) in other areas. This is one of the criticisms his opponents have of his record. Another, meanwhile, is the fact that the UK, Scottish, and Welsh Labour leaders are all now old white men. And indeed, that is an area Labour definitely needs to work on.

Overall, though, there seems to be hope that Drakeford will move the Welsh government towards the left, putting into practice some of the policies behind Jeremy Corbyn’s popularity. And that would be very interesting to see.