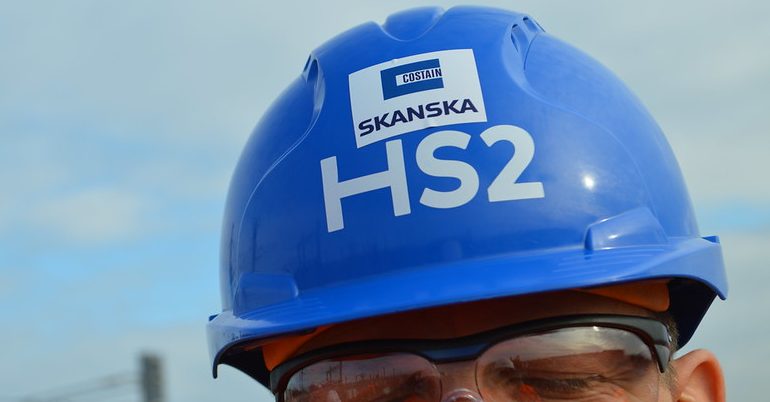 The latest in the #FollowTheMoney series has found that the Cabinet Office ignored a request by a member of the House of Lords to investigate a minister, a civil servant, and the chair of HS2 LTD over allegations they misled parliament and broke codes of civil service.

The Cabinet Office has told The Canary it isn’t investigating allegations that ministers broke the ministerial code through misleading parliament over the budget of HS2, which could cost as much a £142.02bn.

The document states there are concerns that ministers broke the ministerial code under paragraph 1.3 by:

Documents seen by The Canary state that Nusrat Ghani, a junior minister employed by Department for Transport (DfT) ‘misled’ parliament on five occasions:

Ms Ghani mislead select committees & parliament 5 times for the sole reason that MP’s would not become aware of the £20bn cost increase & the 5 year delay before & during the HS2 phase 2a debate.

The document also claims that the permanent secretary for the DfT has broken the civil code. Bernadette Kelly, a former employee of the Cabinet Office has been accused of misleading select committees and parliament, for the sole purpose of burying information:

Ms Kelly would seem to have mislead select committees & parliament for the sole reason that MP’s would not become aware of the £20bn cost increase & the 5 year delay before the HS2 phase 2a debate.

Mr Cook & Mr Thurston mislead parliament & select committees for the sole reason that MP’s would not become aware of the £20bn cost increase & the 5 year delay before the HS2 phase 2a debate.

Included in documents sent to the Cabinet Office is a detailed timeline indicating that ministers and civil servants actively misled parliament about the cost of HS2.

Oct 2018 – The National Audit Office (NAO) published the HS2 progress report. It found that HS2 contractors estimated that the main construction costs were 83% above the budgeted price. HS2 Ltd formally notified the DfT that there were “significant challenges to the affordability of the programme”.

Jun 2019 – The now former chair of HS2, Allan Cook informed the DfT there was ‘no prospect’ of HS2 Ltd delivering phase 1 in budget.

Jun 2019 – The Infrastructure and Projects Authority undertakes a review and concludes that successful delivery is unachievable.

July 2019 – In early July, officials provide the accounting officer and HS2 Ltd chief executive with updated advice, which concludes that Phase One is unaffordable

15 July 2019 – At a debate in the House of Commons, Nusrat Ghani, a junior minister employed by DfT ‘misled’ parliament. When asked about the HS2 budget, she failed to inform ministers of a £20bn increase in cost. A cost increase that the DfT knew about.

The NAO HS2 report shows that by the time of the debate (15 July 2019) the DfT knew that HS2 could not be completed within its budget.

The document also states that the DfT had received several reports and drafts of stocktake, which stated HS2 couldn’t be completed within budget:

The DfT has argued that at the time of the debate, ministers wished to continue to test whether remedial action could be taken to hold the existing budget & schedule. The NAO HS2 report, shows that by the time of the debate, the DfT had received the HS2 draft Stocktake & the IPA review, which both concluded that HS2 could not be achieved within the current budget.

But it’s not just these documents that claim the DfT knowingly misled parliament, government committees have said it too.

On 6 May 2020, the Public Accounts Committee (PAC) published a report which clearly states that the DfT knowingly misled and withheld information from Parliament. Echoing Berkeley’s concerns:

The Department and HS2 Ltd were aware of the scale of the issues facing the programme as early as October 2018. In March 2019 HS2 Ltd formally notified the Department that it could not deliver Phase One to budget and schedule.

Despite being aware of these issues, the Permanent Secretary withheld from us that the programme was in significant difficulty when she appeared before the previous Committee in October 2018 and May 2019, even in response to specific questions about the programme’s delivery timeline and budget. HS2 Ltd’s annual report and accounts for the year ending 31 March 2019 similarly failed to give an accurate account of the programme’s problems.

Breaches to ministerial and civil code

Not only did Ghani and Kelly not tell parliament that HS2’s budget was £30bn over it’s budget at the time, but the PAC claim they didn’t tell it either.

Here’s what the PAC had to say about permanent secretary Kelly’s actions:

We are disappointed by the Permanent Secretary’s response to our concerns about her failure to explicitly inform the Committee of the programme’s delays and overspend when asked about the general health of the project. This was something that an accounting officer should share with the Committee. Failure of an Accounting Officer to provide accurate information to Parliament is potentially a breach of the Civil Service Code and a breach of Parliamentary Privilege. Lack of clarity and obfuscation about the budget issues with HS2 risks jeopardising the trust between Parliamentary committees and Government officials.

The Permanent Secretary appeared before the committee in October 2018 and again in May 2019. In March 2019 HS2 Ltd formally told the Department it had breached the terms of the Development Agreement, and would be unable to deliver the programme to cost and schedule – yet the permanent secretary did not inform the committee on either appearance that the programme was in trouble.

This is a serious breach of the department’s duty to Parliament and hence to the public, which as the report says, will undermine confidence. Furthermore, the PAC was in the dark about serious cost overruns and was therefore unable to do its duty to inform Parliament that value for money on the project was at risk.

In a letter to the Cabinet Office the former chair of the Rail Freight Group, lord Berkeley, called for an investigation. His letter clearly outlined the grounds: 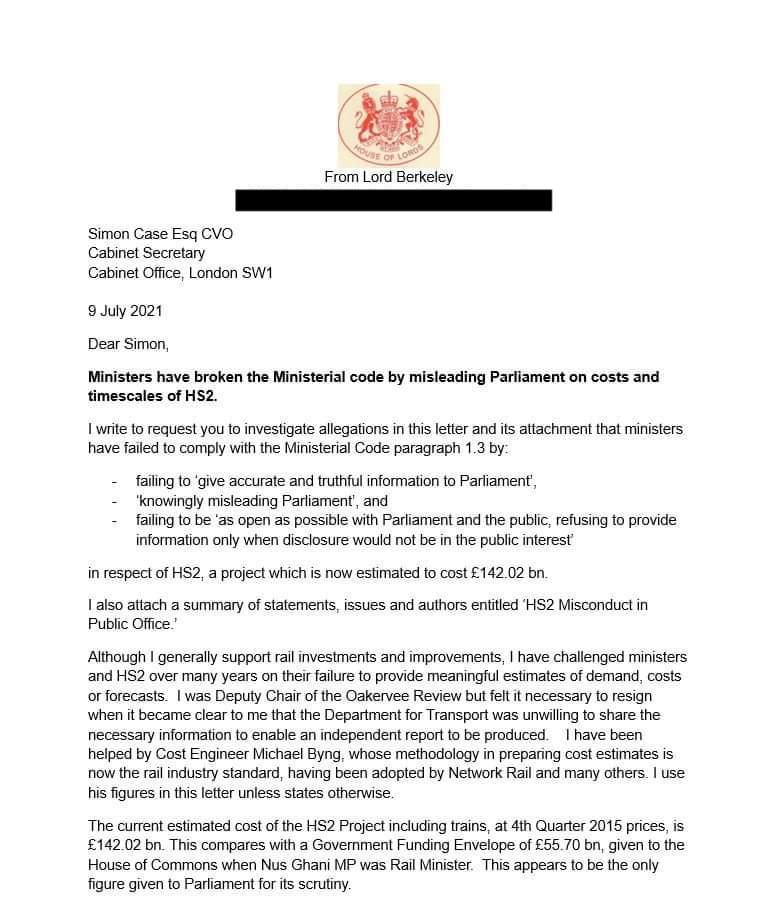 Berkeley didn’t hear back from the Cabinet Office but he was contacted by another government department.

The Cabinet Office told the DfT

The Cabinet Office told the DfT about the letter, which it shouldn’t have because the allegations were about them.

The DfT then responded to Berkeley’s letter, despite not having been contacted by Berkeley in the first instance. The department responded to his letter, stating that:

Parliament was not misled

The letter, seen by The Canary, also included a breakdown of costs for HS2. Now it’s thought that the true cost could be up to £142.02bn.

One of the biggest issues with the DfT’s response is that even if you take the two highest figures the numbers don’t add up. According to its own justification, the total cost would have reached £52bn.

Another issue that stands out is that it’s unclear if this was the budget from 2019, whether this changed, and generally clarifies nothing about the total cost of HS2.

(Taken from documents seen by The Canary).

To make matters worse, the author of that letter is the permanent secretary for the DfT Bernadette Kelly is also one of the people named in the allegations.

I find her response wholly unacceptable; clearly she is seeking to defend her ministers’ and her department’s reputation.

The Cabinet Office: “There is no investigation”

We contacted the cabinet office to ask them whether the concerns of PAC and Berkeley meant allegations would be looked into.

A spokesperson from the cabinet office told us:

On background, there is no investigation.

We also contacted the DfT which issued a joint statement on behalf of itself and the Cabinet Office:

Bernadette Kelly set out the facts in in her published letter to the Chair of the Public Accounts Committee on 10 June 2020. In February last year, this Government reset HS2 and established a realistic budget, strengthened oversight and increased transparency. As part of this, a minister now reports to Parliament every six months on progress, including on costs and schedule. The matters referred to in 2019 were during the previous government. At that time, choices on the scope, timing and cost of the project remained open.

The DfT is absolutely correct in pointing out that Kelly set out the facts in her letter to the PAC. In this letter, she admitted to not sharing information about the scale of the problem surrounding the cost pressures of HS2. The document shows, that she did not share information about HS2’s “cost pressures” because she was not explicitly asked to. After Kelly read the transcripts of herself giving evidence at two separate hearings, she stated:

I stated that the budget for the programme remained unchanged, which was correct at that point. I also indicated work was underway looking at budget and scope to ensure deliverability of the programme. You did not ask me to quantify the size of the cost pressures or to set out in detail the steps being taken by the company or Department in relation to escalation or to manage these.

During this investigation, we reviewed several documents and went through hundreds of pages of reports about HS2. However, what is just as concerning as the sheer negligence of public spending and lack of ministerial transparency is the Cabinet Office’s disregard of allegations.

But this raises further questions. If the government won’t listen to the House of Lords or the PAC, what chance would a member of public have in getting something looked into?

One thing is absolutely clear: those concerned about HS2 and the actions of people linked to it will not stop until the government investigate these allegations – no matter how long they’re ignored.