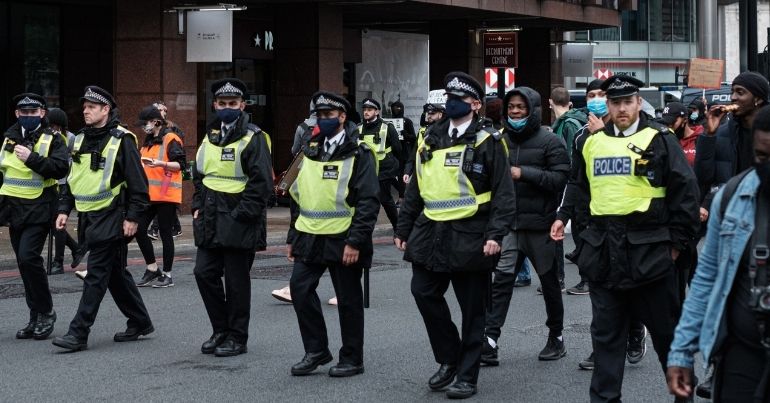 On 25 August, the Independent Office for Police Conduct (IOPC) published a review of the police’s use of taser in England and Wales. The report raises concerns about officers’ disproportionate and inappropriate use of the electronic weapon against Black people, people with mental ill health and learning disabilities, and children. Families of people killed by taser have spoken out, calling for a ban on the use of the electric weapon. And campaigners argue that the police watchdog’s recommendations seeking improvements should go further in order to prevent further harm.

Excessive and disproportionate use of taser

For its report, the IOPC reviewed 101 taser investigation cases. It found that between 2015 and 2020 police in England and Wales were more likely to taser Black people for prolonged periods than their white counterparts. The watchdog also found a pattern of inappropriate tasering against people experiencing mental health crises. It highlighted five cases of police allegedly firing the electrical weapon wrongfully. IOPC director general Michael Lockwood concluded by saying that “policing has to change and be more responsive to community concern or risk losing legitimacy in the eyes of the public”.

Responding to the report’s findings, the IOPC highlighted concerns about the police’s use of the electronic weapon. It set out 17 recommendations to the College of Policing, the National Police Chiefs’ Council, the Association of Police and Crime Commissioners, and the Home Office. These include “improvements to national guidance and training; scrutiny and monitoring of taser use; and data and research”.

The IOPC’s findings are in line with concerns raised by rights organisations including The Children’s Rights Alliance for England, Amnesty UK, and the Omega Research Foundation.

In 2020, the coroner investigating the death of Marc Cole following repeated police tasering warned about the increasing use of the weapon. In spite of evidence of the harm they can cause, the Home Office announced in 2019 that it would spend £10m on arming more police officers with the electronic weapon.

The families of people who have died after being tasered by police spoke out following the IOPC’s report. Some are calling for a ban on the use of taser against people experiencing mental health crises. In 2017, Cornwall police tasered Marc Cole while he was experiencing a mental health crisis. His sister Lisa Cole told the Guardian:

They should immediately ban the repeated and prolonged use of Taser against people clearly exhibiting the symptoms of mental ill health until and if they have robust medical data showing that it is safe.

In 2017, police repeatedly tasered, beat, and sprayed Darren Cumberbatch while he was experiencing a mental health crisis. Although the police’s excessive use of force contributed to his premature death, none of the officers involved have faced disciplinary action. Cumberbatch’s sister said:

We’ve already had numerous shoddy reports and unimplemented recommendations since the Macpherson review. Our families are ending up ruined from fighting for justice against a system built against us.

Time for action and accountability

Calling for accountability for the death of her brother – as well as the deaths of Cumberbatch, Adrian McDonald, and others who have died following police tasering – Lisa Cole said:

Our families urge the IOPC to now look at the key finding patterns in all the cases listed in the deaths and injuries section of the report and to urgently review and robustly reinvestigate all these cases.

In a statement responding to the IOPC’s review, INQUEST director Deborah Coles said:

This review is welcome but the recommendations do not go far enough to create the systemic change needed. Tasers are highly dangerous weapons which have resulted in serious injuries, harm, and deaths. They are increasingly used as a first not last resort.

We don’t just need more scrutiny, community oversight, or training or guidance. We need the IOPC, police chiefs and oversight bodies to hold police officers to account when they abuse their powers and to confront the reality presented by this evidence. We need strong action: stop the further rollout of Tasers to more officers now.

Unfortunately, this report by the IOPC is vague, lacks detail, does not have a substantive evidence base and regrettably ignores extensive pieces of work that are already well underway and, indeed, other areas where improvement could be made.

Only 101 Taser uses over a five year period were reviewed and these were all ones that had been investigated by the IOPC. It is concerning that this only represents 0.1 per cent of all Taser uses in the same period, which totals 94,045.

We are naturally disappointed our 130,000 members were not consulted and this study is based on 0.1 per cent of Taser uses over a five-year period.

But action is needed

Campaigners and families remain steadfast in their calls for institutional change and accountability. Many are urging the state to halt the rollout of more tasers, and instead invest in communities, health and mental health services, and welfare and education to reduce harm at the hands of police.