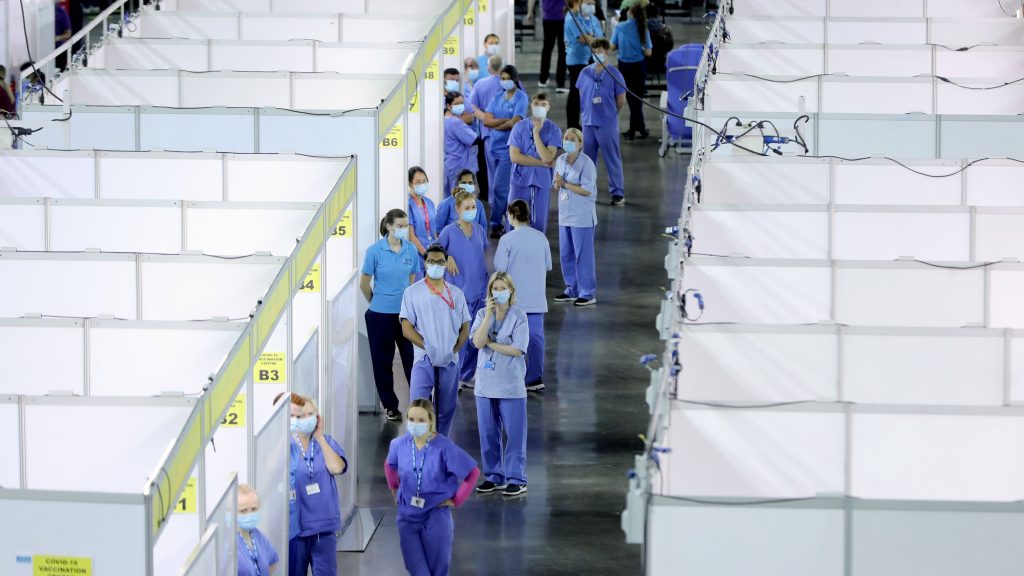 Growing numbers of local areas across the UK are recording their highest rates of new cases of Covid-19 since comparable records began, as the third wave of coronavirus continues to pick up pace across the country, new figures show.

Parts of Scotland, Wales and south-west England are all experiencing case rates higher than at any point since mass testing was first introduced in summer 2020, while areas of the north of Ireland hit a new peak in recent days.

The figures come amid warnings of a further increase in the spread of the virus in coming weeks, with pupils either back at school or soon to return, a bank holiday weekend about to begin in all nations except Scotland, and a busy calendar of sport and music events likely to attract large crowds.

Analysis of the latest data for new cases of Covid-19, compiled by the PA news agency, shows that:

– Mid & East Antrim is the only area in the north of Ireland currently with record case rates (590.9), but Fermanagh & Omagh (1,047.4) and Derry City & Strabane (968.2) currently have the two highest rates in the whole of the UK, and both areas hit a new peak in recent days. The north of Ireland’s overall rate stands at 629.3, the highest since January 5.

England is the only one of the four nations where rates are currently rising slowly rather than sharply, and is some way from hitting the sort of levels seen last month, when case rates peaked at 543.5 on July 19.

All four nations have now experienced a similarly “shaped” third wave, however.

Cases began to rise from the end of May and spiked in July, although on different dates for each nation; this was followed by a partial fall in cases and a levelling off; then came a renewed increase in cases in August.

But unlike the first and second waves of coronavirus cases, the third wave has yet to cause a similarly sharp rise in the number of hospital cases and deaths.

This is a long way below the 39,254 patients who were in hospital at the peak of the second wave on January 18 – the highest for any day since the start of the pandemic.

Meanwhile, the average number of UK deaths reported each day of people who have died within 28 days of testing positive for Covid-19 currently stands at 110.

The relatively low levels of hospital patients and deaths during the third wave so far reflects the impact of the Covid-19 vaccination programme, which has now seen nearly 78% of all people in the UK aged 16 and over fully vaccinated.

A further “significant surge” in new cases of coronavirus is “realistic”, as pupils continue to return to school and large music and sporting events take place, an expert advising the Government has warned.

Professor Ravindra Gupta, a member of the New and Emerging Respiratory Virus Threats Advisory Group, told BBC Radio Four’s World at One earlier this week that the rise is “predictable” and will happen “despite best efforts”, adding:

Of course there is going to be an associated surge in cases, given that the young people in these events are largely going to be unvaccinated.

We know that Delta is far more infectious, it ramps up very quickly. We know the lateral flow devices are not perfect. So we just have to be realistic and say that this is going to lead to a significant surge in infections.

Scotland’s deputy first minister John Swinney has already said the return of Scottish schools earlier this month contributed to a rise in cases.

Most pupils in the rest of the UK will begin returning to school from next week.

Dr Mike Tildesley, a member of the Scientific Pandemic Influenza Group on Modelling (Spi-M) which advises the government, said the true impact on Covid hospital admissions of schools returning in the coming weeks will not be known until around the end of next month.

In the middle of September we might see cases picking up a little bit and it may take a week or two or more for that to spill over into a rise in hospital admissions.

But to me the biggest unknown, and I think it’s very hard for any of us to call this now, is exactly how big that rise is going to be.

Pop-up vaccination clinics will be running at the large Reading and Leeds music festivals this weekend, as part of ongoing efforts to encourage vaccine take-up among young people.

Health officials said they are investigating 4,700 cases of coronavirus which are suspected to be linked to the Boardmasters festival, which took place in Cornwall nearly two weeks ago.

And it has been reported that more than 1,000 people who attended Latitude Festival at Henham Park in Suffolk last month have tested positive for the virus.