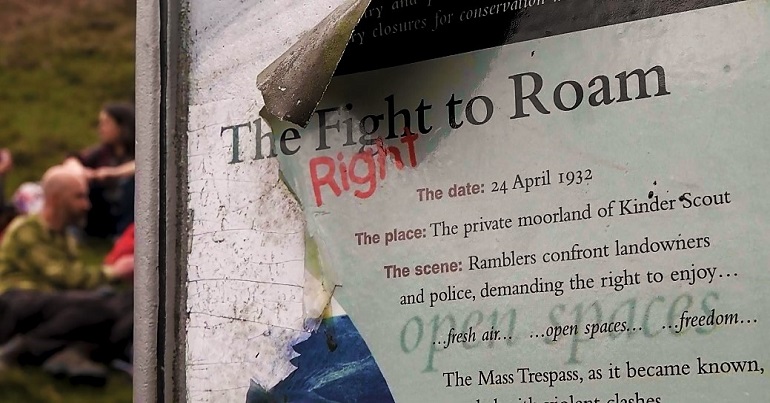 A new documentary is shining a light into one of the most explosive acts of civil disobedience of the 20th century. But far from being consigned to the history books, the event resonates right to this day.

WellRedFilms is based in Sheffield. Former members of political party Left Unity founded it in 2015. The group has made over 30 videos since it started, and it says its aim is to give a voice to those people not normally represented in the mainstream media. And its gritty films and raw production values showcase this. But in a departure from its most recent work, Meltdown, WellRedFilms has now turned its attention to a celebrated act of civil disobedience in the 1930s, and turned it into a visually stunning documentary.

The Canary caught up with producer and chair of WellRedFilms, Alan Story, to discuss the documentary, its inspiration, and whether or not 21st century British society could see such an effective, large-scale protest as the subject of the film: the ‘Kinder Mass Trespass‘.

Mass Trespass explores the events surrounding a 1932 act of civil disobedience by around 400 ramblers. As contributors in the film point out, the early 20th century saw working people start to get scraps of leisure time. The moors and mountains of the Peak District provided an escape from the heavy industrial towns surrounding the region. But access to many of the best spots was in the hands of rich landowners. They could refuse permission to anyone they didn’t like the look of. In practice, this meant the moors were out of bounds to all but the wealthy, who would go there to shoot grouse a few days a year.

After years of limited progress by established ramblers’ groups, some working class people decided to take direct action. It was a protest which saw them walk onto the Kinder Scout private moorland, to highlight the issues surrounding the so-called ‘right to roam’. As the website History at Keele University noted:

Until the late-twentieth century, walkers and climbers in places like the Peak District and Scotland had to put up with being excluded from vast areas of mountains and moorlands, which were ‘protected’ by landowners in the interests of game shooting.

The Mass Trespass was a socially explosive event. It pitted Manchester members of the communist British Workers’ Sports Federation (BWSF) and a group from Sheffield against the landed gentry; essentially the working class against the upper, feudal class: 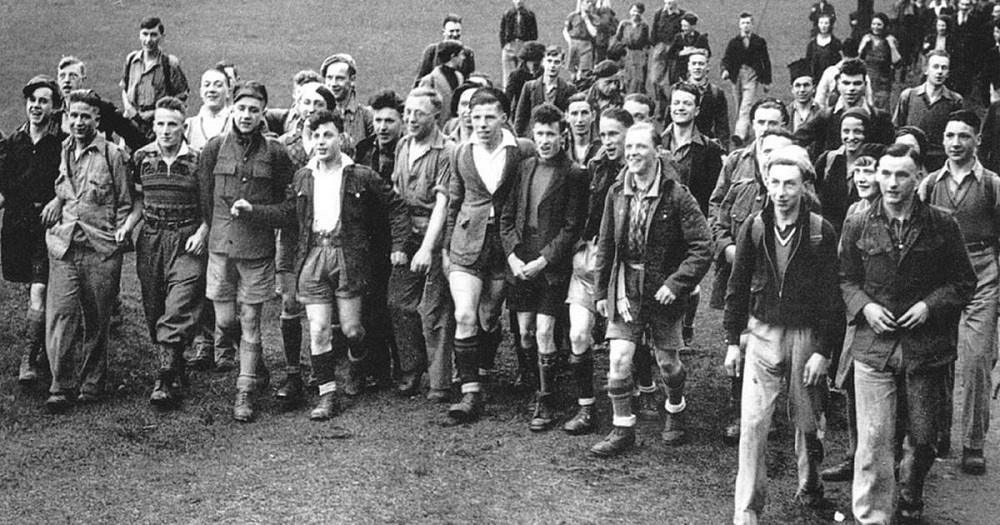 The protest was not unlike modern 21st century movements such as Occupy, in terms of its direct action against the entrenched, structural inequality that exists in society. It is this comparison which Story believes is important. But he also says the story of the Mass Trespass is not one you’ll hear from some of the mainstream media. He told The Canary:

The motivation behind us making Mass Trespass was in one sense probably some of the same reasons that motivated Mike Leigh to make his upcoming film ‘Peterloo’, on the 200th anniversary of the Manchester Massacre of 1818. We can hardly count on the mass media to tell us about such episodes in working-class history or to inspire people to challenge the current oppressive order. Or if the mass media do cover such events, they tend to erase the radical bits.

Making videos such as this is exactly what a radical or alternative video group like WellRed should be doing.

The Mass Trespass was such a significant event that it led broadcaster Stuart Maconie to say it should be taught in schools. While the actual demonstration itself was controversial, it was the after-effects it caused which have lasted to this day. As the Ramblers charity noted:

Today, it’s possible to trace the Kinder Scout trespass as the start of an access movement that saw the establishment of National Parks, long distance footpaths including National Trails and finally, the Countryside and Rights of Way Act 2000 which granted unrestricted access to 10,000 square kilometres of countryside in England and Wales. 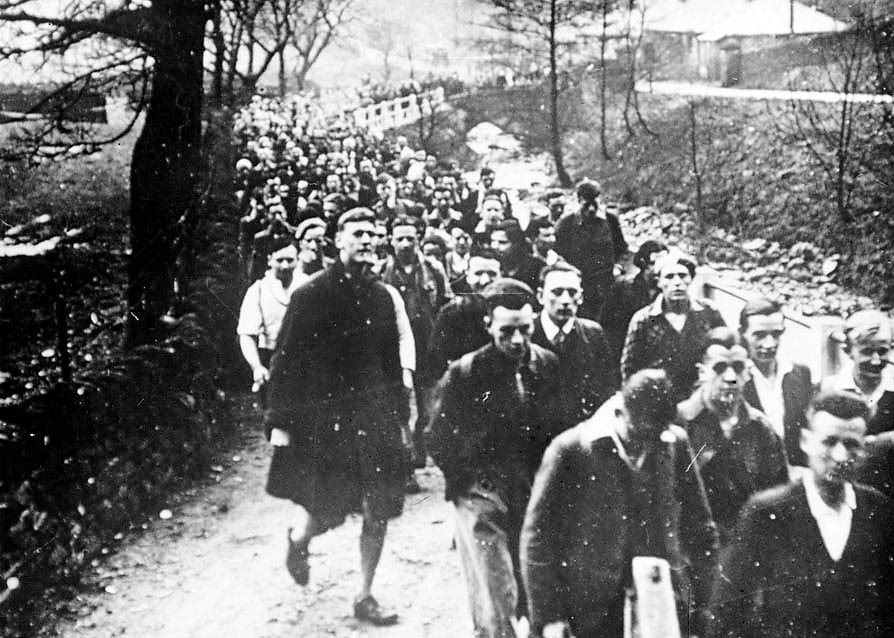 It is this legacy which makes WellRedFilms’ Mass Trespass so pertinent. The film is beautifully shot, mixing historical imagery with rolling drone shots of the modern countryside. Interspersed are interviews with people who have either a direct connection to, or interest in, the trespass. Actor Maxine Peake told The Canary:

This film is a must see. A gem. Informative and inspiring. Lest we forget Benny Rothman [BWSF secretary and leader of the trespass] and the mass trespassers… because of their passion and bravery we have our freedom to roam. Long may they continue to inspire us.

But most surprising of all is the budget WellRedFilms had to shoot Mass Trespass. Story told The Canary:

‘Mass Trespass’ cost WellRedFilms the staggering sum of £350. Can you imagine how much the BBC will spend covering the marriage of Prince Harry and Meghan Markle? Yet, we can confidently say that what Benny Rothman and the 400 others accomplished has been more beneficial to the public good than Harry will accomplish in his lifetime. Today, it is a national and public park enjoyed by millions; then it was a private grouse shooting patch for the pleasure of a bunch of toffs.

At the time of the trespass, the Guardian reported that:

The protesters fought a brief but vigorous hand-to-hand struggle with a number of keepers specially enrolled for the occasion. This they won with ease, and then marched to Ashop Head, where they held a meeting before returning in triumph to Hayfield … There will be plenty of bruises carefully nursed in Gorton and other parts of Manchester tonight.

But there were more than just bruises, as five men were jailed over the protest. As Red Pepper noted, the prison sentences caused “widespread outrage in liberal and left circles”: 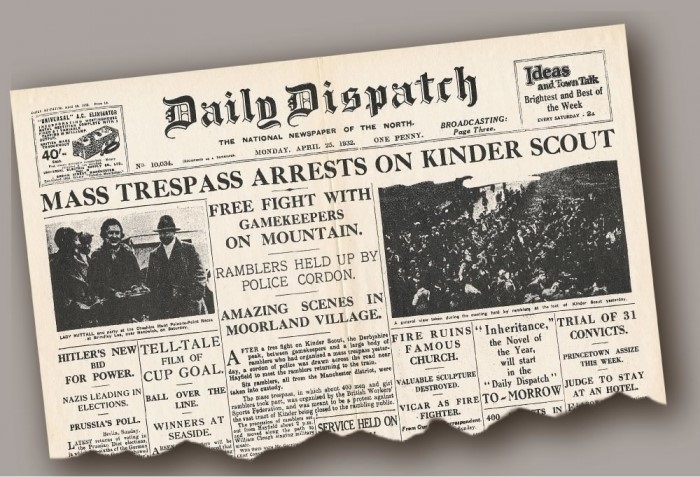 But the trespassers’ defiant act to protect the countryside, and also make a stand against class inequalities, resonates today; not least in the fight against fracking.

As The Canary has documented, there are ongoing protests up and down the country against fracking. At one site in north Yorkshire, campaigners have been prosecuted. At another, campaigners and local councillors have accused police and private security at the site of “disproportionate force” and trying to “provoke violence” – something both groups deny. Police at one point “dragged” Green Party co-leader Jonathan Bartley away from the site.

It is this fight for the countryside, and for class democracy, which is evident in both the trespass and fracking campaigns. Story notes the comparison, telling The Canary:

Of course, the battle against fracking is far from over, but we’ve been inspired by the resistance and persistence of the anti-frackers. Two years ago I was talking to Harry Rothman, the son of Benny Rothman, and I asked him whether he thought his father would be involved in the anti-fracking movement today if he were still alive. ‘Right at the head’, Harry replied in a flash.

What the anti-frackers are doing, or what is also being done by tree campaigners in Sheffield, is to say that the countryside, our environment and nature should not be under the control of private forces. Whether they be the toffs who controlled the moorlands of Derbyshire in the case of the Mass Trespass, or fracking rip-off merchants, or a multinational corporation such as Amey operating under a wretched PFI deal in the case of the street trees in Sheffield.

And still the fight against abuse of the uplands for grouse shooting continues. Once again the campaign involves more ‘reasonable’ voices looking for small gains. But as with the Kinder trespass, a more robust approach seems to be inspiring people. In 2017, some even took to the moors to make their point more physically, although this time, gamekeepers didn’t attack them with sticks.

While the similarities are striking, Story also believes the activists and campaigners of today could learn a lot from the events of 1932:

There are five important points from the Mass Trespass that still resonate today. Persistence and resistance are key. Rely on yourself and your allies and not on the courts. TINA [‘there is no alternative’] ain’t true, even if it appears to be true in some periods. Class-based courts still operate in 2018 as they did in 1932. As Roly Smith says in the film: ‘I could not believe that five young men had been imprisoned just for walking on the moors’.

Finally, those in control of society, whether Derbyshire toffs in 1932 or natural environmental vandals such as fracking companies or Sheffield City Council in this era, have no hesitation in invoking state power, courts, wardens, security guards or police to protect their order.

The Mass Trespass was a watershed moment. Not only did it pave the way for many of the countryside freedoms we enjoy today, but it also set a precedent in terms of direct action. The trespass, and more so the response to the prison sentences for ringleaders, created a groundswell of opinion that led initially to the foundation of National Parks. Fittingly, the first was the Peak District, in 1951. Finally, the Countryside and Rights of Way Act 2000 established a presumption of access to open land across England and Wales.

WellRedFilms’ Mass Trespass gloriously brings the event to life. But it also displays an intimate understanding of the issue then, and its resonance now.