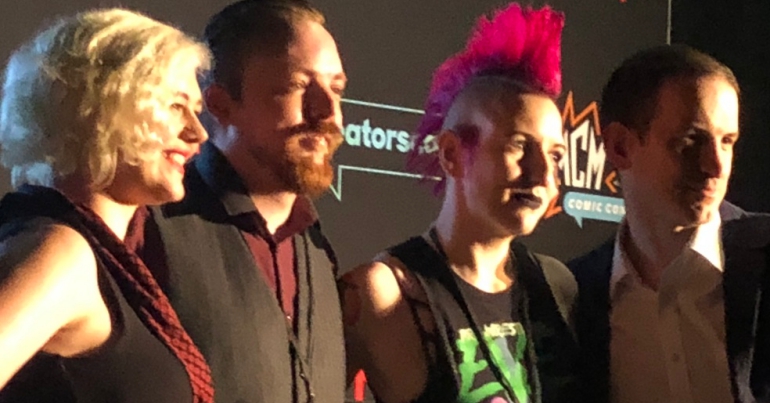 London’s MCM Comicon on 26 May gave a platform to real-life kick-arse women superheroes. It showcased Empowered, a new documentary by Lea Winchcombe about professional women wrestlers.

Following the documentary, Emily Read founder of ‘EVE: Punk, Feminist; Riot Grrrls of Pro Wrestling!’ and pro-wrestler Rhia O’Reilly discussed the film. And they have a clear message for women everywhere – we are “strong and talented” and we can make some noise.

The Canary attended the event.

Founded in 2006, EVE describes itself as a “ground-breaking feminist-punk-rock wrestling promotion” that plays “a major part in the popularity and increased exposure of the female professional wrestling scene”.

But it also challenges assumptions, not just about women, but also about motherhood and women with mental health issues:

Forget everything you thought you knew about this previously male-owned world and see what happens when a bipolar, home schooling mum of two combines her passions of feminism, punk, politics, mental health and pro-wrestling to create EVE, a night of death-defying, jaw dropping, action packed, wrestling stunts fueled with cabaret, comedy and so much more!

This focus on mental health is also reflected in the groups that EVE supports. These include Turn2Me and The 888 Collective – both groups working to support people with mental health issues.

A message for our children

Speaking about EVE, Read said she wanted to empower her daughter:

And it’s obviously worked, as she’s had to give reassurance to her son:

I’m probably one of the only parents who’s had to sit my son down and explain that boys are super strong too.

A message for women

Both Read and O’Reilly are passionate about the benefits of the wrestling world for women. Whether it’s taking part in training or taking up space at their shows. O’Reilly, who teaches classes on a Sunday, explained:

Women come in at the start of the session and then they’re standing tall after two hours. And I don’t care if they want to be a wrestler or not…but if they get confidence from our class or our shows and they take that confidence into the rest of their lives, it’s pretty neat.

Read echoed this, talking about the noise women feel empowered to make when they come to their shows:

Women tell me that they’ve suddenly realised they’ve been taught to stand small and quiet and not make noise.

Both women acknowledge that, while the world of women’s professional wrestling is brilliant, there’s still a long way to go. As Read observed:

There may be a long way to go. But if we continue believing and teaching our children that we are confident, strong, talented women who can make noise and take up space, then the future could be very different.