It was a bad weekend for the BBC, as protesters accused it of 'complicity' in Turkey's invasion of Syria - Canary 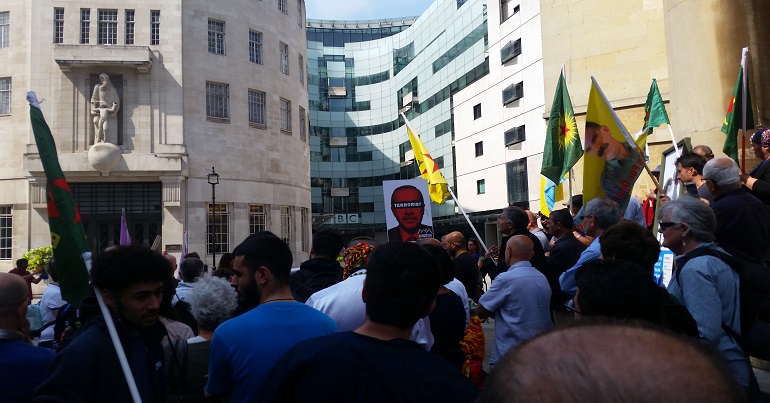 Over a hundred people gathered in front of the BBC building in London on Saturday 26 May. Their aim? To call out British complicity in the Turkish invasion of Afrin in northern Syria.

Specifically, speakers denounced the BBC’s coverage of Turkey’s behaviour towards Kurdish people both at home and abroad. And they said the BBC and the UK government were “complicit” in Turkey’s crimes.

A day of action

The Canary followed the demonstration from start to finish. The author is also a member of the Campaign Against Criminalising Communities (CAMPACC).

This protest was part of a ‘global day of action’ on 26 May. People also marched and demonstrated in Belgium, Germany, Denmark, Sweden, the Basque Country, Norway, Italy, and Afrin (and other northern Syrian cities).

The London demonstration began with a few words from Anna Campbell‘s aunt. Campbell – a UK citizen – was killed earlier this year while volunteering with the all-female Kurdish-led YPJ militia in its fight against Daesh (Isis/Isil) and similar far-right groups in northern Syria. 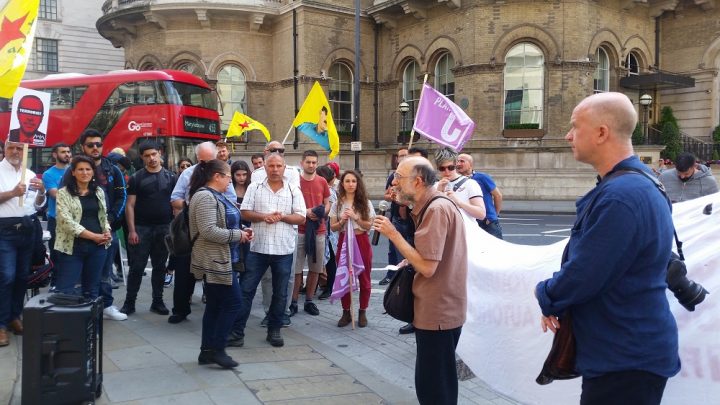 Since a decade ago, the programme on Preventing Violent Extremism has claimed to identify people vulnerable to ‘extremist ideas’ or people creating an environment where such ideas can spread. Extremism is vaguely defined as attitudes contrary to ‘British values’…

This is convenient for stigmatising any political dissent. The ‘Counter-Terrorism Policing’ programme has provided a guidance document on ‘Extremist Symbols and Flags’…

Under the category of “Kurdish groups”, it describes the YPG [one of the main ground forces fighting against Daesh in Syria] as ‘so close to the PKK as to be a subsidiary’, thus implying that the YPG should be likewise banned…

We should demand the repeal of the Terrorism Act 2000 and continue to defy the ban on the PKK.

Since ending peace talks with the Kurdistan Workers’ Party (PKK) in 2015, Turkey has waged war on the group and its allies at home and abroad. It refers to the PKK and its allies as terrorists. The PKK and its allies have condemned all attacks on civilians. But their left-wing ideology includes a desire for self-governance, which centralised states like Turkey oppose.

The protesters outside the BBC called for Britain to remove the PKK from its terrorist list.

As The Canary reported exclusively on 25 May, an official ‘Counter Terrorism Policing’ document in the UK has placed anti-fascists, animal rights activists, and Kurdish groups (including the YPG and PKK) alongside neo-Nazi organisations and right-wing Islamist groups such as Daesh (Isis/Isil).

With cries of '#Turkish state is Isis' and 'UK government #BringAnnaHome!' A group of demonstrators, who are demanding an end to British complicity in the invasion of #Afrin, Northern #Syria, march from the BBC to Marble Arch.https://t.co/NxVPNTwsLk pic.twitter.com/Oc3tRQWl5k 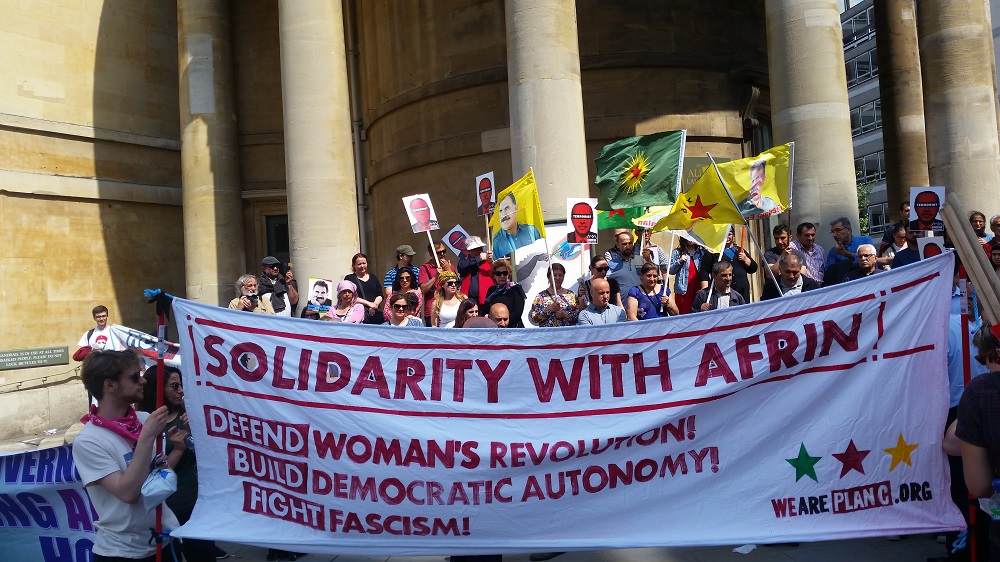 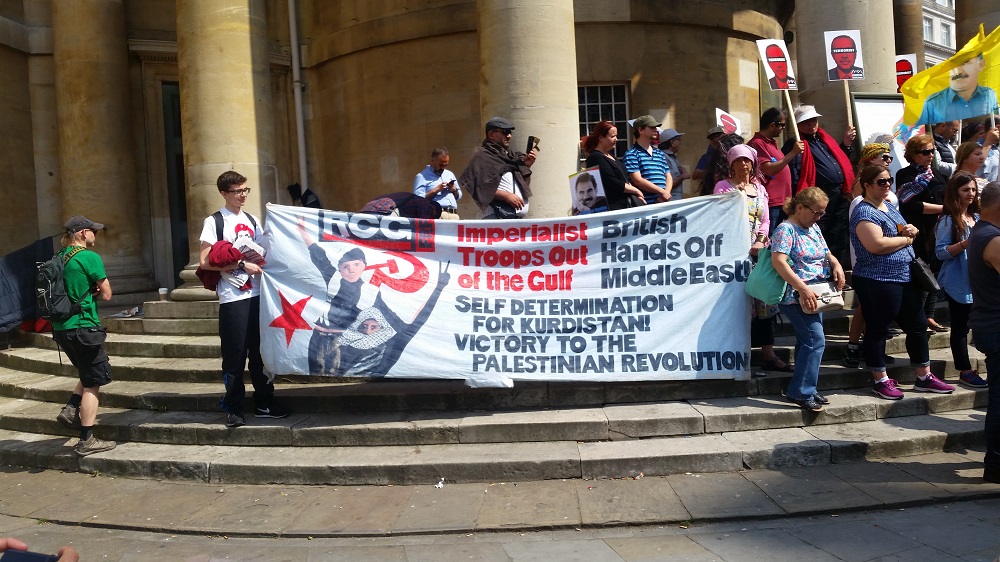 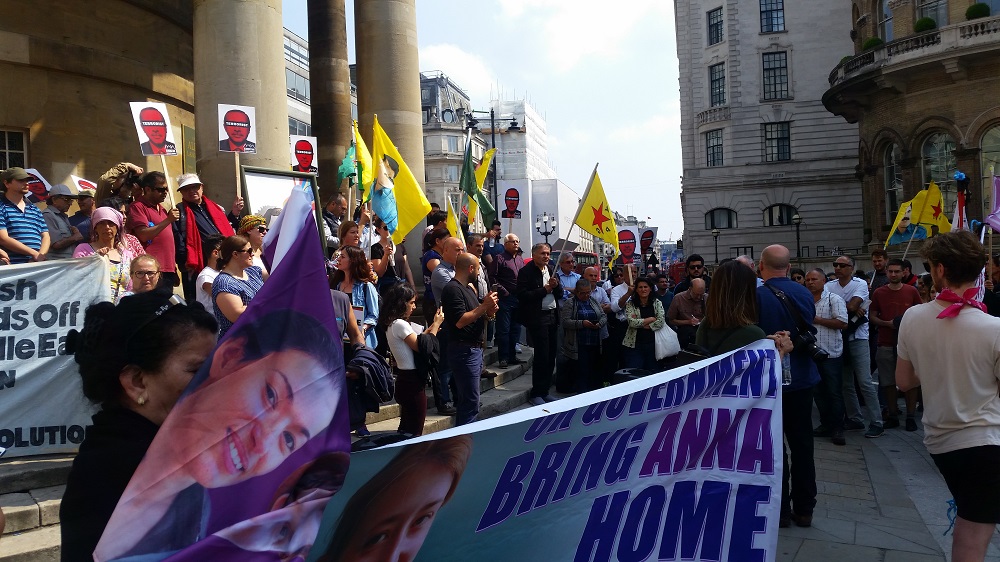 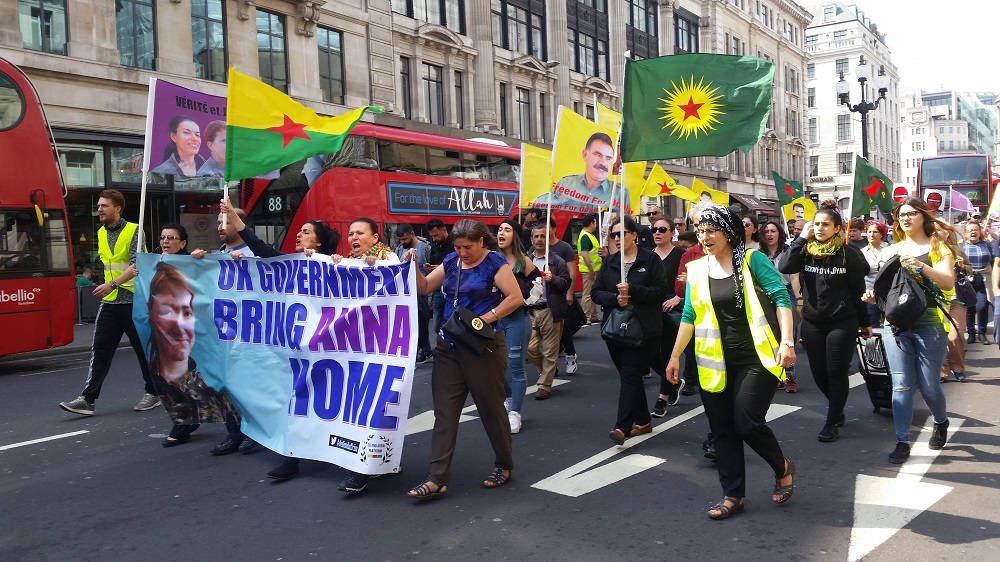 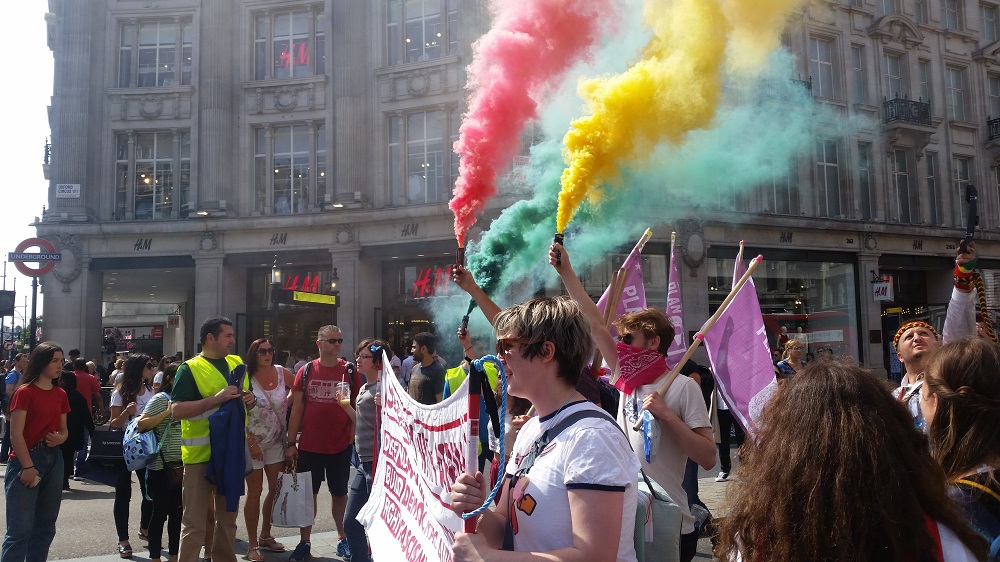 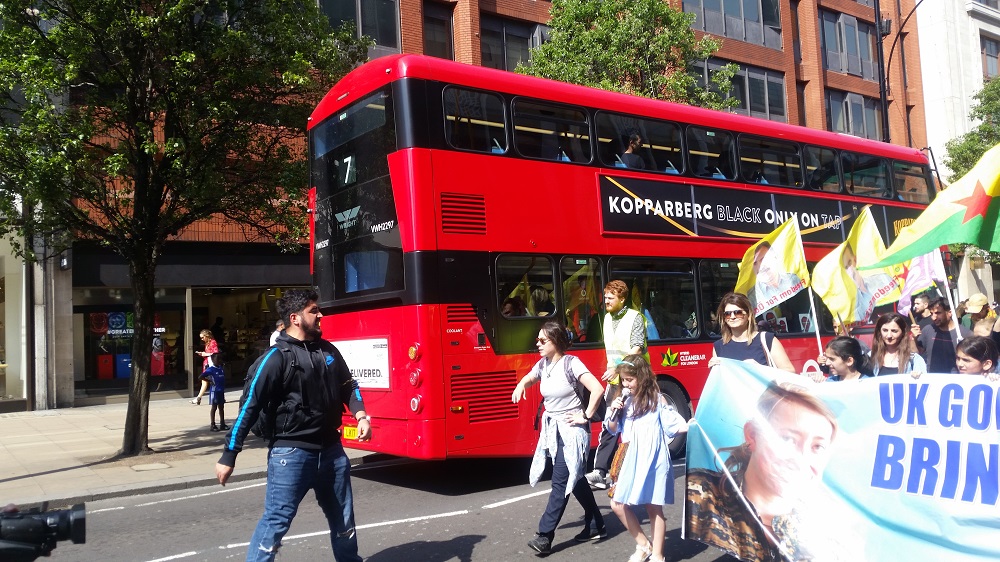 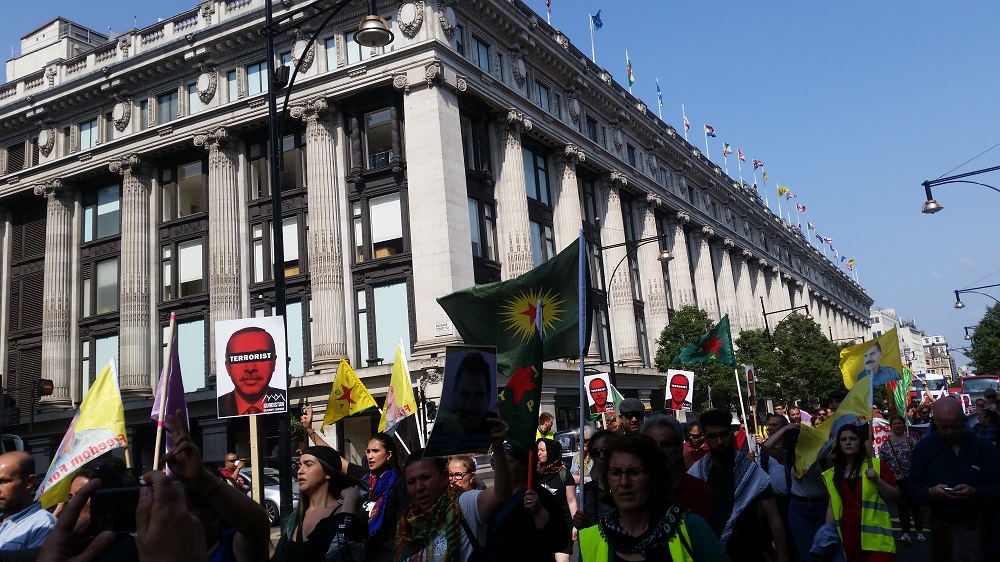 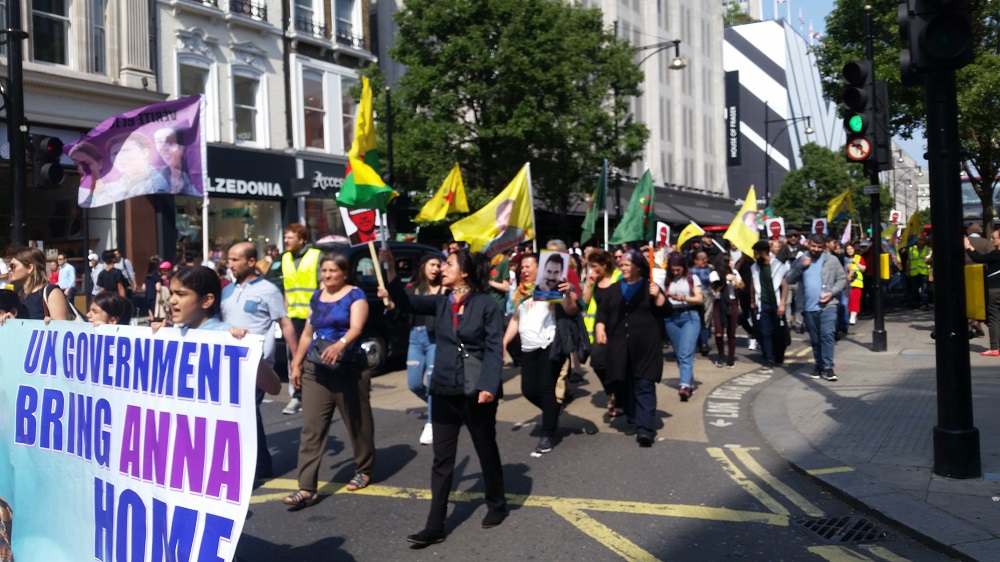 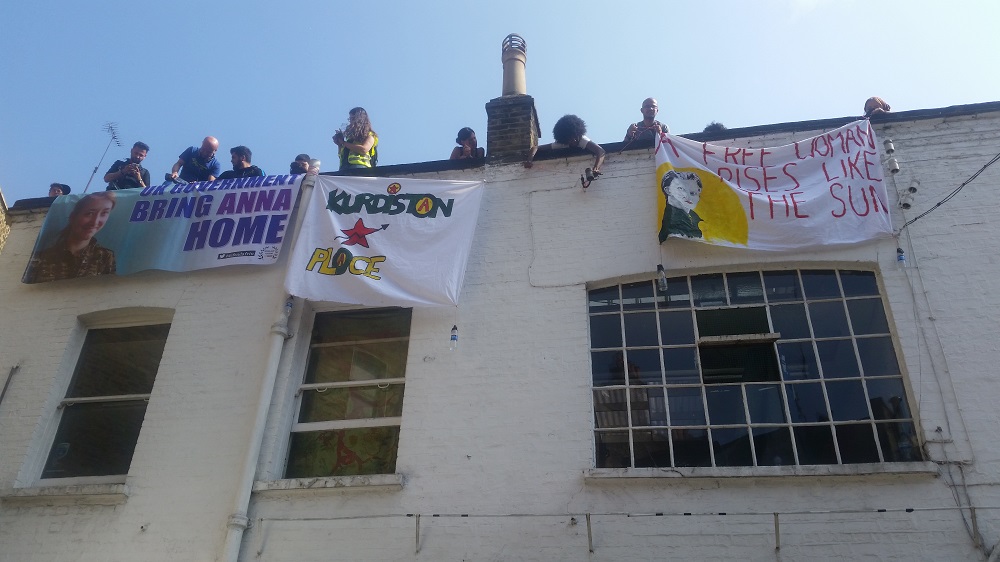 Throughout Europe, there were protests in solidarity with Kurdish people against Turkish attacks:

And back in Britain, it was difficult to ignore the protesters:

Over 100 men and women march from the BBC, (through Oxford street) where speakers called 1) out the terrible reporting of the BBC on the invasion of #Afrin, 2) for the 'de-listing' of the #PKK, 3) expressed solidarity with the people of #Afrin. #BringAnnaHome #ErdoganisISIS pic.twitter.com/s8hGQOXEoN

Occasionally disrupting traffic, the marchers chanted “Turkish state is Isis and Isis is Turkish state”, “wake up Theresa May”, and “YPG is us and we are YPG”.

100+ demonstrators call for the return of the body of a British, #YPJ fighter, calling #Turkey a "terrorist state" allied with "#ISIS". #defendAfrin #BringAnnaHome pic.twitter.com/qTDbKEkrxk

Turkey invaded Afrin, without UN authorisation, in January 2018. It is in an alliance with thousands of members of the ‘Free Syrian Army’, in many cases ex-Daesh fighters and militants from various other Salafi-jihadist groups. Since then, potentially hundreds of thousands of refugees have fled Afrin. Ethnic minorities and women in the area have reportedly been abducted, and homes are being given to people who are not from the city.

The Permanent People’s Tribunal has issued its verdict on Turkey’s actions in recent months and years. It found the Turkish state guilty of anti-Kurdish war crimes and crimes against humanity inside and outside Turkey.

The march on 26 May finished at a newly established social centre set up by Kurdish youth and friends of Anna Campbell.

Scenes from today's London march against Turkish occupation of #Afrin, from the #BBC to #KurdistanPlace in Marble Arch. @KurdsCampaign @Hevallo. More pix at https://t.co/eNaAvX4VsQ pic.twitter.com/677d4hggaQ

The organisers have promised to continue demonstrations such as this one until Turkey withdraws from Afrin.

– Firstly, write to Theresa May and your MP. Ask them to urge Turkey to resume peace talks with its internal opponents, to release all political prisoners, and to withdraw its forces from northern Syria. Until that happens, ask them to cancel and stop approving arms sales to Turkey, and support Campaign Against Arms Trade to help make that happen.

– Join The Canary, so we can keep holding the powerful to account. And see all our previous articles on Turkey here.