The 'Sisterhood' is about to take over the Edinburgh Fringe - Canary 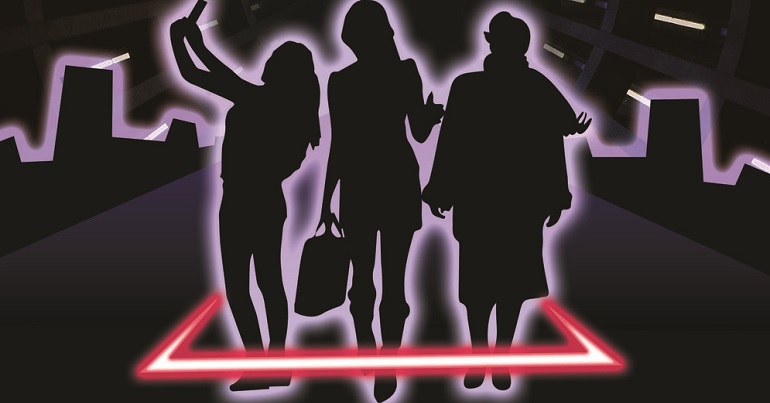 A boundary-breaking new play is set to take the Edinburgh Fringe festival by storm – with the ‘Sisterhood’ taking over the show.

The Edinburgh Fringe: preparing for Sisterhood

Sisterhood is a brand new play from “cutting edge” arts and production company Kriya Arts. It’s a curious piece of drama, telling the stories of three 16th century women waiting to be prosecuted for witchcraft. The play, by Jolie Booth (creator of highly acclaimed one woman show HIP), recently had a two-performance run at the Omnibus theatre in south west London.

Now, the groundbreaking and challenging play (which is currently crowdfunding) is preparing for a run at the Edinburgh Fringe. So The Canary caught up with one of its lead actors, Coco Maertens, and Booth to discuss witches, medical misogyny and the rampant influence of the ‘patriarchy’.

Not your standard fayre

At a first glance, Sisterhood looks like a fairly standard piece of theatre. The initial plot line – three 16th century women, aged 20, 40 and 60, discussing the wrongs of their situation before they’re tried for witch craft – has a ring of Arthur Miller about it. You’d be forgiven for expecting a Crucible-like look at the politics of the infamous witch trials. But Sisterhood is actually a staggeringly inventive piece of performance art.

The title ‘Sisterhood’ was unsettling for Maertens at first. She told The Canary:

The birthing idea of the play is in the name – Sisterhood – which at first I had quite an interesting reaction to. It made me a little uncomfortable. To me, it had connotations of an out-dated group of woman being overtly spiritual or some discredited new age movement. Basically it seemed very uncool. Then I thought about the title ‘Brotherhood’; what connotations that word had, and if I’d rather go to a play with that name. And in all honesty my first impulse was yes. At that point I realised it was really bloody important to do this mad play, with the very implicit name: Sisterhood.

The audience gets to hear the three women’s 16th century stories, and their dissection of issues such as gender, fertility and sexual assault. But at points during the play, each woman metaphorically leaves the setting and delivers a monologue to the audience. Each of these is done under neon light, to reveal tribal markings across each woman’s face: 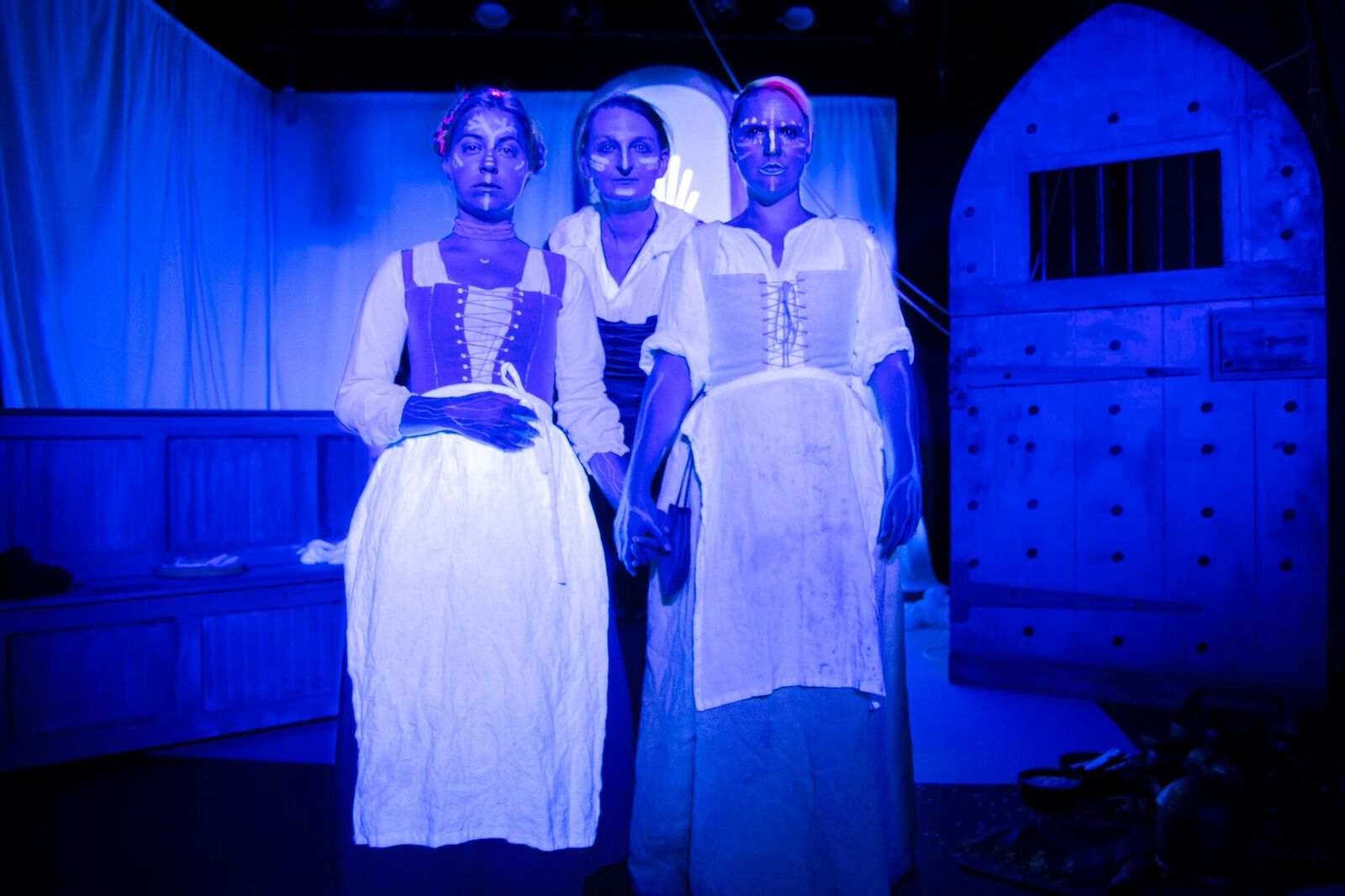 The monologues are based on the actors’ own experiences. According to Maertens:

parallels are drawn between the characters’ stories in the 16th century and the women of today. Their stories influence and speak to each other like echoes of women travelling back and forth through time.

The tribal markings are a very pointed reference to where the idea for Sisterhood came from. Much of the thinking during the creative process was around the idea of feminism being an almost ‘Pagan’ notion. Booth told The Canary Sisterhood was “inspired greatly by Lisa Lister, whose bestseller Witch formed the bedrock for many of the show’s ideas”.

As Kriya Arts describes it the background notes to the play:

The world stands on a precipice, the patriarchy standing watch – flaming torches aloft – threatening to burn the greatest woman of them all… Mumma Earth. Sisterhood is a call to dis-arm the patriarchy through community, to treat ourselves and each other with the respect, grace and honour that Mumma Earth – the divine feminine – requires, because all feminine aspect are facets of SHE.

While this appears to be, as Maertens says, all a bit ‘new-agey’, in fact it’s not. What Sisterhood is saying is that the modern day notion of ‘women’ in our overtly patriarchal society needs to be challenged. And it should be done on a much deeper level than just how feminism has addressed it over the decades. As Maertens told The Canary:

The call for a stronger connection between women, as well as the call to connect to the wild woman in us, the ancient, the deep-rooted old knowledge, is what inspired the play.

Sisterhood explores numerous aspects of being a woman. But it perhaps most pointedly tries to deal with the notion of patriarchy that has been embedded in human society for centuries. It deftly juxtaposes the 16th century women’s challenges with those of today; the purpose being to leave the audience questioning just what can be done to stop the patriarchal march towards environmental disaster, continuing gross inequality and possible third world war.

It can feel unfathomable that very little has changed from the 16th century witch trials to the modern day world, in terms of women’s position (and oppression) within society. But Maertens said that the reality is things aren’t that much different:

Patriarchy isn’t just enforced by men on women. It’s such a deeply ingrained concept in all of us, that women’s behaviour towards each other is as much part of the problem. Women judging each other, playing each other and looking down on each other is as much a problem now as it was in the witch craze, where it was often women accusing other women of these ‘crimes’. Don’t get me wrong. At the end of the day it still plays into this system of male dominance and power control. But my negative association with the word sisterhood is a really good example for the subtle ways we put ourselves and other women down.

She also noted some direct comparisons between 16th century witches and the patriarchy’s treatment of modern day women:

Most of the women that were accused of being witches were actually just wise women who had handed-down knowledge of plants and elements around them; they were actually able to heal while the male dominated ‘scientific’ medicine of the time based on the ‘Four Humours’ often made people only worse. They couldn’t be having that, so accusing them of witchcraft was one very good way of quite literally drowning the competition and executing control. Maybe today, in this country, no one gets murdered for ‘witchcraft’ anymore, but this way of discrediting female skills and power can be found everywhere around us. 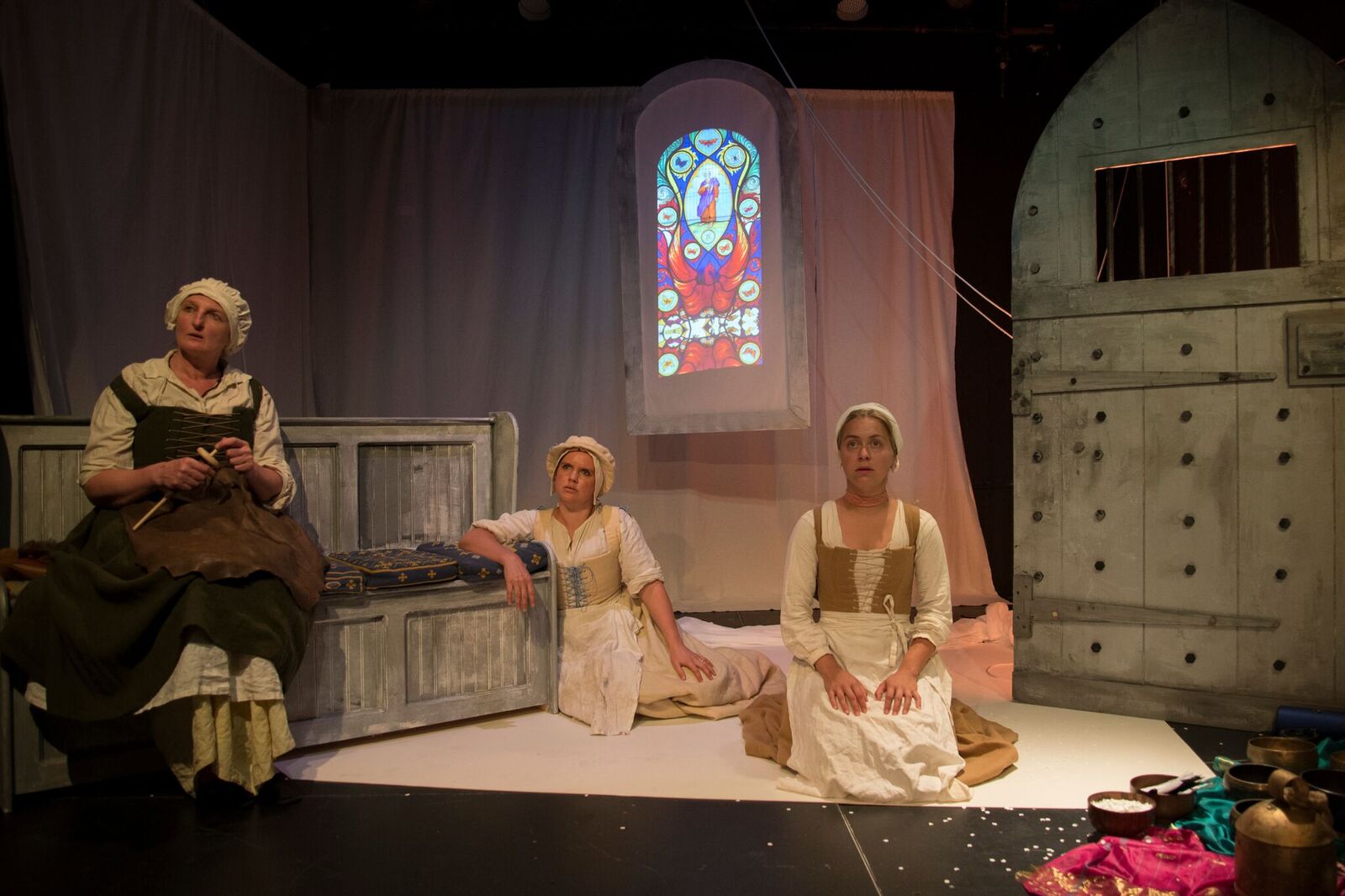 Trans women: welcome to the sisterhood

So, Sisterhood aims to construct bridges that connect periods in history. But ultimately, its goal is to seek answers to how to leave future generations with a legacy fit for the digital age. It comes at a time of mass social change. The internet could be, but isn’t always, positively connecting women. The #MeToo movement sparked mass global debate and outrage. And the issue of gender identity, specifically for trans women, remains at the fore.

This last subject is of particular note in Sisterhood. Booth notes that the play is for “all those who identify as women and revere the feminine aspect”. She told The Canary:

Sisterhood is a call to ALL women… This includes trans-women, because they too are women, but it is also a call to the feminine aspect in men too. The divine feminine is in each and every one of us and she’s waking up and needs some TLC. The masculine will do too once the detox is over, but one thing at a time… In the end it’s about balance, equality and love for EVERYONE.

Maertens agrees with Booth. But then this established actress is used to tackling complex issues in her work. As The Canary previously reported, she starred in the recent production of Beasts by the late Chilean playwright Juan Radrigán. It dealt with issues surrounding social isolation, the taking of a person’s own life, and political and economic upheaval. Maertens told The Canary that challenging work is “brilliant” to be involved in:

Really, I feel like they find me more then I find them! But yeah, I mean how brilliant if I not only get to play a wide variety of rich, layered characters, in brilliant pieces of writing but on top of that they talk about things that I think need talking about. In a way it’s all I could ever hope for. But then I also feel that any human story is worth investigating, that’s what I love about my job, even what at first glance may seem the most boring, straight-laced person has a fucking rich, mad, happy, sad inside to discover, you just gotta dig and get interested.

The sisterhood is coming

Sisterhood fits all those criteria. It is a barrier-destroying production, which through a clever use of dramatic devices and ingenious production, packs an intensive, yet sensitively handled, punch. Maertens hopes that the audience, whatever their gender and sexuality, will:

leave feeling… empowered and connected. And maybe start to question one’s own thoughts when looking at a woman… What is the first thing that goes through our heads when we see a woman that’s not model-shaped, or wears something not to our own taste, or speaks louder than we would allow ourselves? And that can go for men too, why do we think he should man up, or tell a toddler to be a good boy and stop crying?

I just honestly don’t think men and women are as different as the world we live in sells it. So yeah, if the play inspires a little of that thinking I would be thrilled.

It certainly inspires thinking. So, prepare to be challenged, inspired and provoked. Because the sisterhood is coming.

– Donate to the Sisterhood crowdfunder.