A grime artist has his own vision of Black Friday. Hold tight. - Canary 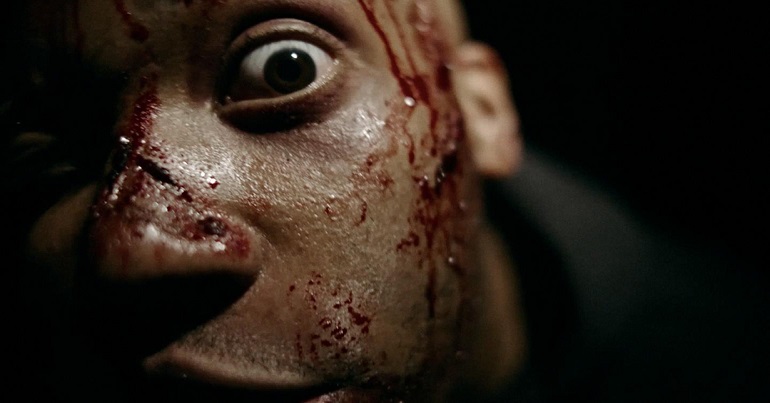 WARNING: THIS ARTICLE CONTAINS CONTENT WHICH MAY UPSET OR OFFEND THE READER

The US shopping bonanza Black Friday gets more and more embedded in the UK as time passes. But this year, there’s another kind of Black Friday going on. Because a grime artist has released the next track in a series of the same name.

No blacks, dogs or Irish

Marci Phonix is a rapper from London. He shot to prominence in April after a debate with Conservative MP Kwasi Kwarteng over the Windrush scandal on Channel 4 News went viral:

After this, Phonix released the anthem Liberties. It was about the institutionalised racism that still exists in the UK and how it feeds into society as a whole. Now, he’s back. And once again Phonix is taking aim at the state of UK society; pulling no punches as he addresses some home truths that will probably leave some people shook. So, The Canary caught up with Phonix, to chat knife crime, the BAME community and Bob Marley.

Black Friday is a series of tracks by Phonix. He is releasing them over several Fridays, and they all feature his trademark no-nonsense style, hard beats and inspired lyrics. Phonix released the first track Black Peter on 26 October. Then, on Friday 23 November the second track Black Friday 2 dropped. But as Phonix told The Canary, the tracks are not to be viewed on their own; he wrote them to “wake everyone up”:

‘Black Friday’ has a consistent theme running throughout the series that challenges a lot of modern-day stereotypes that are swept under the carpet. The lyrics are direct, the beats are hard and it’s nothing but unspoken truths. I feel like all these other rappers do is lie, lie about the cars they drive, the “money” they have, it’s all fake and misleading and I feel like the people need to hear the truth now, people need something real to relate to. Plus, not every black man sells drugs or commits crime… it’s cool to be just… cool.

This is why I will always love Bob Marley’s music, because it was and is just real… The man said if him and his woman never had money, they would share the same bed and eat a cornmeal porridge together! But then I hear these men come ’round here talking about ‘my German & counting my stacks’… get the f*ck out of ‘ere!

The first Black Friday track, Black Peter, deals with some of these issues head-on. In it, Phonix discusses all sorts of stereotypes that exist about the BAME community, but also its own attitudes and beliefs. It’s not for the faint-hearted.

The track itself boasts the swooping bass, aggravated hi-hats and cymbals and synths that Phonix’s grime is known for. But it’s his lyrical delivery and a staggeringly good, if unsettling, video that really make Black Peter stand out:

As does the new track Black Friday 2:

Phonix makes no apology for Black Peter (not that he should). Because some of the truths it contains are barely ever spoken about; even by the BAME community itself. Overall, the track deals with the fact that, in Phonix’s opinion, the BAME community is still playing roles decided by white people. And it doesn’t always even realise it. Phonix says it’s like it hasn’t moved on since the slave trade. He told The Canary:

Firstly, leading BAME figures will not acknowledge the hard truths of this society simply because it puts their careers at risk. Most people are scared to speak up because they want to protect relationships, record deals, brand endorsements, ‘political’ connects, etc. To me doesn’t compare with making a difference for my daughter’s/the next generation. People in general just shy away from the truth everyday in their lives. This is because the truth hurts, and they would rather bury their head underground and ‘play their role’ rather than rocking the boat. ‘Black Friday’ exposes this, we try to speak for those who don’t have a voice.

There is a character in the Alex Haley series ‘Roots’ called ‘Fiddler’. A musician/entertainer by trade, he generally does whatever he’s told to do and convinces the ‘rebellious’ slave Toby to stay in line and not to rock the boat for ‘mas’er’! When you finish with this interview… go through the roster on any major label’s website and see which rap, drill, hip hop or grime artist isn’t playing Fiddler and talking money, hoes or violence… like good little n***az!

It’s this unconscious, modern-day colonial hangover which still affects the BAME community today. But what also holds it back is the continued institutionalised racism that exists in the UK. And you see this not least in the narrative about the current knife crime “epidemic” sweeping London and the country.

An epidemic of racism and classism

As of 10am on 23 November, the capital had seen 123 murders in 2018. Across England and Wales, knife crime has risen in recent years. But the figures historically have always gone up and down. Meanwhile, the murder rate actually peaked under Tony Blair’s government: 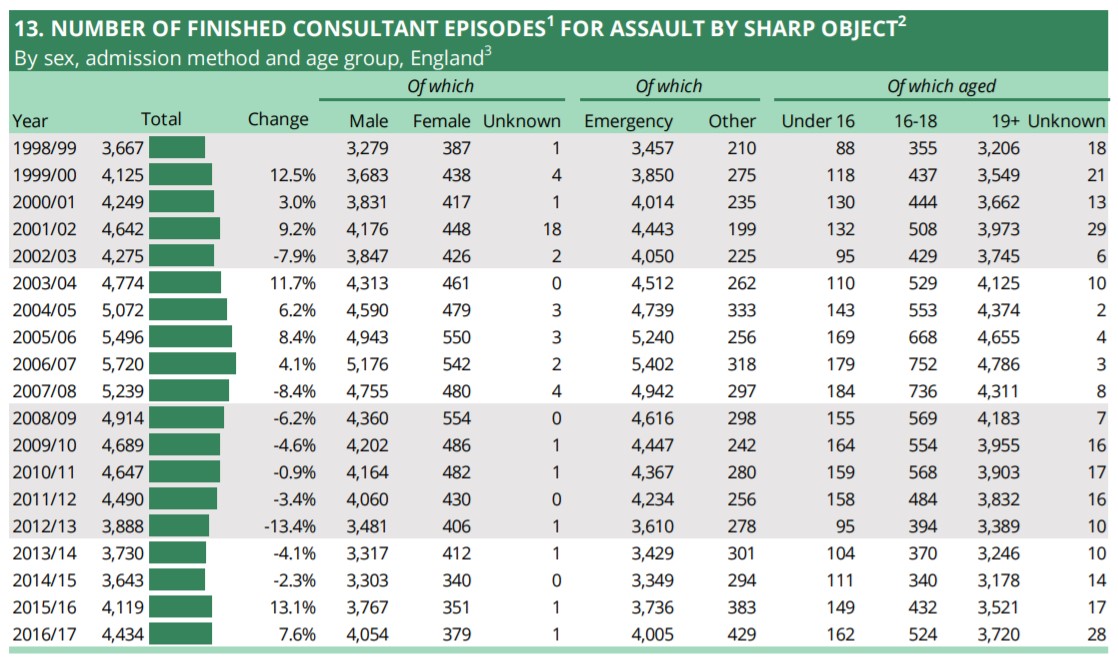 The police are giving a higher percentage of people custodial sentences:

But the number of crimes with a sharp instrument/knife are still on the up: 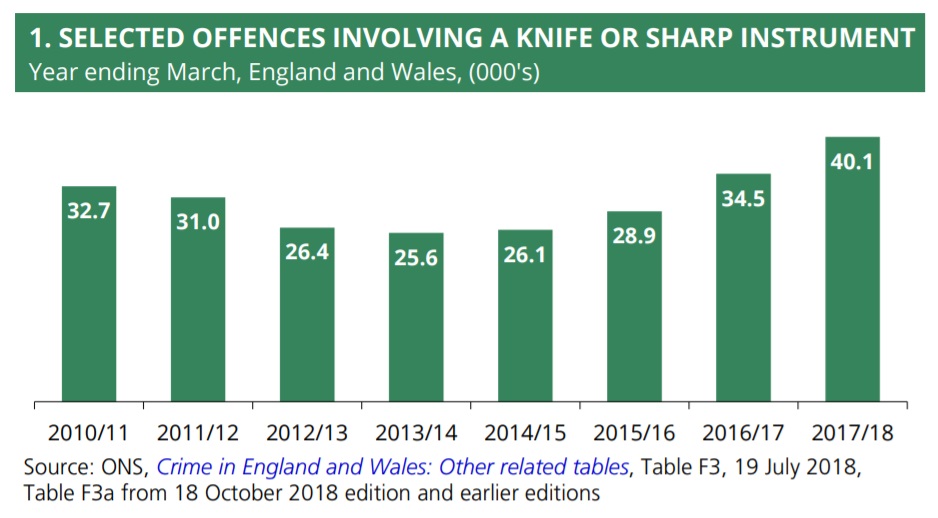 This suggests that the criminal justice approach to knife crime isn’t working.

As The Canary recently reported, drill music is at the centre of the media storm over knife crime and murders. But as artist Drillminister told us, this is basically peddling the same old racist tropes that have been used for years. The reasons for violent crime run much deeper.

Phonix agrees. He told The Canary:

Am I going to say that there isn’t a lot of knife crime incidents amongst the inner city youth of London…. No! There is a lot, in fact way too much! Hence why I got so graphic in #BlackFriday. There’s real horrible things going on in these streets and sometimes extreme issues need to be tackled head on. What I definitely see is that this UK media is very selective in the stories they heavily publicise.

For instance they throw out these obscure statistics out like ‘there’s been a thousand plus stabbings in the UK since the beginning of the year by young teens in predominantly black areas’. So you assume any stabbing going forward fits that criteria. But (God rest their souls) they don’t focus on the likes of 55 year old Hannah Leonard from Camden, David Potter from Tooting aged 50 or Geoffrey Downs, 37 ,who stabbed David Boyle, 44, to death in Southwark! Again they are very selective in what they show us the general public. So I’m not surprised when I’m walking into a tube station and that one white woman on her own clutches her bag and walks quickly down the escalator… She’s been conditioned.

It’s this conditioning which Phonix’s Black Friday series aims to address and hopefully undo. But he’s not alone in the current wave of what is sometimes known as ‘conscious’ music out there at present; music which is busting across genres. Look at roots reggae: from the instant classic, genre-smashing, and soberingly poignant Kontraband by Kabaka Pyramid; to the brooding and unsettling masterpiece A Matter Of Time by Protoje; via the ingenious Man Like I & I X by Natty. Or hip-hop, where the staggering Lowkey is currently smashing it, along with US fusion artist Janelle Monáe. And grime – specifically Phonix – is also blowing up. He believes that music and the arts more broadly have the power to “influence” and create political and social waves. He told The Canary:

I had the privilege of meeting one of my childhood icons earlier this year – Spike Lee. And in conversation he described how he made a film that lead to the arrest and conviction of an individual for a crime that was committed over a decade before! I had always been a believer that the mediums of music and film have the power to influence. But hearing Spike’s story, he just fan the flames in me even more to make music that is honest and transparent.

And he believes many BAME artists are leading this:

Seeing the likes of Dizzee being interviewed by Paxman when Obama got into office and Labour using JME in their last political campaign shows me… music (especially our music) has an influence on mainstream Britain. The likes of Kabaka, Chronixx and Sasco have all invaded my Spotify playlists… the reggae and dancehall sound is definitely my vibe! But over here in the UK there is somewhat of a cultural/generational gap so those guys aren’t necessarily being played by the youngsters out here… I, (and I’m sure) along with a few others on the front line are hoping to bridge that gap!

Phonix is an artist of extremely high calibre and skill. You may find what he does uncomfortable. But that’s the idea – because the world we live in is a very uncomfortable place to be. So many people shy away from actually speaking truth to power. But the musically and lyrically ingenious Phonix isn’t one of them. And as Black Friday shows, some truths are actually better left said.