An 'anarchic exploration' of women, politics and reclaiming the word c**t - Canary 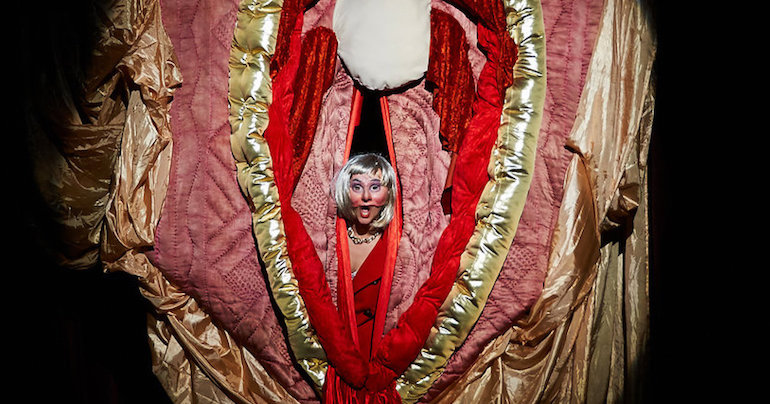 A new comedy sketch show called Queen Cunt Sacred or Profane? is about to go on tour. It’s an “anarchic exploration” that delves “into the wild waters of womanhood”. China Blue Fish and Deborah Antoinette, who wrote and perform in the show, spoke to The Canary about their quest to “tell it how it has never been told before”.

Fish and Antoinette met through a collective of artists and activists called Coexist at the Hamilton House community space in Bristol. Sadly, Coexist was evicted in December 2018, and there’s an ongoing battle to save this space from developers. When they met, Fish says they found “synchronicity in our experiences”. With extensive experience in both clowning and theatre, Antoinette explains, they both felt committed to creating “political art in all its forms”. After a “big long chat about feminism,” Antoinette says they both felt the need to “do something”. They used Fish’s residency at Exeter’s Bike Shed Theatre to “play” and sow the seeds for the show.

Fish was “heavily pregnant” as they explored everything from “ancient witchcraft books” to ways “different female political figures” may have “too much masculine energy”. They created a wealth of material from discussion and improvisation and edited these down until they had “around 14 sketches”. The first show previewed in 2017, to a great audience response. Although both Fish and Antoinette “thought it was hilarious”, it was a huge relief to find that audiences agreed. And now, it’s due to tour nationally.

On comedy and politics

Fish says she’s often felt “a kind of raging within me… a volcanic feeling around what’s going on – both personally and socially – as a woman in the world”. With an activist background, she always felt like this show was “inevitable”. As both explain, the MeToo movement exploded after the first shows, and this gives the new tour added power and poignancy. Because now women around the world are speaking out about some of the key issues the show navigates. “It was relevant anyway,” Antoinette explains, “and became more relevant”.

A bit of an ‘up yours’ to those that might suppress, or the systems that oppress.

Political theatre has the potential to be a really powerful shared experience, almost a ritual. And the idea of making a ritual from a room full of people, well in and of itself, that says ‘we will not blankly follow norms, we will question our limited beliefs’. And at the same time, we can laugh: laugh at ourselves, laugh at the people on stage.

On cunts and queens

It was a brave move to use the word ‘cunt’ in the show title. They explain that certain venues felt uncomfortable booking them, and in some areas, it’s raised complaints. But it’s vital, they explain, that we reclaim this word and shake off its negative connotations. Antoinette explains that after reading about the origins of the word it became important:

The BBC shy away from it so strongly. It’s as if when someone said it suddenly a huge hairy cunt would appear on live television. It’s utterly demonised, and yet the origins of the word mean: sacred, feminine, power and it comes from the same root word as ‘queen’… I think that was the eureka moment… of realising ‘wow, that is just so in tune with what we’re trying to say – especially in relation to the demonisation of women’s sexuality. It resonated and mirrored the themes we wanted to explore… Now I’m shocked when people use the word in a negative way.

I would like all people who see the show to leave the theatre and say, ‘Wow. Cunt’s a great word!’ We should revere them, whether we have them or other people have them – to feel good about themselves and their bodies.

On Women and MeToo

One of the most powerful aspects of this show is that many of the core themes are also experiential: not least through personal experience with sexual assault. Both women also work with projects like Bristol Women’s Voice to make “tangible steps outside the theatre world” to challenge some of the issues that affect too many women. They’re strong advocates for the need to address “the archaic” legal system that still works against so many survivors of sexual or domestic violence.

Since the global spread of the MeToo and TimesUp campaigns, millions of women (and men) have found the courage to admit to experiences of sexual and physical violence. But as Fish and Antoinette say, “there’s still a long way to go”.

“We live in a passive-aggressive society,” Antoinette says. “As women, we’re supposed to be equal… but the actual experience of being a woman is very different.” She continues:

I don’t always feel free to express myself – in the ways that I think men can. How do we possibly respond to a kind of invisible violence – or ignorance – about who we are? It’s not about pointing fingers, but it’s something we can explore through theatre. We can refuse to be silent.

Fish adds, “as white western women, we need to work towards uniting experience, across borders and in solidarity”.

Queen Cunt is groundbreaking in other ways. Some sketches use drag to examine poignant themes. The global phenomenon of Ru Paul’s Drag Race has led to greater awareness, acceptance and understanding of drag queens. But female drag is still a lesser understood art form. The Canary asked them about this and its role in the show.

Antoinette explains that she thinks the US is “way ahead” in terms of acceptance, while the UK often “lags behind”, but she also feels that “perhaps the art form hasn’t been so widely practised and refined by women as men”. So using female drag in a show that explores important issues about the feminine and what it means to be a woman in today’s society is perfect.

To get this show out on the road, Fish and Antoinette secured Arts Council funding. They also partnered with Lunette, who make reusable menstrual cups. Fish explains:

They’re an ethical company working to empower women and end period poverty. So it was a perfect match. And one of the sketches satirises issues around women bleeding.

Period poverty is a rising issue in the UK – too many women and girls simply can’t afford to buy sanitary products. But this is a subject that our society too often shies away from, so it’s “time to ditch the taboo and get talking”.  Working alongside Lunette and its campaign, this is another vital issue that the show tackles head-on.

It’s a breath of fresh air to speak to Antoinette and Fish because reclaiming the word cunt, and raising greater awareness of these vital issues has never been more important. But doing that with a hefty dose of anarchic comedy is the icing on the cake.