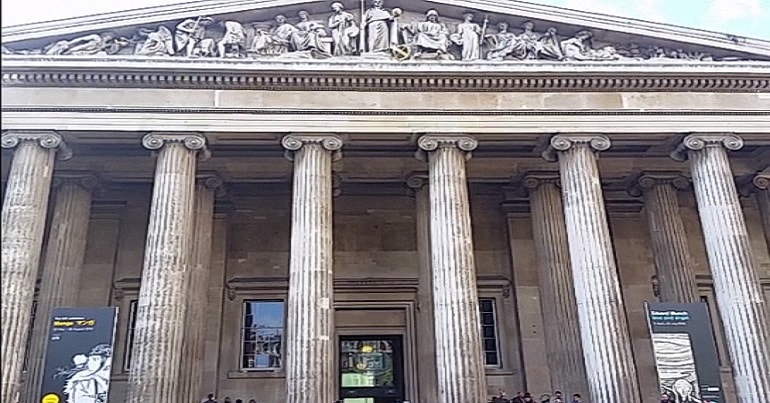 An indigenous-led tour of the British Museum recently called for the return of “stolen” artefacts to their cultures and countries of origin. It also blasted the museum’s links with oil giant BP.

On 4 May, The Canary attended a very powerful and thought-provoking tour organised by performance activists BP or Not BP?, during which hundreds of people listened to speakers from around the world offer an alternative tour of the British Museum. The main speakers were an indigenous Australian, a Palestinian, an Iraqi, and a Greek – each of whom shed light on the more disturbing aspects of the museum’s retention of their heritage.

The main speaker was Rodney Kelly, an indigenous Australian. He told The Canary that he came to: 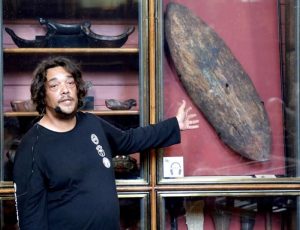 ‘Australia is a racist place’

During Kelly’s presentation in the ‘Enlightenment Room’ where the shield was stored, he explained that:

We had everything stolen – shields, spears. It’s important because Australia is a racist place that didn’t treat us as humans from the start. People need to know the real history of what happened.

Another key theme was the relationship between oil giant BP and the British Museum. Speakers from BP or not BP? told the audience: 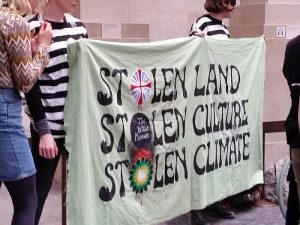 The British Museum’s Director and managers… think that promoting BP in return for 0.5% of the museum’s budget is more important than the lives and livelihoods of people suffering from climate disasters around the world.

According to Iraqi Yasmine Younis, BP’s sponsorship of an exhibit showing artefacts from Iraq and the Levant was all the more perverse given BP’s role in Iraq more recently. Younis, also a member of BP or Not BP?, told the crowd that:

Just a few months before the invasion and occupation of Iraq, BP lobbied the British government to help the company access Iraq’s immense oil reserves. BP called the reserves “Vitally important – more important than anything we’ve seen for a long time.” 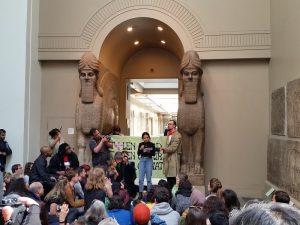 Palestinian musician and activist Samir Eskanda discussed the background to the more than 4,000 Palestinian artefacts in the British Museum. “Many of which”, he said, “were stolen from Palestine by British colonialists”. Samir also said:

Palestinian history and indeed existence has been excavated, appropriated, erased and denied by colonialism, and how the British Museum has played its role in that.

Petros Papadopoulos from RETURN, a campaign group pushing for the return of the Parthanon Marbles (aka the Elgin Marbles) lamented that:

The Parthenon sculptures that have been held in this room, right here, where time has frozen for 200 years, these artefacts cannot be fully appreciated in this situation. How can they, when they’ve been decapitated, in bits and pieces all over the world?

The speakers told the crowd that one of the arguments that the British Museum makes against returning artefacts is that they are banned from doing so by an act of parliament. Therefore, any push to restore these items of cultural heritage to their rightful owners will have to tackle this barrier in order to have any success. We would like to think that colonialism is a thing of the past; but as this tour showed, communities around the world continue to suffer the effects of colonialism to this very day.