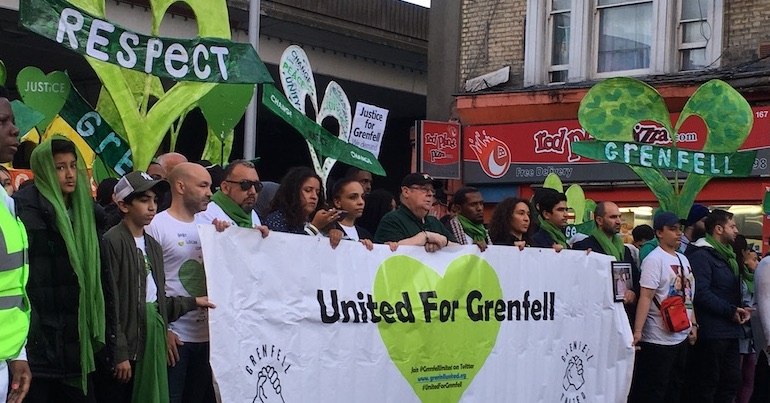 On 14 June 2017, a fire at Grenfell Tower killed 72 people. Two years later, bereaved families and survivors gathered to honour the memory of those lives lost. But after all this time, those same families and survivors still have no answers, and no one’s been held accountable for the tragedy. The Canary met campaigners, family members, and people from the Grenfell community. They told their stories and explained why they are still campaigning for justice. It’s vital that we never forget the Grenfell tragedy.

Zeyad Cred started, and organises, the Grenfell silent walk that takes place on the 14 of every month.

Cred explained that the events of 14 June 2017 created “heartbreaking moments and life-changing events”. He said: “the next two weeks… were manic, very chaotic and there was no chance to even eat”. During this time, “volunteers… survivors and bereaved families” formed Grenfell United, “to look after each other, support the wider community, and to campaign for justice and change”.

Cred explained how, while families were “still looking for loved ones”, the first silent walk happened spontaneously:

We suddenly walked from Ladbroke Grove over to Latimer Road in absolute silence. It was the first time for me, in those two weeks, that I had time to think and… get my head around what was really going on. I felt really empowered by the silence. It was very moving but very scary at the same time. That so many people in anger managed to walk in complete silence and in unity together really showed me how powerful we can be.

Cred spoke to some of the survivors after the first walk. He said:

We decided that we would do this on the 14 of every month. One, to give people the opportunity to come together. And two, to show all the authorities that we stand together and that we will remain together.

For us, as a community, it’s really important to feel the support of people outside. It gives us energy and it helps us deal with the month ahead… It keeps us all together and it keeps us going.

“And we’ll keep going,” Cred said, “until change is made and justice is served”. This justice, he continued:

Is accountability and making sure that Grenfell two doesn’t happen. There are people, individual humans, responsible for the loss of 72 lives. We expect them to be dealt with in the same manner that any other criminals would be dealt with.

“It’s a form of bullying”

A public inquiry into the tragedy is ongoing. But although the first inquiry report “was due this spring”, it’s now been “delayed until October”. Survivors and bereaved families still have no answers and no one has been held accountable. Cred called the whole process “an absolute joke”. He continued:

It’s absolutely heartbreaking and in many ways, it’s a form of bullying. We’re a community broken, trying to pick up the pieces. To quote someone who’s very, very close to the fire and very active in their support, ‘it feels like a long train journey where every few stops someone throws a bucket of faeces over you’.

As he explained, “we didn’t ask for this, we didn’t want to lose anyone and we didn’t want this to rip through our community”. “So,” he continued, “the least they can do is pull their fingers out and make sure that someone is held to account for this”.

Cred also said that accountability for the tragedy runs deep. “It goes,” he said, “from the council, [to] the people who OK’d the building; the people who signed off the cladding”. But it also extends worldwide:

To companies that provide the cladding that was on Grenfell Tower. It’s everywhere, from hospitals to schools, homes.

“Why,” he asked, “do we allow people to go to work or to live in deathtraps”. And he continued:

And that’s what they are. They’re deathtraps. There’s a lack of safety. And it just feels like there’s a lack of genuine concern from the authorities. If you lived the way we lived that night, it’s common sense to make a change immediately. The fact that we’re two years on and still screaming for such a change just shows that it remains profit over people at the moment.

The Canary asked Cred if he thinks the process towards justice would still be the same if the fire had occurred in a wealthier part of Kensington and Chelsea. The borough has the highest level of inequality in London “by a considerable margin”. And the richly multicultural area around “Grenfell Tower is home to some of the poorest people in the country”.

Cred said the response would be “completely different”. He continued:

This borough’s been divided for years and years before Grenfell. We have the north and the south of the borough. The south… tends to be very privileged in financial wealth and we’re [in the north] more privileged in culture and togetherness. So there’s a definite divide.

Cred also explained, “it’s clear to us” that a similar tragedy in the south “wouldn’t have been dealt with in the same way”. Because, he continued:

We wouldn’t be two years on and still waiting.