Professor slams US for causing 'intense hardships' abroad, and media for not holding it to account - Canary 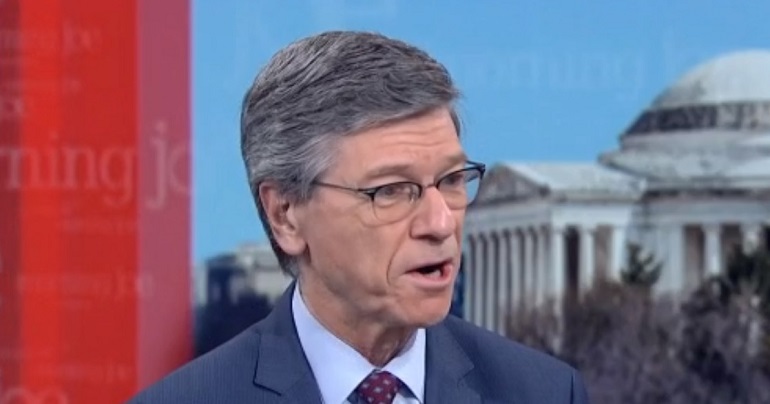 Jeffrey Sachs – director of the Center for Sustainable Development at Columbia University – a long-time critic of US foreign policy. And speaking to The Canary, he slammed devastating US sanctions on countries like Venezuela and Iran. He also shone a light on how mainstream media outlets are failing to hold Washington to account for causing “intense economic hardships” abroad.

Special representative for Iran Brian Hook has claimed that the US does not sanction “medical supplies going to the Iranian people”, agricultural products, or humanitarian aid. Instead, he has claimed that corruption or hoarding is largely to blame. Similar claims are made in the case of the Venezuelan sanctions. But as Sachs told The Canary:

US policies vis-à-vis Iran and Venezuela are cruel and most likely constitute crimes against humanity. They are designed to create intense economic hardships, indeed hunger and deprivation, in order to destabilize the two regimes. This is an old US foreign policy playbook. There is nothing new in it. The claims that food and medical supplies are somehow exempted is a nice fairy tale. The US is doing its best to cut off the foreign exchange earnings of both countries. How are food and medical supplies to be maintained in such conditions?! Civilian suffering, hunger and rising mortality rates are obvious consequences of US policies.

Sachs and Mark Weisbrot, co-director of the Center for Economic and Policy Research, wrote the report Economic Sanctions as Collective Punishment: The Case of Venezuela. It shows that these sanctions severely harmed civilians (especially those in need), exacerbated hunger and a refugee crisis, and led to over 40,000 deaths in 2017-18. Moreover, they violated domestic as well as international law. These findings are particularly relevant as the Trump administration imposes even harsher measures.

Bringing the human toll to public attention and provoking an outcry could affect the approach of the US government. But as Sachs pointed out, that is not the mainstream media’s current approach. He stressed that:

The response to my article with Weisbrot is mainly lack of interest. The US public pays almost no attention to the foreign harms caused by the US Government in Venezuela and Iran. The linkages are subtle and little reported. Congress never debated these issues. In the US media, in any event, [Venezuelan president Nicolás] Maduro and the Iranian regime receive 99% of the blame … or more.

This is not the first time Sachs has spoken out against Washington’s foreign policy, however. He’s made his views very clear, for example, on conflicts in Haiti, Syria, and Iran. He has also challenged the US government’s assertions that its sanctions are targeted and, therefore, not to blame for the human toll. And this is especially significant when the mainstream media presents a one-sided picture faulting mainly the target state for the hardships of the people, thus justifying US sanctions or more. Moreover, Sachs is one of the few voices to criticise the notion of US exceptionalism, a ‘we are above the law’ belief crucial to rationalising US interference in Venezuela, Iran, and Syria (to name just a few recent examples).

As the professor stressed:

I have long been a critic of US foreign policy. My new book A New Foreign Policy (Columbia University Press) describes the need for moving beyond “American exceptionalism” in the design of foreign policy.  Unfortunately, President Trump is mentally unstable, most likely psychopathic, and is capable of causing great harm to others.

The question now is whether there is a real opposition to the Trump administration, an opposition willing to take risks and to challenge the government not just on domestic policy, but also on foreign policy, because of the human toll and on principle. This is what Jeffrey Sachs is doing. And every progressive should take a leaf out of his book.