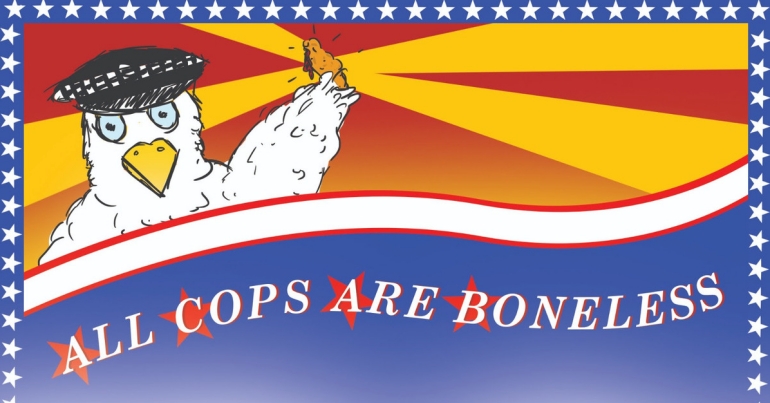 As The Canary previously reported, the home office’s latest attempt to tackle knife crime through chicken boxes was lambasted for “racial profiling”.

Now a group has come up with a genius plan to actually do some good with chicken boxes. But it needs your help to raise the money to do it. Spelling Mistakes Cost Lives is hosting the fundraiser after it was rejected by other sites:

In response to the dumb & racist #knifefree chicken boxes, there's now a fundraiser to print boxes that inform young ppl on their rights when stopped by the cops

Not my project, but I'm hosting the fundraiser as all the main fundraising sites rejected ithttps://t.co/gNyZ9Wwsov

If the gov think they can hold the monopoly on distributing info via chicken shops they are WRONG! Donate to our campaign for Stop & Search takeaway boxes NOW .. https://t.co/gHGe4PEhS5 #stopandsearch #knifefree #chickenbox

“Don’t be a chicken! Know your rights!”

The boxes will have the messages “Don’t be a chicken! Know your rights!” and “All Cops Are Boneless” emblazoned on them. Inside the flap is information about your rights on stop and search. The box states:

Stop and search is racist from top to bottom, and has nothing to do with catching criminals. In 2011 there were 1,205,495 searches. Across the country less than 10% of stops end in arrest, and in London this figure drops to 8%. Many of those are nothing to do with finding anything illegal, but because people choose to disagree with or resist the search.

It then sets out important information, including all the things a police officer should tell you when you’re being stopped and searched. And it also gives the crucial advice of answering “no comment” to any questions that the police ask. There are limited circumstances, such as driving a car, when you need to give information to the police. But general stop and search powers do not give the police power to demand your personal details.

And it explains that:

These measures go against what we know to be effective in combating violence in communities – and are a direct attack on the people who suffer most from knife crime, police violence and discrimination.

Importantly, it points out where the money could be better spent:

The money spent [on] these new measures could have been used investing in our communities, re-opening youth centres, re-opening libraries, funding our schools and healthcare services.

Before it firmly highlights: