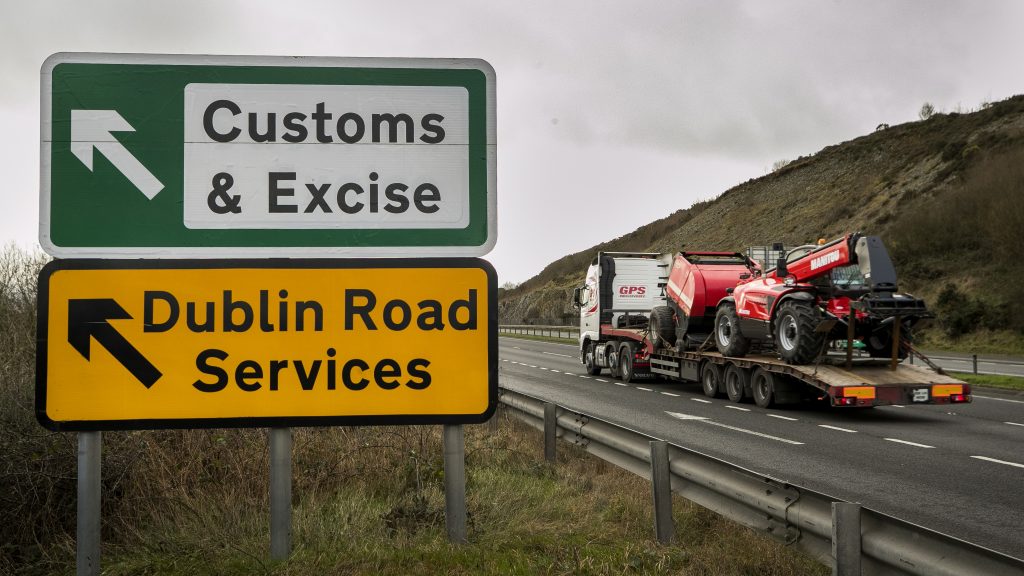 Political leaders in the north of Ireland have clashed over Boris Johnson’s claim that the backstop will damage the peace process.

Sinn Féin accused the prime minister of “rank hypocrisy”, insisting a no-deal Brexit is what could endanger the peace, while the DUP said the EU had to accept that political unionism in the region would not accept the contentious measure.

The Alliance Party accused Johnson of being “reckless and disingenuous”.

The prime minister outlined a number of reasons for his demand for the EU to ditch the backstop in a letter to European Council president Donald Tusk.

One of them was the assertion that it would undermine the Good Friday (Belfast) Agreement of 1998, by weakening the “delicate balance” between the region’s divided communities.

“It is rank hypocrisy for Boris Johnson to claim to be acting in the interests of the peace process, claiming it will be damaged by the backstop,” she said.

“In reality it is Boris Johnson’s reckless pursuit of a no-deal Brexit that is threatening to undermine the peace process.

“Brexit is incompatible with the Good Friday Agreement and the Tories have shown a total and callous disregard to that agreement and to the democratically expressed wishes of the people of the north.

“The fact is that the British Government has agreed to the backstop and Boris Johnson has voted for it himself.

“The EU have made it clear that the backstop is integral to the Withdrawal Agreement and it is necessary to avoid any hardening of the border. It is high time the Tories realised that too.”

The backstop is an insurance policy written into the withdrawal treaty which will ensure, come what may in future trade talks, that the Irish border will remain free-flowing post-Brexit.

It would see the UK, as a whole, enter into a customs union with the EU for an indefinite period and also see the north of Ireland adhere to EU single market rules on goods.

While business and agriculture bodies have been vocal in their support for the backstop, unionist politicians have been vociferous in their opposition, claiming it could undermine the constitutional integrity of the UK by creating economic borders between the north of Ireland and Great Britain.

DUP leader Arlene Foster said the focus should be achieving a deal that was acceptable to both political traditions in the north of Ireland.

“That is what we should be focusing on and that is certainly what I am focusing on – to try to make sure we get a deal that is acceptable to the whole of the United Kingdom and that the backstop is dealt with,” she told BBC Radio Ulster.

Singling out Taoiseach Leo Varadkar’s insistence that the backstop must be maintained, she added: “I am not surprised by the Taoiseach’s reaction. I am almost tempted to say ‘He would say that, wouldn’t he?’.

“But I think the letter that the Prime Minister has sent to President Tusk explains very clearly why the backstop cannot be entered into.

“Apart from, of course, the simple political reality that it has been rejected three times by the House of Commons, it is anti-democratic, it is inconsistent with the sovereignty of the United Kingdom, and, of course, it risks weakening the delicate balance, as is pointed out in the letter, between the parties to the Belfast (Good Friday) Agreement.

“I think that’s very important because, of course, the Belfast Agreement has been used to justify the backstop but, as the prime minister points out, it doesn’t have the support of ourselves – political unionism as we are so-called.

Alliance Party deputy leader Stephen Farry said: “The complete rejection of the backstop by Boris Johnson is reckless and disingenuous.

“There is no prospect of the backstop being removed or renegotiated. His scope to move lies around the political declaration and his current stance amounts to the pursuit of a catastrophic no-deal.

“Even more concerning is the fundamental misreading and narrowing of nature of the Good Friday Agreement.

“The Agreement is about more than the Principle of Consent, it is about preserving the balance of relationships throughout these islands.

“The backstop is not anti-democratic, nor it is something imposed from the outside. It is supported by the majority of people in Northern Ireland on a cross-community basis.

“By contrast, we welcome today’s re-commitment from Donald Tusk to the integrity of the backstop. It is disappointing the UK Government does not have the same understanding as to what is at stake as the EU.”