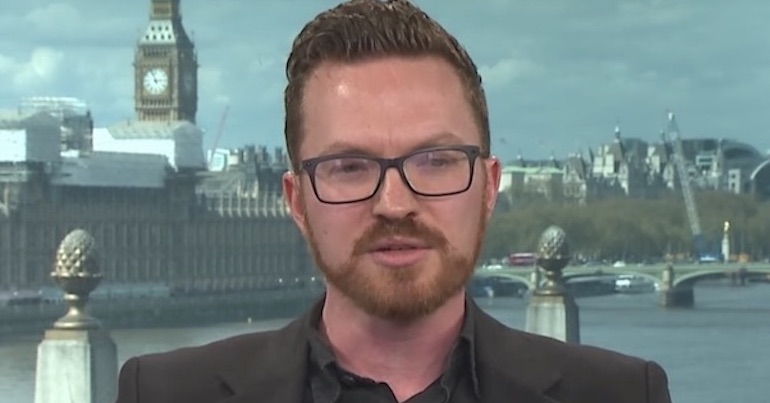 The Labour Party has revoked a leading pro-Palestinian journalist’s press pass for this year’s conference. Asa Winstanley is a powerful and longstanding critic of the Israeli state’s actions in occupied Palestine.

Winstanley has been “a powerful voice speaking up for Palestinian rights” since 2004 and also “worked in the occupied West Bank until 2007”. He’s now associate editor for “the award-winning Palestinian news site” the Electronic Intifada. As such, his work offers a powerful critique of the apartheid Israeli state.

In July, Labour Press approved Winstanley’s application to cover its annual conference in September. Yet he then received a further email stating: “Your application has not been approved”. Winstanley told The Canary:

It’s a sad state of affairs that somebody in the Labour bureaucracy has made the anti-democratic decision to ban me reporting from inside Labour conference. They have not even given a reason for their decision, or had the honesty to admit that this was a revocation of my press pass, and not a failed application. The initial email from Labour Conference Services makes clear that I passed all police checks and vetting by the team.

This amounts to a revocation of an approved press pass without cause, and an undemocratic attack on media freedom…

[It] appears to be part of an ongoing effort by factions within the party’s bureaucracy to silence critics of how it has handled largely bogus accusations of anti-Semitism targeting the left, supporters of Palestinian rights and prominent Black and Jewish members.

Winstanley also told The Canary that “somebody in Labour” has “made a political decision” to revoke his pass. He continued:

This came days after a report by the government funded CST that The Electronic Intifada is ‘the single most popular website’ for reporting on the Labour anti-Semitism witch hunt against supporters of Palestinian rights.

The Community Security Trust (CST) is a charity, initially set up to protect “British Jews from antisemitism and related threats”. On 4 August, it published a report called Engine of Hate: the online networks behind the Labour Party’s antisemitism crisis. This report stated:

the single most popular website for article shares about the subject of antisemitism, the Labour Party and Israel/Palestine was Electronic Intifada, a radical anti-Zionist website which has consistently promoted the idea that allegations of antisemitism in the Labour Party are false, and are part of a smear campaign against Jeremy Corbyn that is orchestrated by the Israeli government.

It also noted that Electronic Intifada “generated nearly four times the online engagement than the Guardian did” in reporting on this issue.

The ongoing row over antisemitism in the Labour Party has led to increased criticism and smears against many pro-Palestinian activists who also support Jeremy Corbyn. And as Winstanley said of this latest situation:

I have reported on Labour conference every year since 2015, and from inside the conference itself in 2016 and 2018. The Israel lobby groups who oppose our reporting never factually refute it, they just smear, attack, defame and censor.

The establishment media is adding to this pattern. In June, an edition of Panorama caused many complaints about accuracy and imbalanced reporting. The CST report followed not long afterwards, and as The Canary reported, the Guardian, for example, didn’t challenge any of its accusations. Many of these were also against Jewish people. In 2011, Winstanley uncovered evidence that suggested:

the CST works behind the scenes with an assertively pro-Israel agenda not stated in its charitable remit. There are also serious questions over the CST’s links to the government of Israel and, allegedly, to its intelligence services.

Asa Winstanley is currently suspended from the Labour Party. Like any member who is suspended, when he was suspended he was informed that suspension means that he cannot attend any Party meetings including Annual Conference. Another Electronic Intifada journalist has been accredited.

Ali Abunimah, the Electronic Intifada‘s co-founder and editor, told The Canary that although he also understands Winstanley can’t attend Labour Party meetings, his application for media accreditation was approved in July. He also pointed out that this was four months after Labour started its investigation, so it was fully aware of the situation. Abunimah continued:

Regardless of his status, he’s not attending conference as a Labour member. He remains a professional, accredited journalist and that’s the capacity he applied to attend in. It’s undemocratic and dangerous for nameless officials to interfere with your work as a journalist. Is Labour saying that it has the power to decide whether or not people can do the jobs that they have in good standing?

It was only after the defamatory CCT report that they denied they had approved his pass in the first place. It stated that Electronic Intifada’s reporting has been the most widely circulated and influential. Yet the CST cannot point to any factual errors, and that is because it’s absolutely solid.