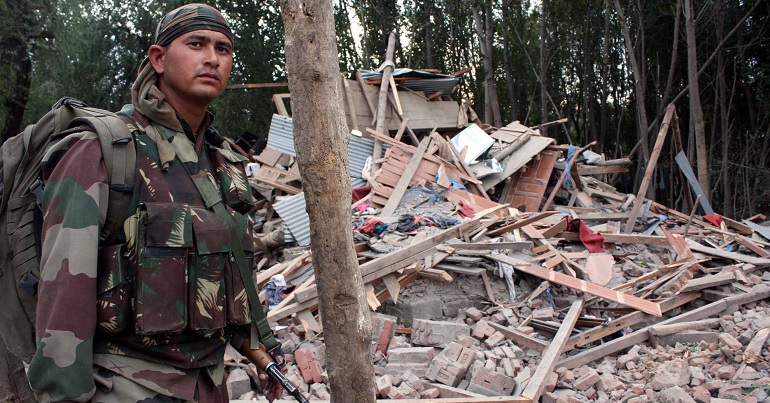 On 6 August, India cancelled key articles in its constitution which until now had granted autonomy to the region of Kashmir. Since then it’s initiated what can only be described as a military crackdown in the disputed territory. Below is a breakdown of the situation as it currently stands.

One of India’s first moves was a communications blackout, blocking internet and telephone access. India has used this as an opportunity to control news going out from the region. Although more recently India has partially restored communications, it has denied that there’s unrest in the region. This is despite the BBC and Reuters sharing video evidence of protests that took place on 9 August.

Many activists, political leaders, and journalists have been detained since 5 August. The move reportedly followed a mass data-gathering exercise on mosques, journalists, activists, and civilians, which India carried out ahead of 5 August.

In the wake of the unrest, Eid celebrations were muted and weddings have been cancelled en masse. On 16 August, worshippers were blocked from entering mosques for Friday prayers. The communications blackout is also reportedly putting patients at risk and blocking access to healthcare.

What does India want?

The dispute over Kashmir originated in the wake of the partition between India and Pakistan in 1947. Since then, the two nations have fought several wars staking their claim over Kashmir.

Most recently, though, India’s revocation of Kashmir’s special status appears to be motivated by Hindu nationalism. India’s ruling party, the BJP, and prime minister Narendra Modi espouse an ideology that places a conservative Hinduism at the centre of India’s national identity. Therefore, that Kashmir’s population is mostly Muslim is not unrelated to India’s ambitions in the region.

In response to the conflict, the BBC published an article asking if Kashmir is “a priority” for British Asians. Of the British Asians interviewed in the article, however, it’s difficult to say how many actually have a connection to Kashmir.

In the midst of this conflict, one thing we can do is listen to and amplify the voices of Kashmiris themselves. We must counter misinformation being put out by the Indian government to whitewash its military crackdown.

Moreover, what’s happening in Kashmir has often been compared to Israel’s occupation of Palestine, especially as Kashmiris must live in what looks increasingly like a police state. Therefore, just as with the Palestinian cause, the international community must respect and support the right of Kashmiris to self-determination. We can do this by joining demos and protests against the Indian government or writing to our MPs, asking them to raise the issue in parliament.

If Kashmir isn’t a priority for people in Britain, maybe we should ask ourselves: why not? What will it take for us to notice that Kashmiris are living under occupation, and that they deserve to finally be free?