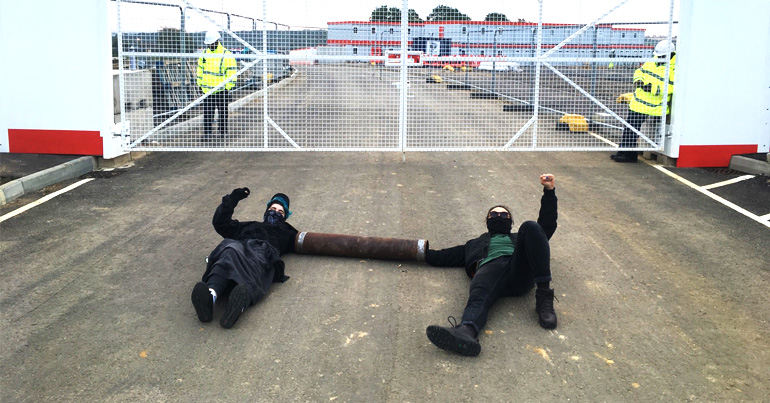 Boris Johnson recently promised to deliver 10,000 new prison spaces. The government plans to reach this goal by expanding old prisons and building new ones. But one group is already taking action to scupper this proposal.

On 16 August, members of Community Action on Prison Expansion (CAPE) brought work at HMP Wellingborough to a standstill. When finished, the prison will contain 1,650 people, leading campaigners to call it a ‘mega-prison’. CAPE said in a press release that:

building new prisons and incarcerating more people does nothing to address the root causes of harm in our communities, it simply sweeps away and isolates those who have been made the collateral damage of the government’s austerity project.

As a result, the group took direct action to slow construction of HMP Wellingborough down. Two people blocked the main entrance for several hours by ‘locking on’ (securing themselves to each other using locks and pipes to make their removal difficult). Meanwhile, other people held banners that said “Build communities not cages” and “No more mega prisons”.

The group said that these two actions are part of a:

Kier is the main contractor at HMP Wellingborough. And CAPE has estimated that Kier will pocket £143m of the prison’s total £253m cost. But the anti-prison group said this money would be better spent on social care, education, and health services in order to tackle the root causes of “harm in our communities”.

CAPE’s action came just days after Boris Johnson pledged to create 10,000 new places in prison. This came as part of a wider ‘law and order’ announcement that included extending stop-and-search powers. Johnson claimed he wanted “the criminals to be afraid” and that he must end “any sense that the law is weak”.

However, criminologist Sharon Hartles pointed out that people don’t commit criminal acts because they’re ‘unafraid’ of the law:

Yet more criminalising of the most vulnerable@BorisJohnson instead of:

Here's a radical idea from one of us "left-wing criminologists"

Invest in tackling the symptoms at the root cause #Poverty #Inequality

CAPE echoed this statement, further pointing out that prisons are also a profit-making sector. Anna, a member of the group, said in a press release:

Companies like Kier pad the pockets of their millionaire shareholders and CEOs by locking up vulnerable people. We want the prison profiteers to drop these contracts which we know will harm communities around the country for generations.

The Canary previously reported on shadow home secretary Diane Abbott’s criticism of Johnson’s plans to extend stop and search. Abbott said it was little more than the Tories wanting to “appear tough” rather than tackling the real causes of harmful behaviour. And the same could be said of Johnson’s desire to expand the prison system.