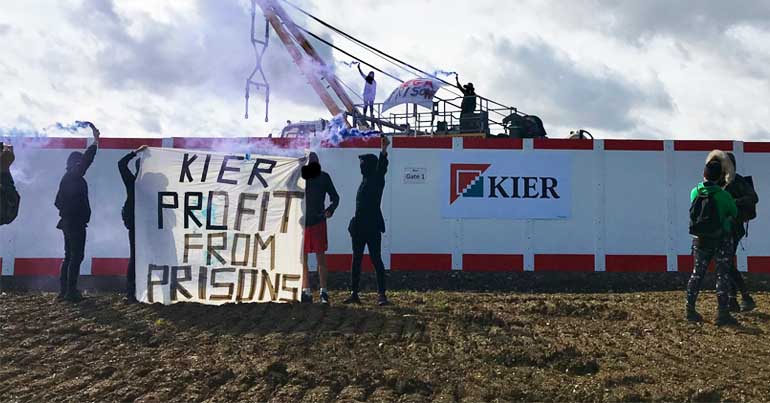 Anti-prison campaigners are fighting the creation of a new ‘mega-prison’ in Wellingborough, Northamptonshire. And yesterday they stepped up their campaign by bringing work to a halt.

On 9 August, members of Community Action on Prison Expansion (CAPE) entered HMP Wellingborough’s building site. They successfully occupied the site and said they shut operations down for six hours. In a press release, CAPE member Caren said the group was protesting the ‘disproportionate harm’ that prisons cause in society:

The construction of a new mega prison will not serve the needs of the Wellingborough community. On the contrary, the project is designed to pad the pockets of private companies like Kier which is contracted to manage construction. And by building 1,600 new spaces to incarcerate people, we know this project will disproportionately harm working-class, BME and disabled people in our already failing prison system.

The group also pointed at money behind HMP Wellingborough, which is expected to cost £253m. This is taxpayer money that the government is handing over to private companies for the building work. As a result, CAPE estimated that struggling construction company Kier will pocket £143m.

There is an ongoing prison ‘crisis’ caused by a shortage of capacity, lack of staff, and underfunding. The government announced in 2017 that new ‘mega-prisons’, which each hold more than 1,000 people, would be key to solving the problem. Then justice secretary Lizz Truss said at the time that such a “significant building programme will not only help create a modern prison estate where wholescale reform can truly take root”. She also claimed it would provide an economic boost to the prisons’ local areas.

However, prison campaigners criticised the plan from the outset. Director of the Prison Reform Trust Peter Dawson, for example, said:

The prison estate certainly needs an overhaul, but reducing demand would mean closing prisons, not opening them.

During its occupation of the HMP Wellingborough building site, CAPE passed out ‘myth-busting’ flyers that tackled other misconceptions about the prison. The press release said these flyers highlighted:

false government promises that new prisons will bring in jobs and economic development. New mega-prisons, including HMP Wellingborough are being built with large factories which contract prison labour. Local companies are incentivized to transition their workforce into the prison facility where incarcerated people are paid as little as £1 a day. This transition threatens local jobs and wages which are made to compete with this exploitive labour scheme.

CAPE also said it would return to the site on 16 August.

The prison system is the centre of many horrors, including a racialised criminal justice system and exploitation of labour. Expanding it would only make these problems worse. Moreover, the building process ultimately hands huge amounts of taxpayer money over to private companies that, in some cases, can’t even keep themselves afloat.