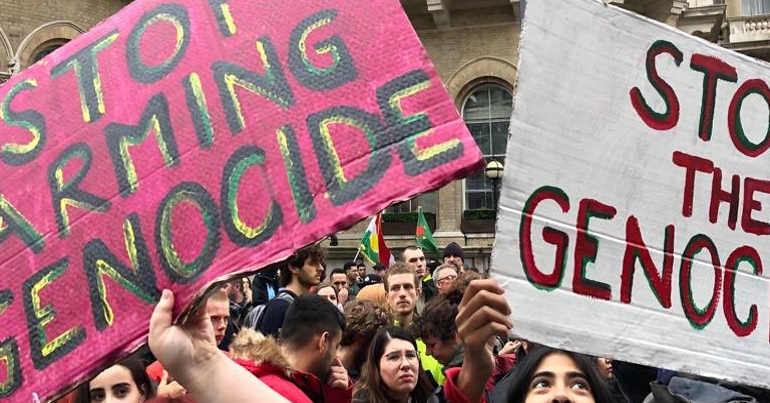 At least 22,000 people took to the streets in London yesterday calling for an end to the Turkish invasion of northern Syria (aka Rojava). The demonstration was part of a growing global display of outrage against Turkish aggression.

Turkey invaded Rojava on 9 October, after Donald Trump promised that the US would not intervene to stop it. Trump’s announcement was a betrayal of the Syrian Democratic Forces (SDF), the Kurdish-led force which has led the ground battle against Daesh (Isis/Isil) in Syria with limited Western support.

The Canary spoke to Nik Matheou of London Kurdistan Solidarity, who said:

In terms of numbers, thousands rallied last week, and yesterday’s demonstration in London was the largest  demonstration in solidarity with the Kurdish struggle since [Kurdistan Worker’s Party co-founder] Abdullah Öcalan was kidnapped and imprisoned in 1998.

The official police figure of the number of demonstrators was 22,000.

We asked Nik what the demands of the demonstrations were, and he answered:

The basic demand for all the demonstrations is a no-fly zone for Rojava. The movement in north-east Syria and the SDF have said that they are not demanding attacks on the Turkish state, but they want a fair fight and they want a no-fly zone.

The next demand is for sanctions on Turkey, particularly arms embargoes, and [Turkey’s] suspension from NATO.

We are also calling for people to boycott Turkey.

Over the weekend of 12/13 October, many demonstrations also took place in Germany, Switzerland, Norway, Denmark, Greece, Australia, France, Greece, and the US.

On Thursday 10 October, a group of activists in Filton (near Bristol) took part in a lock-on action outside BAE Systems. One of the blockaders told Freedom News:

We’re here to protest the arms companies here that have been supplying arms to Turkey who are currently invading Kurdistan in north east Syria. Kurdish people have been on the front line of the fight against Isis. We are now all abandoning them and allowing Turkey to continue with their genocide. It’s about time we stood up and stood by the Kurdish people.

BAE systems have a deal to manufacture fighter jets for the Turkish military.

On Monday 14 October, a group of activists held a demonstration that shut down the Turkish Airlines check-in desk at London’s Heathrow Airport. Their statement reads:

We are in solidarity with the Rojavan revolution, the Kurdish community, the community of Rojava, and those who’ve travelled to be by their side.

Turkey’s current invasion can only be understood as an extension of the ethnic cleansing of the Kurdish people. Turkish airlines are directly linked to the Turkish state and the weapons manufactured that have killed thousands of people and will only kill more in the coming days and weeks. British arms companies and the British government are selling weapons being used to crush a democratic feminist revolution in Rojava.

We call for an immediate end to arms sales to Turkey. We ask those who are getting flights to Turkey and those who use airlines owned by the Turkish state to think about where their money is going, and to reject the position [Turkish leader] Erdogan is taking against the Kurdish people.

Rise Up for Rojava

The global #RiseUpForRojava initiative, meanwhile, has called for mass demonstrations globally on Saturday 19 October. Its website calls on internationalists to:

Organize your self to block, disturb, occupy [the] governments, companies and financial institutions which support Turkish fascism militarily or financially.

“The people of Rojava can hear you, stay in the streets!”

The Canary spoke to Berivan Qereçox, a British internationalist in Rojava. She said:

I want to really emphasise what it means to people here [when people demonstrate]. People I work with in the women’s movement in Rojava are saying really clearly that: ‘we rely on the democratic, revolutionary and anti-patriarchal forces in the world, these are our allies. We might strategically try to get nation states to act a certain way, but we know who our friends are.’

The people of Rojava can hear you, stay in the streets!