A foodbank was vandalised. It now needs our help. - Canary 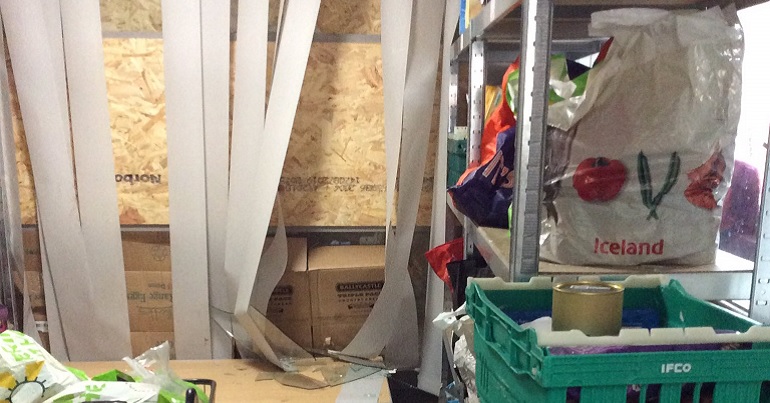 Vandals who have repeatedly attacked a foodbank have left the centre facing closure. So one man is trying to raising funds to protect its future. But the incidents paint a broader picture. Because they suggest the ‘scrounger’ rhetoric of recent years has taken hold.

St Catherine’s Church Centre in Wakefield operates a foodbank. As the Wakefield Express reported, it dealt with around 13 referrals a day in 2018. But since October 2019, it has suffered numerous attacks of vandalism:

We are gutted that our #wakefield #foodbank has again been vandalised. This is the fourth time in the last 6 months and due to the most recent damage we cannot operate safely today and will have to shut the foodbank. Due to senseless vandalism people will go hungry today.

Most recently, the foodbank had to turn people away:

Vandalism to our #wakefield #foodbank. We've had to shut today to deal with the mess. So far we've had to turn away 15 people who will go hungry because of this senseless act. Hundreds of pounds of food will also have to be thrown away. pic.twitter.com/ZQnYjkuuyz

The recent spate of vandalism has had a tremendous negative effect on the running of our food bank. We had to close the service for a full day to undertake cleaning and to secure the building. Due to the contamination caused by broken glass we had to throw away hundreds of pounds of food items which we couldn’t risk distributing.

We also had to turn away over 20 people on the day we were closed as we were unable to provide them with food at that time. Our food bank is a vital life line for adults and children at a time of crisis and great stress. Many of our service users come to us and tell us that they haven’t eaten for days. This is particularly true for parents, as they will often go without meals in order to provide food for their children.

Demand for our food bank is continuing to grow at an alarming rate. In 2017, we distributed 3,576 food parcels. In 2018, we distributed 5,887. And in 2019, we distributed 7,983. These figures do not include the growing number of clients who are visiting us weekly for free evening meals (run twice per week) during which we provide on average 35 free hot dinners per week.

But now, someone has come to the foodbank’s aid:

One of our wonderful supporters has set up a justgiving campaign to help us to repair the damage to our #wakefield #foodbank following the latest incident of vandalism. We would be so grateful for any donation to help us to continue to run this service.https://t.co/Dm4lSfrVwv

Joshua Brandwood is raising money for the foodbank. He’s trying to make sure it can keep its doors open. But he’s not just asking for money. He’s also doing a 20k run on 8 February to raise the much-needed cash.

After reading reports in both the local and national press, I felt compelled to help. I have a lot of family in Yorkshire and I’ve personally fallen on hard times in the past and relied on support from others. As a Lancastrian, I would like to reach out to my Yorkshire neighbours. I find this sad incident an opportunity to give something back. Falling on hard times can happen to anybody, so it’s important these vital organisations are supported in any way possible.

Now more than ever during times of austerity, it is vital communities help one and other. It’s cliché, but together we can make a greater difference to the lives of others.

The fundraiser has delighted Grant. She told The Canary:

The money that Joshua is raising for us is incredible. It will help us to make the necessary repairs to the building and also go towards putting in place some further security measures to deter further acts of mindless vandalism.

We started the week feeling very saddened and discouraged and questioning whether we could go on providing this service. Now, we are very much determined to continue with the help and support we have from our community.

If you wish to donate to his fundraising, you can find more details here. Also, if you have any information about the vandalism, you can report it to the Wakefield Central Neighbourhood Policing Team. Just call 101 referencing police crime number 13200019324.

The attacks on the foodbank, however, are endemic of a wider problem in UK society. Recently, someone stabbed four homeless people in Manchester. Hate crimes against disabled people rose by just under 12% in 2018-19. St Catherine’s foodbank, meanwhile, is not the first to be vandalised. And it probably won’t be the last.

The “scrounger” rhetoric which dominated government and media narratives during the last decade has real world effects. We now live in a society where people needing support in difficult times are often viewed like the ‘undeserving poor‘ used to be. And repeated attacks on foodbanks are the thin end of this dangerous wedge. Moreover, the rise of foodbanks and poverty in the UK is seen by many as a political choice: the Tories choosing austerity over millions of people’s wellbeing. But it’s comforting to know people like Brandwood are there to help. So please, donate if you can.