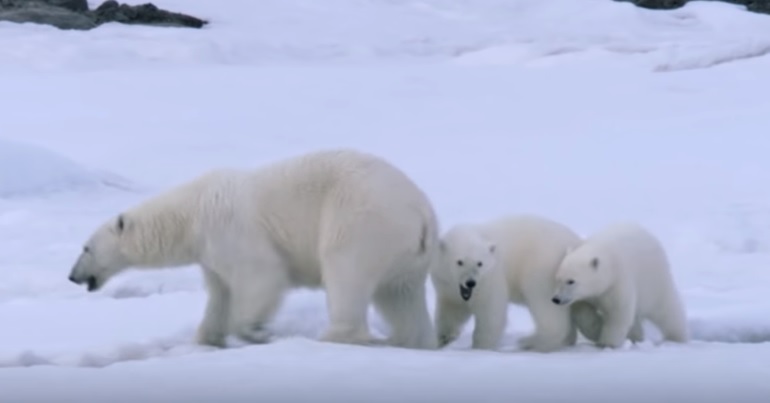 Polar bears have become a gut-wrenching symbol of the breakdown of our planet. But the climate crisis isn’t the only major threat they face. Speaking at a recent event in parliament, Norwegian conservationist Ole Liodden pointed out that something else is killing about 800 to 1,000 polar bears a year and yet no-one’s even talking about it.

The Campaign to Ban Trophy Hunting (CBTH) organised the event in parliament on 22 January. The UK government is currently holding a public consultation into whether to prohibit the import of ‘trophies’ into the country. The practice of killing animals for fun – including endangered species – is increasingly popular with UK hunters.

Liodden, who is a conservationist, photographer, author and expedition leader, also spoke at the event. He began:

I think most of you know that polar bears have a problem with climate change. The ice is decreasing and their habitat is decreasing. Especially where I’m working in Svalbard, 52% of the ice is gone.

In 2017, the severity of the problem polar bears have with climate change was illustrated by a devastating video and photographs of a starving polar bear in the Canadian Arctic. One of those who documented the emaciated, weak, and heartbreaking state of the animal explained:

I can’t say that this bear was starving because of climate change, but I do know that polar bears rely on a platform of sea ice from which to hunt. A fast-warming Arctic means that sea ice is disappearing for increasingly longer periods of time each year. That means many more bears will get stranded on land, where they can’t pursue the seals, walruses, and whales that are their prey and where they will slowly starve to death.

But, as Liodden detailed, polar bears face another threat. And, as with the climate crisis, it’s human-induced:

Liodden began a project called Polar Bears and Humans in 2016 which investigates polar bear hunting. At the event, the conservationist explained that there are currently between “20,000 to 25,000 polar bears left in the Arctic, in the wild”. Yet people are killing them at a rate of about 800-1,000 per year.

The present estimated global polar bear population of between approximately 20,000-30,000 is not dissimilar to that of other iconic animals. Some estimates put the population of remaining wild lions at only 15,000. Meanwhile, rhino populations worldwide stood at just over 27,000 in 2019. But Liodden says people are killing polar bears at a rate faster than that of rhinos:

He also explained that the causes of polar bear deaths differ somewhat to animals in Africa:

With the rhinos it’s a big battle against poaching and with illegal activity. But in the Arctic, it’s labelled as sustainable and subsistence hunting. And we have to do something about it.

As Liodden highlights, one major threat to African wildlife is poaching, which currently isn’t a major issue in the Arctic. However, all the aforementioned animals are targets for trophy hunting.

Hunting comes in a number of forms. Subsistence hunting is where people kill animals for food and clothing. In the Arctic, Liodden believes this can be practised sustainably. It’s commercial hunting – such as trophy hunting and for the commercial fur trade – that he takes issue with.

Trophy hunting is a very controversial practice, especially in a world of dramatically declining biodiversity. In the court of public opinion in the UK, it has no place in a civilised world. Among many conservationists and experts it is morally indefensible and a threat to conservation. They also say there are non-lethal alternatives to hunting, such as photo-tourism and conservation-compatible agriculture, that are ripe for development and can provide income for communities that have to co-exist with currently trophy-hunted animals.

But a number of conservationists argue for its continuation. They say that “well managed trophy hunting” provides funds for local communities and conservation, and stops the removal of wild animals for land conversion to agriculture and other uses. They also invariably question whether the alternatives to hunting are currently viable.

It costs about $47,000 to do a trophy hunt. And you might think this is great news for the Inuit settlements. It sounds like big money. But only 52% on average is actually ending in the local settlements.

If you’re looking at the statistics, between 1980 and 2009, 23 of 25 Inuit [settlements] were engaged in trophy hunting. But after 2009, only eight are left. Why have 17 settlements quit this business if it’s so important?

The conservationist said that only three of the eight remaining settlements that engage in trophy hunting earn more than five per cent of their total income from it. Meanwhile, he gave an example of what’s possible through communities taking up non-lethal alternatives:

Just look at the neighbour settlement in Alaska, it’s called Kaktovik. With 300 people, there are five boat operators doing polar bear viewing for photographers and tourists. They have a two month season and two small hotels. In these two months, they are earning $1.5m which is 70% more than all polar bear trophy hunting in the world.

Liodden further explained that the hunting of polar bears is often for their skins:

The main problem is the increasing demand. More people, more wealthy people, want the luxury of polar bear skins in their rooms. In Norway, it costs about $20,000 for a polar bear skin. In China, it’s now up to $78,000. That’s about the same price as one kilo of rhino horn or two and a half kilos of cocaine. And this is a trigger for the illegal organisations who already have business in Africa, I’m afraid they will soon also start in the Arctic.

Canada, which almost two-thirds of the remaining polar bears call home, is where most of the hunting happens. In 2019, Samuel Iverson, head of the polar bear management unit for the Canadian Wildlife Service, insisted to National Geographic that the country’s hunting quota “is not endangering polar bears”. Iverson said that assessments happen and quotas are adjusted “if in a given subpopulation there’s a concern”.

But Liodden doesn’t agree. He told the event that:

trophy hunters are targeting the biggest, healthiest and strongest animals. This is reverse selection. It is survival of the smallest, sickest and the less physically fit animals.

[The polar bear is] naturally rare. It has a very low survival rate, sometimes less than 50%. It also has a low reproduction rate. And it’s also struggling with climate change.

Given the combination of all these factors, Liodden says polar bears are “the least suitable animal in the Arctic for trophy hunting”.

A model for the future

Norway’s Svalbard, where Liodden works, doesn’t allow the hunting of polar bears. Its population of the magnificent animal is stable. That’s despite the fact polar bears there have had to grapple with the loss of over 50% of the archipelago’s ice since the 1980s.

As National Geographic reported, he believes Svalbard is a “a model for the future”. He says ending trophy hunting of polar bears and the commercial skin trade is “the only way the polar bears have a chance in the warming future”.