The Department for Work and Pensions (DWP) gets more dystopian by the day. After The Canary exposed a fresh scandal with disability benefits, another storm is brewing. This time, it involves Jobcentre staff allegedly ‘trolling’ an independent welfare-focused news site.

The DWP: trolling away

Charlotte Hughes runs The Poor Side of Life. It details the real-life stories of social-security claimants in Ashton-under-Lyne. Hughes’s frank and raw writing has earned her a large number of social-media followers. But now, she claims DWP staff have been “trolling” the comments on her website.

Oh dear it appears that the DWP have nothing better than to do except to attempt to troll my blog.
Take not you'll be deleted and blocked. We aren't lying you are.

Comments on my blog are now disabled until the DWP calm the hell down and stop telling people that work can cure you of all illnesses and suchlike. They aren't fooling anyone except themselves.

Even Universal Credit chief Neil Couling has had something to say to Hughes on Twitter:

When I asked the office we could find no evidence of this happening. As the manager pointed out there is no scope under the legislation to sanction for carrying a food parcel. If Charlotte has any details of this case I’d be very happy to follow up but we drew a blank

This week the DWP have taken it upon themselves to attempt to troll my blog, call me a liar and are telling people that Jobcentres are wonderful places and work will cure us of all ills.

I won’t tolerate their bullying anywhere so comments are blocked for now until they calm the hell down.

Hughes gave the alleged DWP comment to The Canary. She believes that, due to the tone and language used, it may be a Jobcentre worker from Ashton-under-Lyne: 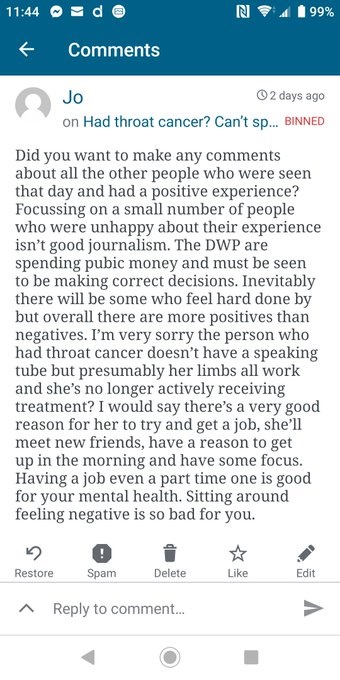 The comment did not impress one reader. They left this lengthy reply: 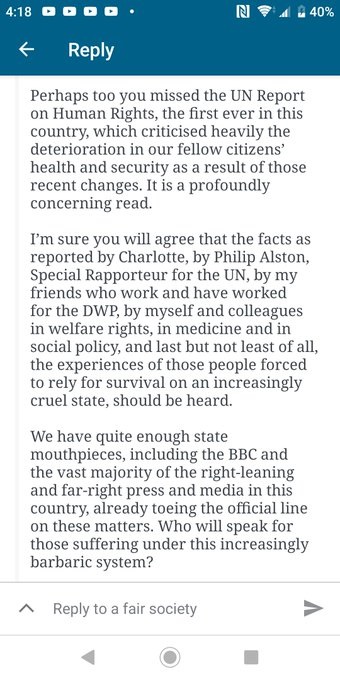 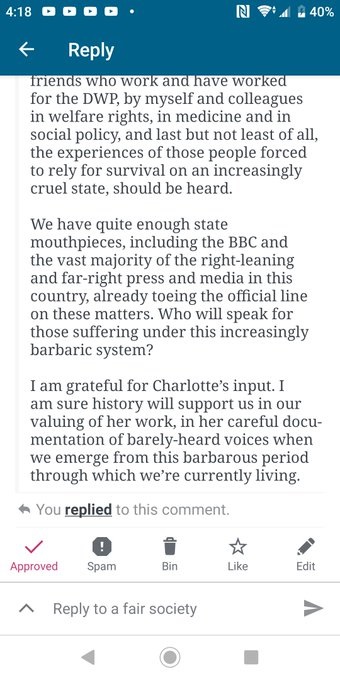 On Twitter, founder of Universal Credit Sufferer Alex Tiffin made his feelings clear:

🚨 The @DWP are trying to intimate tireless Welfare Campaigner @charlotteh71 through HER BLOG!

This is unacceptable and must be investigated immediately.

“I won’t be silenced”

I’ve been blogging about people’s experiences of the DWP, the Jobcentre and austerity. Every now and then I’ve noticed that a DWP employee comments saying that 1. I must be lying, and 2. the Jobcentre is an amazing place. This week, however, has been different. Not only has the DWP attempted to troll me via Twitter, they took it upon themselves to attempt to troll my blog.

I’ve always been proud of the fact that my blog has always been a safe place to be and to comment, as are my demonstrations.

The actions taken against me by the DWP have only proved that they like to bully people. I won’t be silenced by them though; everything that I wrote is true and witnessed. It’s important to continue to get the truth out there until they silence us forever.

The Canary asked the DWP for comment. But it declined the offer.

This is not the first time, however, that the DWP has taken aim at independent media.

There were a number of instances when, having asked the department for information, DNS has refused to reflect in its articles the answers provided.

In light of this, the editor of DNS has been advised that, if his organisation wishes to be treated as a bona fide news organisation by the DWP, then there is an expectation upon it that it acts in the manner of one.

But Pring was adamant this was not the case. He said he left out DWP comments because it missed the deadlines he gave it.

In Hughes’s case, it’s unclear who made the comment in question. Is it beyond the realms of possibility it was a DWP employee? Recall the scandal surrounding Integrity Initiative in 2019, where a government-funded group was intentionally posting anti-Labour content on Twitter. Anything is possible.

But even if a DWP employee isn’t behind the comment, it shows the disconnect between some people’s views of the Jobcentre and disabled people, and the reality.

Hughes and Pring’s problems with the DWP are unsurprising. Much of the corporate media skirt around welfare issues; or they play it fairly safe. But sites like DNS and The Poor Side of Life don’t pull their punches. They dig into places other journalists won’t tread. Both sites bring you perspectives you won’t normally hear.

But moreover, Pring and Hughes disrupt DWP narratives to the max. They represent so many claimants suffering at the hands of the DWP; the ones government and society have thrown on the scrapheap. That’s why the DWP targets them. And that’s why we must continue to support them.