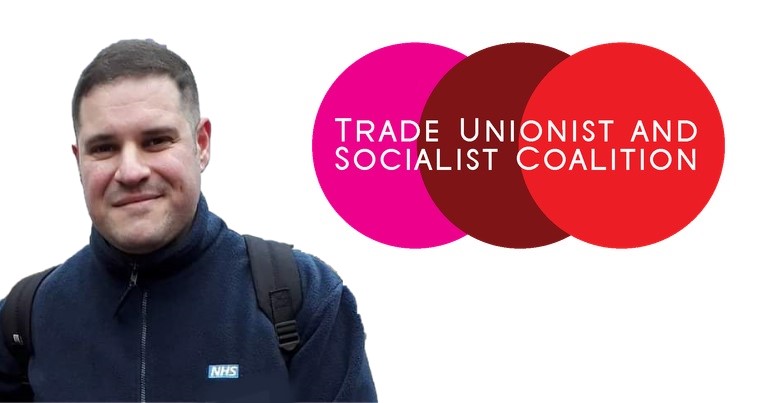 A candidate in the May local elections has pledged to give away his councillor allowance if elected. But the potential politician’s platform is also one with which many people could get on board. Because the coalition he’s standing with could be a potential new home for countless Jeremy Corbyn supporters who feel Labour is now letting them down.

The Trade Union and Socialist Coalition (TUSC) has been going since 2010. As its website states, it was:

co-founded by the late Bob Crow, with the primary goal of enabling trade unionists, community campaigners and socialists to stand candidates against pro-austerity establishment politicians.

Under Britain’s election laws candidates can only appear on the ballot paper as an ‘Independent’ if they are not endorsed by a registered political party. That doesn’t allow trade unionists or local anti-cuts campaigners to distinguish themselves as standing for something different to the mainstream. But using the TUSC name does.

It’s steering committee is made of members. It also includes reps from both Chris Williamson’s Resist movement, the Socialist Party, and the RMT union.

Former Labour MP Dave Nellist currently leads TUSC as its national chair. The coalition has had some success. It states:

Since 2010 hundreds of candidates have stood under the TUSC umbrella, polling over 375,000 votes.

A few have won council seats – while the TUSC candidate for Liverpool mayor in 2016 polled 4,950 votes (5.1%), coming in ahead of the Tories. This was the second time that TUSC has outpolled the Tories, the governing party, in a Mayoral election in Britain’s eighth biggest city. TUSC candidates’ average vote in local elections has been around 5%, despite a general media blackout.

Now, in North Tyneside TUSC is fielding another candidate. And this one’s agenda is particularly eye-catching. William Jarrett is an NHS worker. He’s standing in the city’s Riverside ward in North Shields. So, as part of our #MeetTheMovement series, The Canary caught up with Jarrett. We discussed TUSC, his bold agenda, and whether or not former Labour voters could find a new home in the organisation.

Jarrett isn’t new to TUSC. He’s been heavily involved in it for several years, and he’s clear on why he found a home with the coalition:

I’ve stood for TUSC once before, so it isn’t my first rodeo! What drew me to it was the appeal of something other than broken Labour, and that was in 2014. It’s something which celebrates the centrality of the working class and its organized movement as the sole agency to deliver genuine and socialist change.

TUSC has a fairly clear approach to politics. It allows people who share its views to stand as a candidate under its banner. It says that it lets candidates have “autonomy” over their campaigns, but they have to commit to TUSC’s core policies. Some of these include:

Jarrett says that TUSC “has grown exponentially” since its launch. It’s fielding over 330 candidates in May’s local election. On top of its core policies, Jarrett told The Canary that there’s an overriding drive in the movement to create something bigger. This is based around council budgets:

This is a local election campaign, so of utmost priority to us is council budgets. We won’t tolerate the ‘heavy hearts’ and ‘reluctantly no other choice’ rhetoric of any parties implementing cuts; those which have set us back a generation of more. We’re action-not-talk socialists, the genuine red article. We’ll build campaigns with council unions and any allies who’ll stand with us for needs budgets using all powers available, from use of reserves to prudential borrowing, and working alongside other socialist local authorities to fight this rotten Tory government until they relent. And, they will. It’s happened before and we’ll do it again.

TUSC is also all about local issues.

Many candidates have a sharp knowledge of the area they’re standing in. None more so than Jarrett, who told The Canary that one thing angers him most about the situation in North Shields:

When I first became a shop steward at the council I read a North Tyneside Council study which shook me to my core. It revealed that life expectancy from affluent and leafy Front Street in Tynemouth to Waterville Road in North Shields, very near where I live, drops by 11 years. That horrified me. It also made perfect sense however. This town has been decimated by Toryism and same-same, Blairite-riddled and cuts-bedevilled local Labour.

This is endemic of a national problem. The life expectancy gap between rich and poor has widened in recent years. It’s now 9.3 years for men in the most deprived areas and 7.5 years for women.

Councils and the government don’t pay local councillors. Instead, they get an allowance for their time and expenses. The amount varies wildly. For example, in 2018/19 the highest allowance was in Manchester (£16,926). The lowest allowance was in Torbay (£687). But this doesn’t matter to Jarrett. Because he’s going to give his allowance away. He told The Canary:

My political heroes are labour movement and socialist titans like TUSC’s national chair… Nellist, Terry Fields, Pat Wall, Matt Wrack of the FBU and Steve Hedley of the RMT. These were workers who went to parliament and still only accepted the wage of a skilled worker in order to identify with and relate to constituents. With so many out of work and an economy tanked by Covid capitalism, I won’t accept a penny. I’m fortunate to work in a reasonably secure job. I’ll donate the lot to strike funds and other good causes to demonstrate my sincerity to local people and to keep it real. Careerism is abhorrent. We’ve got councillors who are landlords.

Yes to independents by all means but especially yes to collectivism and getting organized. That’s the beauty of TUSC. As long as someone agrees our eight point minimal socialist programme, then they’re in. They can expand on it or promote other policies the other groups haven’t promoted which will go further. The all-important element is socialist unity. March separately, strike together.

And he said in his area TUSC is fielding a handful of candidates who are all actual working people:

My fellow candidates are just amazing. They represent every spectrum of work. We’ve got a taxi driver; a nurse; a blacklisted shop steward; a care worker; a mental health worker and a hospital porter. We’re all in unions. We’re all socialists. And whichever group we’re from we’re working like a well-tuned machine to create a socialist alternative in this beautiful but forgotten and neglected community.

But there’s no getting away from the fact that voters largely ignore local elections.

Turnout at local elections is consistently low. For example, in 2018 it was just under 35%. This is versus a 67.3% turnout at the 2019 general election. Yet as Voting Counts noted, local elections are important:

Your local council has an impact on many of the services you see and use every day, including housing, transport and public spaces. Choices made by the council will have visible impacts on your community

Jarrett recognises the disenfranchisement. And he understands it. But he told The Canary he’d urge non-voters to look at TUSC:

I don’t blame anyone who doesn’t vote in local elections. Who could? Look at the ghouls and opportunists occupying council chambers; balancing budgets on the broken backs of working class communities. No, we want precisely those people, by far the largest constituency nationally, to vote for us. And they can stand as TUSC candidates too. We aren’t conventional politicians. We’re the ones fighting to get rid of them all. And we’ll deliver the results which austerity parties faintly and falsely only ever promise.

TUSC appears to be a real socialist alternative. Since Corbyn’s departure, the actual left wing of Labour is looking increasingly politically homeless. So TUSC and its values could well be a new political home for many current and former Labour members. You can find out more about supporting or joining TUSC as a member here.

If you’re reading this and feel lost in your current political party, Jarrett has a message for you:

We did everything we possibly could to support Corbyn and orient toward his movement while crucially maintaining our political independence. If people supported Jeremy but recognise the need to go further, to press on, and to be as ruthless with this system as it will require to dispose of the old exploiters and oppressors with a fully anti-austerity and socialist fight from the bottom up, then we’re your candidates. We won’t compromise with any austerity parties. We’ll turn their old world upside down to suit us, the workers and youth.

Lots of people seek new political homes since Labour linked up with Tories to plunge knives in to Corbyn. To these newly politically homeless people I say: come on in. You’ll be among like-minded friends; people like you who want the best for the working class. And we will go to any length to fight to ensure they receive it.

Jarrett is a forthright, grassroots, and people-focused candidate. Moreover, in the age of career politicians and parties that change like the weather, TUSC seems to be a constant force for socialism in the UK’s democratic landscape. It will be interesting to see how the coalition fairs at the local elections in May.