We're in a climate emergency, but BBC Cymru didn't invite the Green Party to its leaders’ debate - Canary 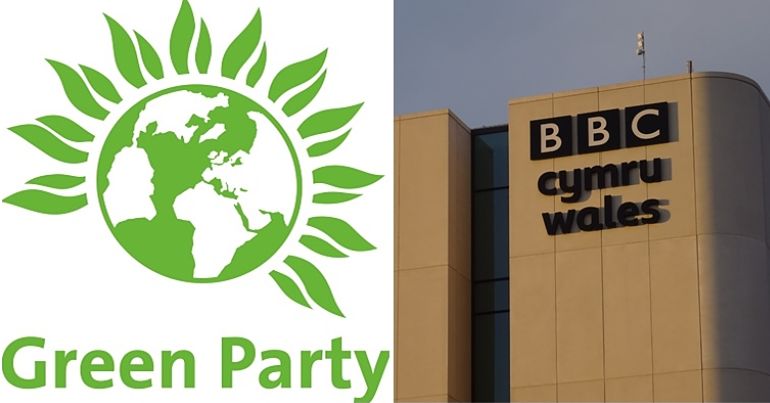 The BBC has invited leaders of Welsh parties to participate in the debate. That includes leaders from Plaid Cymru, Welsh Labour, Welsh Liberal Democrats, Welsh Conservatives, and Abolish the Welsh Assembly Party (AWAP).

In addition to the global pandemic, the election takes place during a climate emergency. So there’s a lot of surprise at the BBC including an anti-Assembly party while excluding a pro-environment one.

Excluding the Green Party during a climate emergency

The Welsh government, like others in the UK, has declared a climate emergency. So it’s surprising that the BBC excluded the Wales Green Party from the debate. While the party doesn’t have any members in the Senedd (MS), it has nominated 13 constituency candidates and 20 list candidates for this election.

It also has seven community councillors in Wales. And its leaders support Welsh independence. A spokesperson from Wales Green Party told The Canary:

The Wales Green Party were disappointed to hear that we will not be included in the televised debates for the Senedd, but that the Abolish the Welsh Assembly Party will be.

Given the fact that the last regional list seats in many areas will be between the Green Party and Abolish in this election, and our similarity in polling, it is undemocratic for Abolish to be given a podium ahead of the Greens. Abolish the Welsh Assembly promote far right ideals that aim to divide us at this time when it is more important than ever we come together as a nation, to recover from the devastating impact of COVID-19, to address the imminent climate crisis, and to build a secure future for Wales.

We will be reaching out to the BBC to discuss this further.

Some senior members of AWAP are former Tory and UKIP members. One of them tweeted misogynistic abuse about a member of Plaid Cymru.

Unsurprisingly, the party believes in abolishing the Assembly. It believes the assembly is unnecessary as Wales already has councillors and MPs. But since its beginning in July 2015, AWAP has never succeeded in getting any of its candidates elected to the Assembly. Moreover, the electoral commission struck it off the electoral register in November 2020.

Currently AWAP has two members (MS) in the Senedd. But these are both defections, so it still hasn’t elected anyone to the Assembly. So far AWAP has only announced 10 candidates, most of these in the south of Wales. Plaid Cymru opposes AWAP’s participation in the debate and referred to it as “at best, a regional party”.

What is the criteria?

Parties will be included if standing in at least one sixth of the total seats up for election in Wales (ie 10 constituency seats) or fielding at least four candidates in all five regional lists.

A spokesperson for BBC Cymru Wales told The Canary:

BBC Cymru Wales will be providing a range of content and debating opportunities on television, radio and online in both English and Welsh during the forthcoming election campaign.

As part of our commitment to provide news, analysis and scrutiny, there will be one Welsh leaders’ debate programme on BBC One Wales on 29 April. In determining the composition of the panel for this programme, we were required to make an editorial judgement with regard to what is an appropriate level of coverage. That careful judgement has taken account of past levels of electoral support, as well as any robust trends in current support and confirmed levels of candidacy.

We are confident that our editorial processes have been fair and impartial whilst reflecting the reality of the Welsh political landscape. BBC Cymru Wales will continue to provide full coverage of the election campaign, and key issues including the environment, across all its news platforms.

Moreover, the Green Party isn’t the only one the BBC has excluded. Propel and GWLAD have also been excluded from the debate. The Canary contacted them for comment. A policy spokesperson for GWLAD – who believe in “an independent sovereign state for Wales” – said:

It didn’t really occur to us that we might be invited at this point.

Once the 8th April registration date passes, we expect to have qualified according to these criteria by having fourteen constituency candidates and the requisite four or more candidates on each list. The BBC have approached us, and they are aware of our intentions, and the seats in which we intend to stand. We are therefore expecting to be fully included in the campaign from that point on, and will naturally raise it as an issue if that proves not to be so.

Legal action against the BBC?

Propel claims to be:

a grassroots political party that campaigns for individual, community and national sovereignty for Wales.

And Neil McEvoy from Propel said the party had requested to participate and is:

currently taking legal advice to explore the legality of the BBC’s decision to exclude us.

The BBC’s methodology clearly favours the establishment parties by placing heavy emphasis on past levels of election support. This is a barrier for new parties like Propel, particularly when these elections are about deciding the future of Wales. The BBC’s Charter means they should be trying to educate and inform people ahead of the election. That means educating people about their choice.

The public should know that there is a Green Party, an Abolish Party and a new party like Propel, who want to end Welsh lockdowns for scientific, medical and compassionate reasons. But instead of getting a debate that includes the full range of ideas on offer, what the public is going to get is some theatre between a handful of establishment parties who are all very friendly with each other behind the scenes, as evidenced by the booze up in the Senedd between Labour and Conservative MSs.

Writing for Nation Cymru, David Hannington-Smith said it was wrong for the BBC to invite AWAP to the debate. AWAP disagrees, because it claims it has higher ratings than the Lib Dems.

But regardless of the criteria, it’s strange that a party that wants nothing to do with the Assembly also wants to be in the Assembly debate. Especially as it also believes in greater Westminster control. Yet somehow there’s no place for the environmental party, which also happens to support greater independence for Wales.