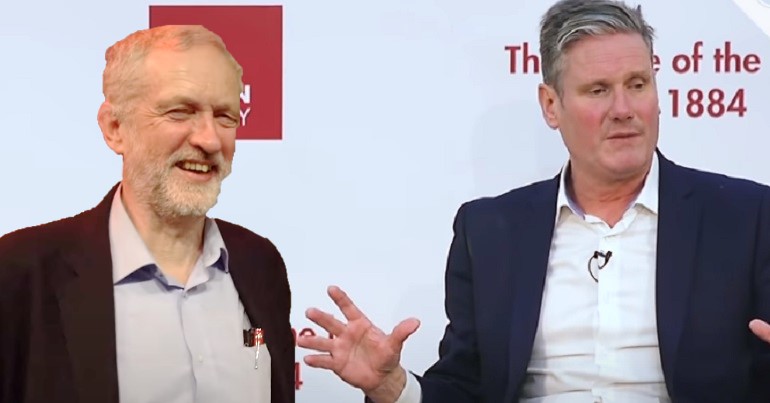 This week was Keir Starmer’s first anniversary of being Labour leader. So, enter Jeremy Corbyn to show us what a mess Starmer’s made of it.

Starmer’s time as leader has been both contentious and unsurprising. From a series of rebrandings to writing in right-wing papers and ‘out-Torying the Tories‘, Starmer has been dire. Rachael Swindon noted in a recent article that:

On Good Friday, Starmer managed to clusterfuck again. Because he visited a homophobic church. But it was perhaps Joe‘s mock-up of Starmer in the Disney song I Wanna Be Like You which best summed up his time in charge:

So, all in all, Starmer is proving a disaster. Now enter Corbyn to remind everyone how leadership should be done.

Corbyn was speaking at a London #KillTheBill demonstration on Saturday 3 April. He said that the Police Bill protests:

should also be taken in the context of a series of piece of legislation that this government is trying to push through that place over there [parliament]. The Spy Cops Bill; the Overseas Operations Bill; all these bills designed to empower the secretary of state to legislate beyond the powers of parliament; to restrict protest; to organise counter surveillance operations and so many other things.

People have criticised Starmer for his leadership (or lack thereof) on all those bills. Whereas Corbyn? He was forthright and standing with the people:

“it’s the brave people who have stood up that have changed history” –@jeremycorbyn. he goes on to talk about the history of struggle, from suffragettes, trade unionism and the anti-apartheid movement and how integral protest has been too them.

“i stand with the gypsy, romani and traveller community” says @jeremycorbyn to huge cheers before stating “the road to oppression is the silence of the majority”

The former Labour leader wrapped-up his speech by saying:

Jeremy Corbyn wrapping up his speech on why protest needs to continue if society is to change for the better. #killthebill pic.twitter.com/cBMoNdHTKR

People on social media were impressed:

Seeing this reminds me why I admire him so much. He may never be PM but he speaks in ways I can connect with. I'm so glad to see him still campaigning like this.

After #AYearOfKeir Jeremy Corbyn remains both a breath of fresh air & a political inspiration to many. Still seriously annoying all the Right people too ✊✊✊ pic.twitter.com/mUtkPS5jxO

“My voice will not be stilled, I’ll be around, I’ll be campaigning, I’ll be arguing, & I’ll be demanding justice for the people of this country”@JeremyCorbyn meant what he said.

A true servant of the people; titles are good, purpose better.

Sadly, Corbyn’s voice is now a minority in parliament. And his message is far removed from Starmer’s.

Could it get any worse?

As Swindon summed up:

I can already tell you how the Labour Party will disappoint us today, and I mean *this* Labour Party.

Could the next year of Starmer’s leadership be worse than this one? Yeah. Don’t answer that.