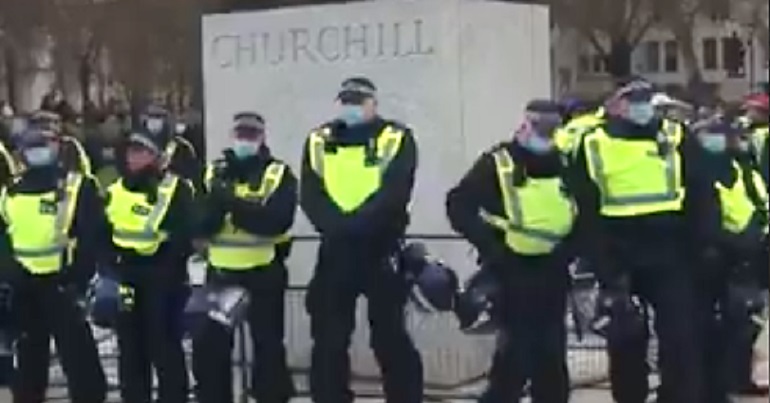 The policing of the bank holiday weekend’s #KillTheBill demos showed the further creep of corporate fascism in the UK. But instances from the protest haven’t been the only examples of this in recent days.

The creep of UK corporate fascism

As The Canary previously wrote, there are signs the UK is turning into a corporate fascist country. We quoted Johanna Drucker who said of the US under then-president Donald Trump:

Fascism is defined as the alignment of power, nationalism, and authoritarian government. We are there. The power is capital linked to politics.

Corporate fascism is wanton, virulent, and unregulated. Wanton because it has no regard for consequences… Virulent because the full force of inflamed populism is fuelled by self-justified rage and unbounded triumphalism. Unregulated because the capital is now amassed in extreme concentrations of wealth without any controls.

Historian Laurence Britt wrote in 2003 about the 14 signs of a fascist regime. And previously The Canary ticked them all off for the UK. For example:

Now, it seems other examples are coming thick and fast.

During #KillTheBill protests on Saturday 3 April, police were once again protecting the Winston Churchill statue:

huge number of riot police just been marched in to protect the churchill statue (which has been largely ignored by protestors) pic.twitter.com/St2gngKhEW

Britt may well describe this as “powerful and continuing expressions of nationalism”; another one of his fascism warning signs. And he may well say it about a Tory MP saying schools should fly the Union Jack. And if they don’t? Tory MP Tom Hunt thinks they should be “educated”. Nothing to see here:

The flying of the Union flag should be compulsory for all schools. If any pupils and teachers have concerns about this then surely they can be “educated” about what the flag actually represents. 🇬🇧 belongs to every single British person. https://t.co/hlbxYrlJaE

Further, and also at a London #KillTheBill demo, police arrested yet more legal observers. This sounds eerily similar to Britt’s notion of fascism’s “disdain for the importance of human rights”:

Legal Observers help make sure the people's right to protest is respected, and the police act within the law. https://t.co/VUdYhJzLyQ

Then we have Britt’s idea of fascism being defined by “rampant cronyism and corruption”. Byline Times reported on 29 March that:

Since the beginning of the Coronavirus [Covid-19] pandemic, Byline Times and The Citizens have found that 57 contracts – worth some £944 million – have been awarded to 15 companies with directors, or people with controlling interests over these companies, who have donated £12 million to the Conservative Party.

That’s the Tories bunging nearly £1bn of contracts to their mates.

And to top it all off, vaccine passports are on the way:

🚨 BREAKING: Full list of places where Covid passports will be needed pic.twitter.com/Ux0srztiSR

This is despite vaccine minister Nadhim Zahawi previously saying the government wasn’t planning on implementing them. And it seems that the public supports them; or rather a Mail on Sunday commissioned poll says they do:

According to Britt’s notion of fascism, this may well be “identification of enemies/scape-goats as a unifying cause”. That is, when coronavirus once again takes hold, the Tories can blame people refusing to have the vaccine for spreading it. And if you do, you can officially be identified as such.

Time is running out

All the warning signs of the UK heading into corporate fascist territory are there. It’s time people recognised this – because time to change our trajectory is seriously running out.