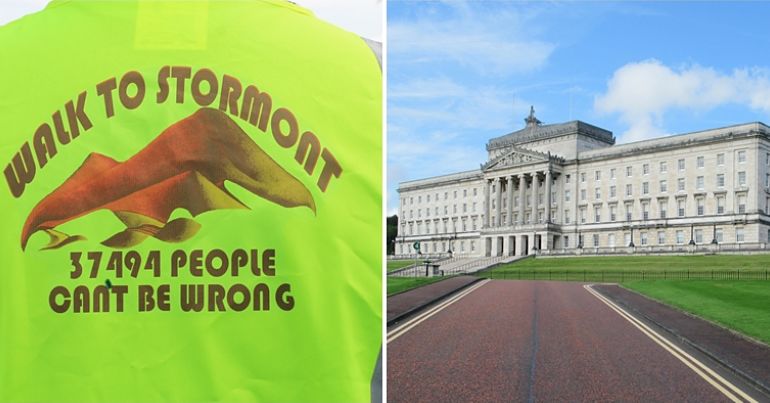 From 18 to 20 June, community activists from across the Sperrin mountains, from Greencastle to County Tyrone, are walking 60 miles to Stormont, the Northern Ireland Assembly. They’re walking to remind elected politicians that:

people have said a massive NO to Dalradian Gold

When they arrive at Stormont, they’ll hand over a letter to ministers and MLAs (elected members of the Northern Ireland Assembly) to voice their concerns about Dalradian’s goldmine application. As previously reported by The Canary, people living in the area strongly oppose Dalradian Gold Ltd’s proposal.

This affects a number of communities

Judging by the variety of people who spoke to The Canary on Saturday 19 June, opposition to this goldmine goes way beyond the community of Greencastle. Because people from communities from all over the Sperrins and from counties Tyrone and Derry took part.

Not just one mine

A couple from Sawel mountain, the highest peak in the Sperrins, said they oppose what’s happening in Greencastle because, should Dalradian get the go-ahead in Greencastle, there could be “mines all around the Sperrins”.

Dalradian Gold is owned by Dalradian Resources Inc. Its CEO Patrick Anderson outlined his intention when he said:

I’m not talking about a single mine. We are working on building a mine camp here.

Several people on this walk were also dismissive of Dalradian’s job creation claims. Dalradian promises that the mine will create “some 1000 jobs and inject £750 million into the local supply chain”. A member of Lissan Against Mining said “we don’t need those kind of jobs” and she added:

a few jobs at what price? I don’t think it’s worth it at all

A member of the Protect Slieve Gallion group said she was struck by:

the horror, the thought of toxic gold mining coming into the community

She feels there’s already plenty of employment in the area in agriculture and tourism, so the goldmine “is not wanted”.

Gordon Dunn, from Cooperate Against Mining In Omagh (CAMIO), also questions such claims. He said local companies in the area have difficulty recruiting people at the moment. He also wondered why, if the cash injection was so great, Dalradin refused to pay their police invoice of £400k for security at the mine.

None of those who spoke to The Canary on Saturday believe Dalradian’s claim that the mine is “carbon neutral”. Dunn dismissed it saying the mine would produce “extensive amounts of carbon” and other pollutants. So while Dalradian claims to be offsetting its carbon, it’ll still be generating significant pollutants according to Dunn. He feels “it’s a ploy to get the public behind [Dalradian]” and that the project is “purely fuelled by greed”.

The couple from Sawel mountain were particularly worried about the damage the goldmine could do to “the quality of air and the water”. And the fact that goldmining could take place in an area where there are high levels of radon, exposure to which can cause cancer.

Kelly said she’s “very definitely against mining” because of:

the potential threats it makes to our health and to future generation’s health, to the threat to the environment and also to the threat of community structure

a sales company… they can make all these promises but… human error exists. And it only takes one person to make a mistake [that could have environmental implications]… and we’re going to be paying the cost of that for maybe hundreds of years… it could have massive adverse affects

they don’t have a community licence, they’re not wanted in the area

Where are the politicians?

He feels of all of the challenges he’s come up against, “this is the biggest”. And while established political parties have offered words of support to the campaign, according to McClean, their actions in “assisting us and our campaign have been negligible”.

Campaigner from Greencastle Martin Tracey told The Canary that this weekend’s walk:

shows people are not prepared to lie down any more for big corporations.

it’s the people that’s driving this, it’s not the politicians

Tracey noted there’s been a “lack of support from the political parties” on this issue. And that as the campaign is “cross community”, political parties don’t want to see this as it makes them irrelevant.

Dunn added that the walk is about “taking the message to our government” because they’re failing to address it.

Since the beginning of the walk, campaigners have displayed a banner highlighting the 37,494 letters of objections to the proposed goldmine. The number of objections has only continued to grow since the banner’s creation.

The walk concludes at 5pm on Sunday 20 June when walkers hand their letter in to Stormont. But this is just the end of this particular action. The wider campaign goes on.