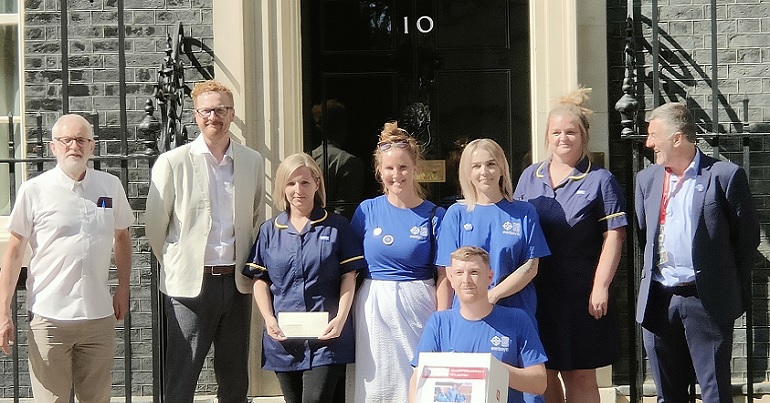 THIS ARTICLE WAS UPDATED AT 3:45PM AND 7PM ON WEDNESDAY 21 JULY TO REFLECT BREAKING NEWS

On Tuesday 20 July, a group of NHS workers visited Downing Street. And on behalf of over 800,000 people, they told Boris Johnson that enough is enough over the dire state of NHS pay. Oh, and a certain former Labour leader also helped out.

This year, the Tory government has been at the centre of a storm over NHS pay. First, it was only going to give them a 1% pay rise. Now, the Tories are reportedly considering a 3% rise instead. Wow. Then, on Wednesday 21 July the Tories “scrapped” their announcement on the pay rise. People were saying that it may be delayed until September. Double-wow. But then, at around 6pm the Tories backtracked again – announcing the 3% pay rise would go ahead; backdated to April.

So, the grassroots campaign group NHS Workers Say No has been running a petition. It calls on the Tories to give NHS staff a 15% or £3,000 pay rise – whichever is the greater.

As of 1pm on 21 July, over 812,000 people had signed the petition. You can add your name here. On 20 July, NHS Workers Say No took some forthright action over it. They held a rally outside parliament before taking the petition to Downing Street. And the event was heart-warming and well-executed: 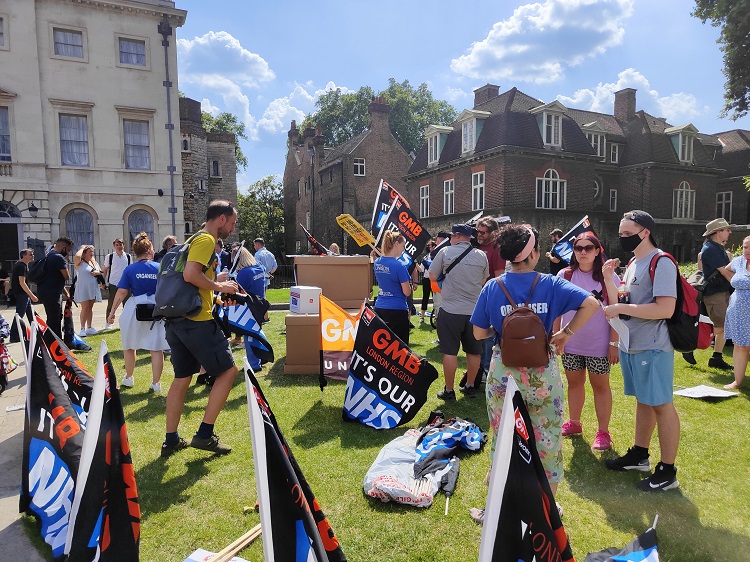 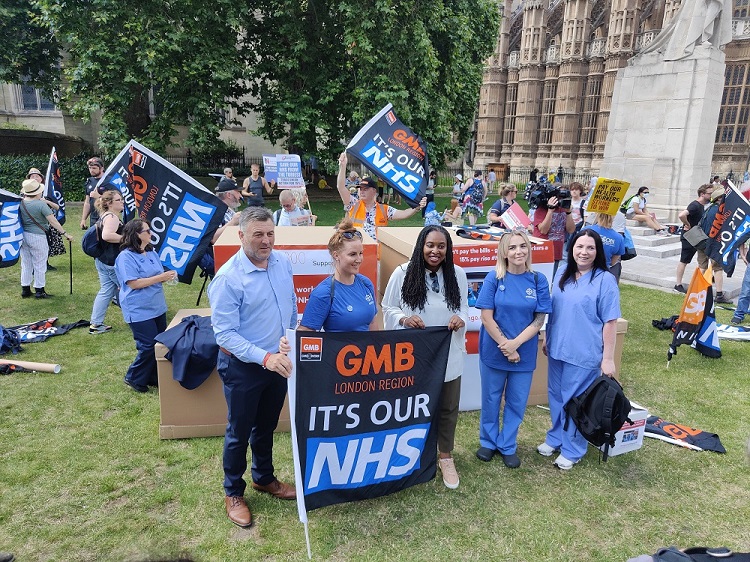 Rallying for the cause

NHS nurse Matthew Tovey started the petition around a year ago. He told the rally that:

My journey here to parliament started a year ago to the day. Rishi Sunak announced a public sector pay rise for all workers… But NHS staff got nothing, despite the weekly clapping; despite the praise from ministers… We were all hailed as heroes and angels, working in unimaginable conditions with limited resources and scarce PPE. It was a terrifying experience.

Instead of a pay rise, we get a pay restraint… [The pay offer] is pathetic, pitiful and poor. We’re merely asking this government to pay healthcare workers a decent wage… Claps don’t pay the bills.

The rally also got the support of several left-wing MPs. Jon Trickett, Ian Byrne, Richard Burgon, Lloyd Russell-Moyle, and Dawn Butler all joined it. Butler was abused by anti-lockdown, coronavirus-denying protesters. But she carried on regardless:

Now the anti-lockdown goons are throwing abuse at @DawnButlerBrent at the #NHSPay15 @NurseSayNO demo pic.twitter.com/leNoUHG2nD

It should be noted these protesters also disrupted the opening of the rally. They shouted abuse at the NHS staff present. Eventually, police moved them away – but only after Butler was targeted.

All the MPs spoke. Burgon said that he and his constituents were with NHS workers “every step of the way”:

not only in this fight, but also in the fight to stop the Americanisation of our NHS. And also, in the fight to make that empty rhetoric of ‘build back better’ into something real… the society we build together out of this coronavirus pandemic is a society that puts the wellbeing of all, and the health of all, and the enjoyment of life for all ahead of those corporations, ahead of big business, and ahead of the warped, free market fundamentalist world-view of those Tories in Downing Street.

The rally then made its way to Number 10: 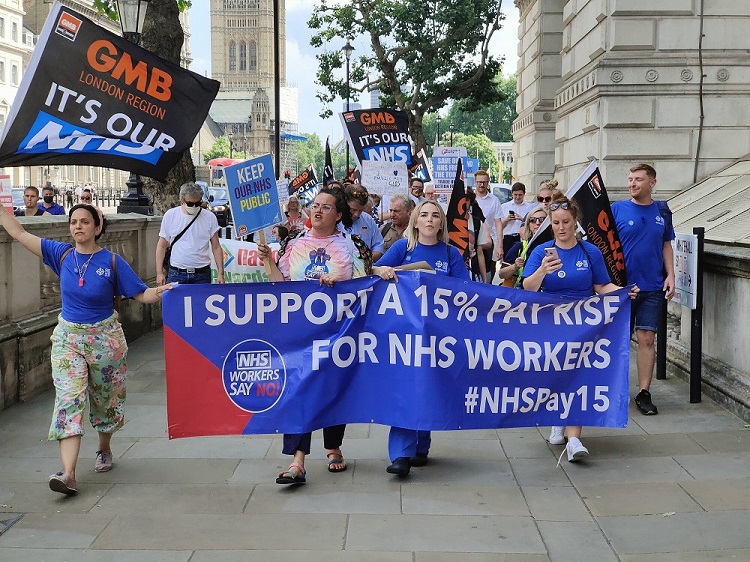 The group certainly made some noise heading to Downing Street:

There, they met Jeremy Corbyn. He spoke to the crowd outside Number 10. Then, he delivered the petition with them: 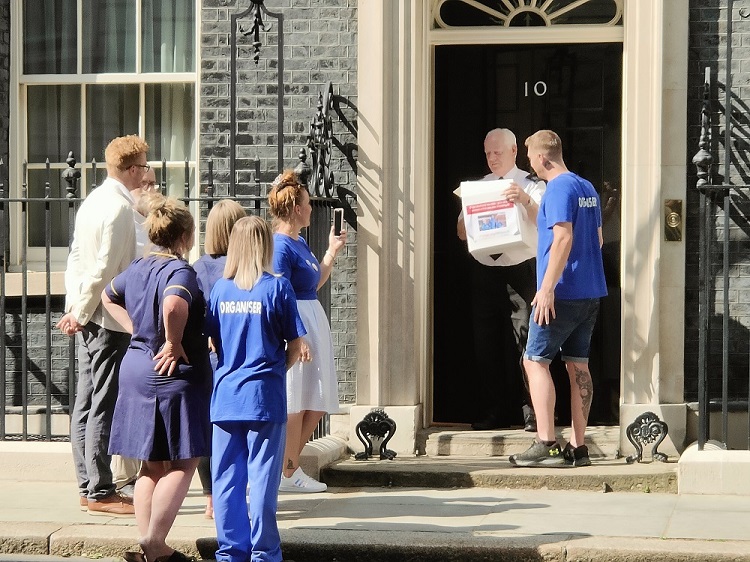 It was a good feeling to come to Downing Street. But we shouldn’t have to do this. For a lot of this, it’s our annual leave or rest days. We should be spending it with our families and chilling out. Not coming to London and walking the streets to hand in a petition to make us be safe at work… I think it will be a 3% rise. But it’s not a pay rise, it’s further cuts to our pay. So, the fight will carry on.

And, at the end of the day, the NHS workers went for a well-deserved drink:

On Thursday 22 July, Trickett will lead the debate on the petition in parliament. Sadly, it’s unlikely to bring about change in relation to NHS workers’ pay. But that’s not the end of the story.

The public: now it’s up to you

The fact that a group of frontline NHS staff managed to gather the signatures of around 800,000 people over their pay is impressive. It’s more impressive that NHS Workers Say No did this all in around 12 months. And it also shows the strength of public feeling over the issue. Moving forward, if a 3% pay offer does materialise, voters may well remember that. As Butler said, Johnson doesn’t seem to ‘have a heart’. Given the amount of clapping he told the public to do for NHS staff, his position now exposes his actual disdain.

The hypocrisy of the Tories is there for all to see. Now, it’s up to the public to stand up for the NHS and its workers by taking action.