With a 99.7% conviction rate, it's time the Israeli military courts went on trial - Canary Workers’ Co-op 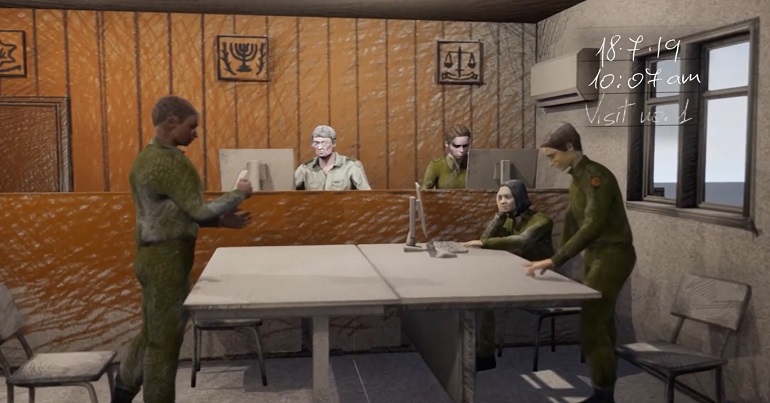 The system of dragging Palestinians before Israeli military courts is seemingly little more than a sham. In 2011, +972 Magazine reported 99.7% of Palestinians in the West Bank were convicted in such trials. The trials usually last about 10 minutes and the testimony of an Israeli soldier is enough to secure a conviction. So the court is little more than:

a place of transition…between the freedom you had as a subject of occupation closed within walls and checkpoints and the prison cell where you will probably be imprisoned for the next few years.

The odds of a fair trial are stacked against Palestinians. They’re conducted in Hebrew and the poor translations do little to help Palestinians understand what is happening or even what they’re accused of. So each trial essentially boils down to plea bargaining. The Palestinian defendant pleads guilty to get a lesser sentence.

But does any of this really surprise you given what we know about the apartheid state of Israel? Probably not. Indeed, it all sounds pretty familiar to be honest. That is, of course, until you hear about the trial of a human rights defender from Hebron, Issa Amro. Amro’s case is interesting because he’s one of the .3%. And while he wasn’t acquitted of all charges against him, he was acquitted of the majority.

Now, he and Israeli playwright Einat Weizman want to highlight his case to motivate people around the world to take action. They’re currently rehearsing a play about his case which they hope will motivate us to “make a revolution”.

Weizman’s video gives an idea of the situation with military courts:

In January 2020, an Israeli military court convicted Amro “of 6 out of 18 charges that were labelled by Amnesty International as ‘politically motivated'”. But unlike most other Palestinians, Amro received a proper trial. He was defended by Israeli lawyer Gabi Laskey. Weizman told The Canary she believes he’s in the minority because of his status as a human rights defender and the presence of foreign diplomats at the trial.

And while Amro avoided going to prison, he received a fine and a suspended sentence. He told The Canary he’s appealing this in January 2022. And while it’s good news he wasn’t sent to prison, what of the 99.7%? What can be done about those people? This, in part, is his motivation for collaborating with Weizman. Amro said he sees the play as:

part of the activism against the Israeli occupation

He sees his appeal hearing in a similar light. Because he’s appealing to:

challenge the military court and to confront the military system. Because as Palestinians we are not allowed to practice our general assembly…which is allowed according to the international law.

Weizman’s play will take a fresh and creative approach to resisting the Israeli occupation. She’s calling it How to Make a Revolution? The three acts of the play puts the sham Israeli military court system on trial.

The first act is located in Ofer military court. It explains the trial details and how Amro managed to escape the system. Meanwhile, Amro will provide commentary that deconstructs the military court system and shows how it operates. This style of delivery allows him to charge Israel for its crimes as well as describing how he became an activist.

The second act includes the role of Palestinian Authority (PA) and how it also went after him. This act describes the PA as the “sub-contracts of Israeli occupation”. The final act is set in a centre in Hebron run by Amro. This centre represents “liberated territory”. It’s where Amro and others can act, give lectures, invite groups, and talk about resistance. Amro uses this part of the play to answer the question of “How to make a revolution?”. This response, according to Weizman:

is a direct action [that] you see on stage. It’s art.

But of course to know more people will have to go and see it. Weizman and Amro believe this will help make a difference for Palestinians fighting the Israeli occupation.

Time to “make a revolution” – a British legacy

Weizman said they’re currently making a demo of the play. They’ll then show it in the UK, Norway, and the United States, as well as other countries. In each country they’ll try to connect that particular country’s role and history in Palestine with the current apartheid situation.

Weizman told The Canary the military court system is directly related to the former British mandate in Palestine from 1918 until 1947. She said in the play we draw:

a line between the Israeli colonialism to the British colonialism to show the British audience their responsibility for this situation. Because they…still have a responsibility. And their legacy is part of what is happening these days. The mandate rules are still being used in the military courts. So it’s not like something that is happening in a long distant strange country. It’s something that people here (in the UK) have the responsibility for

She said if they take it to the US, they’ll use it to show US citizens their responsibility in Palestine. In Norway, they’ll “take out the British mandate and we will put the Oslo agreement in”, to show Norwegians their responsibility. The 1993 Oslo agreement was supposed to be a peace agreement between Palestine and Israel. However, Palestinian activist Mustafa Barghouti described it as:

the greatest idea Israel ever had. It let them continue the occupation without paying any of the costs.

Weizman says the key message of the play is its name: How to make a revolution? So it’s not just about watching the play – but also doing something about the occupation of Palestine. She says one piece of action involves boycotting Israel.

Naturally, putting together such a production involves a cost. So the organisers are asking people to give whatever they can through a gofundme page. This will also help to get the play’s message out there. Fundraiser Natalie Strecker said:

Your support will help us to expose the workings of the occupation, give a voice to those it tries to silence, and – ultimately – work towards its end. Small acts can make a big difference.

Weizman hopes the play will go online on the Finborough theatre’s online channel and from there they can take it around the world and get people to take action. Amro urges people in Ireland and the UK to:

Keep doing the good work and not to lose hope. And to continue their awareness, their networking their support and to think about how to make the occupation costly. And to write to their officials, meet their officials…do social media, do actions and activities.