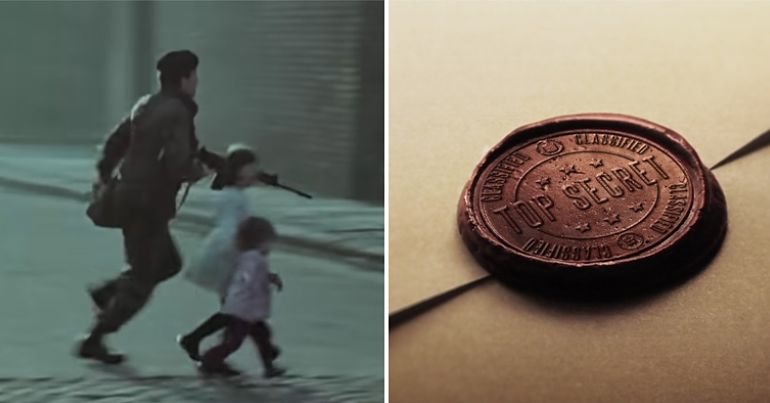 For much of the last 20 or so years, the north of Ireland wasn’t used to being front and centre in international headlines. But thanks to the DUP and other hardline Brexiteers, that’s exactly where it was as 2021 began. And thanks also to a Brexiteer Tory government, the north made headlines for another reason. This time for the conflict that, largely speaking, fell silent in 1998.

As I’ve written extensively for The Canary, the peace we’ve had in the north in the last 23 years has been an uneasy one. Part of what makes it so uneasy is the tin ear the British government gives to victims’ families.

The government’s insensitivity and deafness was especially loud and clear in July. Because that was the month secretary of state for Northern Ireland Brandon Lewis confirmed plans for an amnesty that could see British forces evade justice for their crimes in Ireland. And not only that, as if to consolidate its vision of the past, in November the British government announced plans to rewrite the history of that conflict. The Telegraph said the government feared “creeping revisionism around the role of the IRA and the atrocities it committed”. Oh the irony!

However, regardless of Britain’s tactic to conceal its dirty past in Ireland, the families of those who died at Britain’s hands have not relented. They continued their pursuit of justice for their loved ones into 2021. And it’s their bravery, not the callousness of the UK government, that will be the lasting memory and message of legacy issues in 2021. This article is another in The Year In Review series. You’ll be able to catch up on the many of the other review articles here.

But it was Labour which was first up

The year actually began with an example of historical revisionism from the Labour Party. This was evident when then shadow secretary of state for Northern Ireland Louise Haigh ran an online “education programme” about the 1998 Good Friday peace agreement.

Haigh invited professor Jon Tonge from the University of Liverpool to address her first seminar. According to Tonge, the conflict began at the collapse of the 1973 Sunningdale agreement. Sunningdale was an attempt at power-sharing in the north which collapsed after five months following British loyalist opposition.

As I wrote at the time, in addition to ignoring the first five years of the conflict, Tonge completely omitted Irish republican concerns and the violent British repression against Irish Catholics and republicans. Republican paramilitaries – as they’d wanted since the war of independence over one hundred years ago – were fighting for a united Ireland. Tonge also ignored that the 30-year conflict was in part born out of the repression, by the British state and its agents, of peaceful protests in 1968.

In March, when Connla Young of the Irish News revealed the “blood-soaked journey” of a British loyalist gun, it revealed a double standard in the mainstream media’s reporting on the north. Loyalists imported that gun, along with many others, to murder Irish republicans and innocent Catholics during the conflict.

Unfortunately, though, Young’s journalism is an exception in the mainstream. Because his colleagues don’t display an ounce of his courage. Instead they portray today’s loyalists who oppose the current post-Brexit arrangements in the north, as an “umbrella group”. Lobbyists, if you will. Yet these loyalist groups are a direct descendant of the gangs, who once acted as the death squads of the British state. But this hasn’t stopped the mainstream media giving them pride of place. What did the Telegraph say about “revisionism”?

As they admit one, another resurfaces

In May, a coroner declared 9 of the 11 Ballymurphy massacre victims, shot by the British army, were innocent. Victims’ families already knew this just as they knew all 11 were innocent. These innocent people died following the invasion of over 600 British soldiers into the Ballymurphy area of west Belfast between the 9 and 11 August 1971. This British invasion marked the beginning of the British policy of imprisoning Irish Catholics and republicans without trial – internment.

Following the coroner’s announcement, we were reminded how Ballymurphy was far from a one off. Thanks to the relentless diligence of legacy researchers at Paper Trail, new evidence indicates “a major British military operation about to begin in the vicinity”, at the time 13-year-old schoolgirl Martha Campbell was murdered in May 1972. But with this proposed amnesty in place, would anybody face trial?

Never believe anything until it has been officially denied, goes the adage. Well, the Tories weren’t denying anything as such, they just don’t want anyone to talk about British crimes in Ireland.

In July, a series of announcements came that amounted to a denial of any wrong-doing. In early July, the Public Prosecution Service (PPS) announced it would drop the cases against two British soldiers for the murder of three Irish people in Derry in 1972. The PPS claimed there wasn’t a reasonable chance of either soldier being prosecuted.

Later that month, Lewis announced plans to grant an amnesty to British forces, and paramilitary groups, who fought in the 30-year conflict. As I wrote at that time:

And while some in the mainstream media, and Labour party leader Keir Starmer, say Lewis’s proposal means an amnesty “for terrorists”, the reality is quite different. Because given the lack of prosecutions compared to the eventual admission of wrong-doing by the British establishment, it looks as if the British establishment is trying to whitewash its record during that 30-year conflict.

The British state continued to white-wash when it met with a human rights group who represent victims’ of British state violence, soon after Lewis’s announcement. From that meeting it seemed as if the British government was, at best, trying to minimise its role in the conflict in Ireland. It claimed British security forces were only responsible “for around 10% of Troubles-related deaths” and that “the vast majority… were lawful”. A state of complete and deliberate denial.

Human rights groups continued to call out the British establishment’s lies through their research and a day of nation-wide action in Ireland in September.

It is without doubt thanks to the tireless campaigning of a dedicated few that the British cover up campaign will never be normalised. We were reminded of this throughout the year and especially every December when we remember the 15 people murdered as a result of the McGurk’s Bar bombing in Belfast in 1971. Campaigners continue to expose Britain’s role in this bloody act of slaughter, and its role in deliberately and falsely blaming Irish republicans for the carnage.

So it’s somewhat fitting, if not poignant, that the year ended with the UK Supreme Court highlighting a cover up relating to alleged torture in Ireland. The court found the police’s failure to investigate allegations of torture against the “hooded men” was unlawful. In 2014, the Irish state broadcaster RTÉ, showed these men had indeed been tortured by the British state. The British also replicated these torture techniques in Iraq in 2003.

Try as they might, the British establishment will not succeed. Because the campaign for justice goes on. And the more the British cover up, the more these campaigners fight. As such, it’s fitting that the final word should be left with them. Ciarán MacAirt of Paper Trail told The Canary that 2021 was “very much a double-edged sword”:

The British state has re-traumatized families across these islands because of its endless threats to dismantle the Stormont House Agreement unilaterally and to enact its pernicious Legacy Bill. The British state’s mask has slipped and it wants to bury its war crimes and protect its killers whilst denying bereaved families equal access to due process of the law. The British media’s mendacity in reporting this assault on basic human rights was similarly damaging to families too.

Nevertheless, the dignity, fortitude and bravery of these ordinary families were beacons throughout the darkness and deceit of 2021. These heroes are my highlight as they have demolished the falsehoods of a powerful state and relentlessly succeed in this state’s own courts. It is their heroism in fighting for truth and justice that has driven the British state to break international and domestic human rights law. The perfidious British state is running scared because it murdered its own citizens and covered up its crimes, but did not account for a basic human emotion – love. That is what is driving each and every family member and that is why Britain is in such trouble.

We at The Canary look forward to highlighting that bravery and heroism in the years to come.